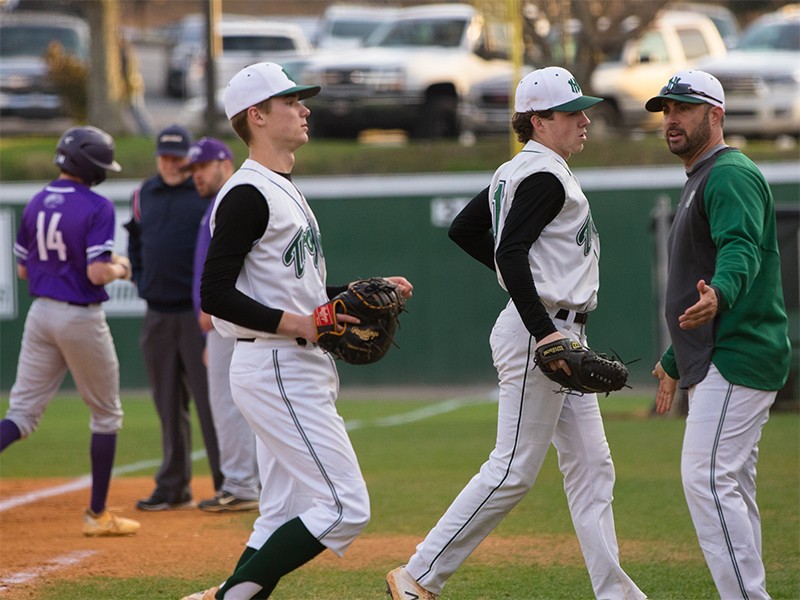 The win dropped the Trojans (13-9, 12-3) into a tie with Fannin County, who swept Cherokee Bluff in a doubleheader on Thursday.

As for Lumpkin, although a big win, leaves the Indians (11-11, 6-9) on the outside looking in for a playoff spot with two weeks left in the regular season.

Grizzle, however, had the last laugh on Thursday when he ripped a two-out single to right field scoring Braylen Chastain and Nic Turner to upset the Trojans. He finished the day 1-for-2 with two RBIs.

Dalton Stephens went the distance for the Indians, giving up three earned runs on seven hits while striking out eight Trojans.

The game seemed to be in control for the Trojans. They hammered out to quick runs to take a 2-0 lead in the top of the first inning. Jackson Dyer drove in Caleb Wiley and David Seavey scored on a wild pitch in the inning.

The Trojans added a run in the third inning off an error at home plate and one in the top of the sixth to take a 4-0 advantage.

Lumpkin’s bats came alive in the bottom of the sixth inning. Chastain started the inning with a double to left field. A batter later, he scored off an error by the Trojans. Later in the inning, Connor Pierce ripped a hard ground ball to left field, scoring Turner and Dalton Caldwell. The runs closed the gap, 4-3, going to the final inning.

Stephens and the Indian defense sat the Trojans down in order in the top of the seventh inning to give them a chance to rally in the bottom.

Lumpkin reached on an error, walk and a single in the bottom of the seventh before Grizzle drove in the winning runs.

North Hall faces a three-game series against Region 7-3A co-leader Fanning County. The Trojans will travel to Fannin on Tuesday at 5:55 p.m.

Baseball: 'Moving week' continues for area teams in key showdowns; rain forces changes
Several northeast Georgia area teams have a chance Wednesday and Friday to begin to put distance between themselves at the top of their respective regions, or get back into the playoff race...
By Jeff Hart

Baseball: Bluff beats Fannin in crucial Region 7-3A battle; Jefferson rolls
Cherokee Bluff added two insurance runs in the top of the seventh and held on in the bottom to knock off Fannin County, 9-6, Tuesday afternoon on the road.
By AccessWDUN Staff
Privacy | User Agreement | Contact | Advertise With Us
2021 © Jacobs Media Corporation. All rights reserved. EEO Report. Website by Full Media
Login / My Access
close
Search