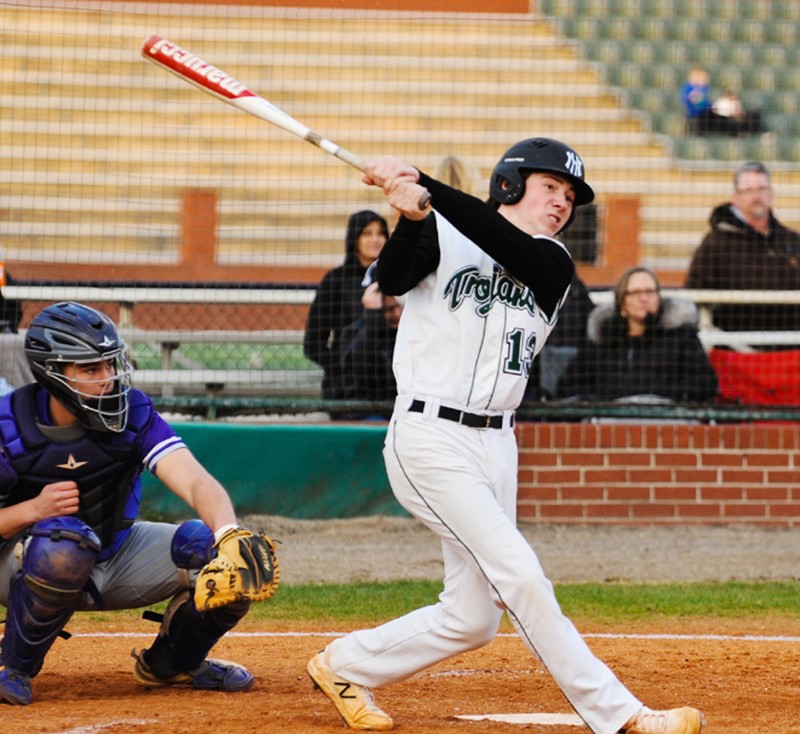 The Trojans (8-7, 7-1) held Cherokee Bluff to just two hits in an 11-0 shutout win in five innings Wednesday night on the road. It was North Hall’s sixth win in a row and the last seven out of eight.

It was also the Trojans second straight shutout against the Bears this week.

The Trojans remain in second place in the Region 7-3A standings, one game behind Fannin County.

North Hall took advantage of some Bluff miscues in the second inning, scoring one of the three runs off an error, Tate Brooks was hit by a pitch from Dylan Kautz, which scored Tyler Brooks and Caleb Clark singled to score Caleb Payne.

The Trojans added another run in the third off an error, going up 4-0.

In the fourth, Jackson Dyer doubled scoring Clark and David Seavey. Later in the inning, Caleb Wiley scored off after Payne was hit by a Chandler Shope pitch. A batter later, Dyer walked home. The Trojans finished the inning with a single by Tate Brooks, which scored Tyler Brooks and a Clark double that scored Payne and Wes Tadman to go up 11-0.

Dyer finished the day 4-for-4 at the plate with two RBI and Clark was 2-for-4 with three RBI. Tate Brooks drove home two runs and Payne, Wiley and Kelton Kieschnick had one RBI each.

Kieschnick earned the win on the mound, giving up two hits and striking out one in four innings of work. Jack Wiley picked one hitless inning while striking out two.

Phillip Lemay’s walk-off single in the bottom of the 10th inning sent C Carter across the plate and broke the three-game skid for the War Eagles Wednesday night against White County at home.

The win evened the series with White County, 1-1, this week.

The Warriors jumped out to a 1-0 lead in the second inning, but the War Eagles answered in the court inning off a Benson Miller double that scored Christian Charles.

White County pulled back ahead, 2-1, in the fifth off an Evan Chambers single that scored Jared Johnson.

In the bottom of the fifth, the War Eagles hammered back, this time off a ground from Atticus Tomcho that scored Charles, tying the game 2-2.

Over the next five innings, the two region foes traded scoreless innings until the War Eagles broke through in the 10th.

Miller also was 2-for-3 with one RBI.

Both Chambers and Riley Higgins were 1-for-4 with one RBI.

TJ Smith pitched a complete game to lead the Vikings past Lumpkin County in the Region 7-3A bout Wednesday afternoon.

Smith allowed four hits and no runs and five strikeouts in seven innings.

Matt Lacey and Luke England each drove in a run.

The Falcons exploded for nine runs in the seventh inning to breeze past West Hall Wednesday on the road.

Flowery Branch took the lead in the top of the second inning, 2-0, but West Hall fired back in the fourth and roared to the lead, 3-2 after four innings.

The two teams traded outs over the next two innings until the Falcons went off in the ninth.

Anthony Woeltje was part of the massive seventh inning, belting a two-run home run in the innings. He finished the day 2-for-4 with four RBI.

Connor Larson and Andrew Armstrong both drove home two runs and Zander Sechrist has one RBI.

Jake Beaver was 3-for-3 and scored two runs for the Falcons. Beaver also pitched up the win on the hill, pitching two hitless innings and striking out two.

West Hall’s Kyle Murphy was 2-for-3 at the plate with one RBI. Nick Sturm also drove in a run.