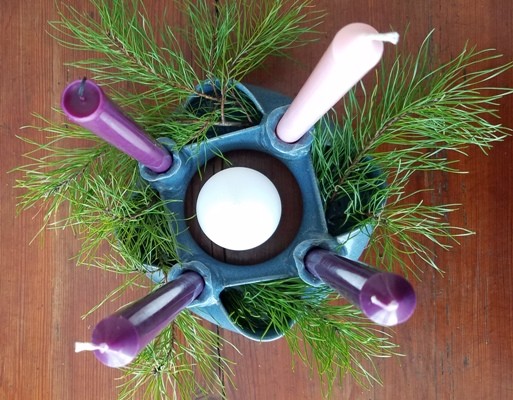 Growing up meant celebrating not only Christmas, but Advent, also. The word advent means the arrival or coming of something or someone monumental. In the context of Christmas, the season of Advent is December 1 through 24.  Think of it as a countdown to Christmas because that’s what it is.  Strictly speaking, Christmas doesn’t begin until December 25 and runs until January 6. Those are the twelve days of Christmas we always sing about.

One of the ways our family celebrates Advent to this day is with the Advent wreath. It features four candles in a wreath surrounding white candle. You begin four Sundays from Christmas lighting one candle during the first week and adding an additional one each week until Christmas arrives. Then you light them all including the white candle. As kids, we always sang “Happy Birthday” to Jesus after lighting them on Christmas Day.

Since letting children play with fire isn’t the best idea, we also had an Advent calendar. It was usually made of heavy stock paper with a picture on the front. The numbers one through 24 were scattered about the picture. Each one was a little window you could open to reveal a picture or symbol representing part of the Christmas story. They were always fun, and we looked forward to opening a window each day until Christmas.

Over the years there were also calendars that were of heavy cloth sporting little pockets that held tiny gifts. Those were not only good fun, but also great practices for the rip-and-tear festivities of Christmas Day.  When I felt the need to write about Advent, I thought it would be fun to come with some more humorous ways to count down to the big day. A quick internet search revealed that, as usual, real life is funnier than anything I can devise.

Let me share some of the highlights for those who are looking to add a little something extra to Advent. However, I’m only going to share the ideas and not the actual company or product names since those folks are putting in coins in my stocking.

For the tea lovers, there’s a calendar featuring a different tea for every day. Well, almost every day. The blurb says you’ll receive 22 different teas to count down the days. Yeah, if you start two days late. Apparently, their calendar is for people unable to sustain 24 days of patience.

Christmas is filled with wonderful music and Advent should be, too. Welcome the arrival of technology to the world of Advent calendars. They make one with the traditional twenty-four windows, but behind each one is a button. Press the button and you’ll hear a 40-second jazzy version of a familiar Christmas tune. I am thinking these are likely traditional carols and not pop tunes. Something about including “Grandma Got Run Over by a Reindeer” in an Advent calendar just doesn’t seem right.

I know I said I wasn’t going to give company names, but it would be a waste of words to talk around LEGO when it would be obvious that’s what I’m referencing. So yes, Virginia, there is a LEGO Advent calendar. It comes with a variety of figures and quite a few different vehicles, including a snowplow, a sleigh and a snowmobile, because how else are you going to be able to get to the manger? With 234 pieces total and only 24 days to lose them, I hope your children are up to the challenge.

There’s one that offers a piece of chocolate every day. The chocolate comes in different seasonal shapes including Santa, because biting the head off a jolly old elf is quite festive. I never had one of these and don’t really want one. Those who know me might think this an odd statement since I am a major chocolate freak. And that is the exact reason why I don’t want one. Instead of a 24-day countdown, mine would be about 24 minutes.

If it’s meat you want, it’s meat you’ll have with the Jerky Advent calendar. It features 24 one-half-ounce jerky treats. There’s beef, boar, buffalo, elk, gator and venison. This is a tip of the ball cap to the fourth wiseman. You never read about him because his gift was gator jerky. While it might be tasty, it isn’t very Biblical. Alas, poor King Bubba, so misunderstood.

Which brings me to the Beer Advent calendar. It features 24 different regional beers. The region depends on which brand you choose. The one I saw features those from Bavaria, but I’m sure you can find them for brews crafted in the United States, too. I would think it would make the perfect complement to the aforementioned jerky calendar.

Even though we were excited to open a new window each day, as kids we would sometimes forget and would have to open several on one day. I wouldn’t recommend that with the beer calendar. Realizing it is December 24 and trying to finish your beer calendar after falling 10 days behind will have you singing a different tune when December 25 arrives.

“On the first day of Christmas my true love gave to me one massive hangover!”

Tra-la-la-la-la and have a great Advent. Remember, no underage counting down. Never drive and countdown. Always countdown responsibly. Never countdown when pregnant or nursing.