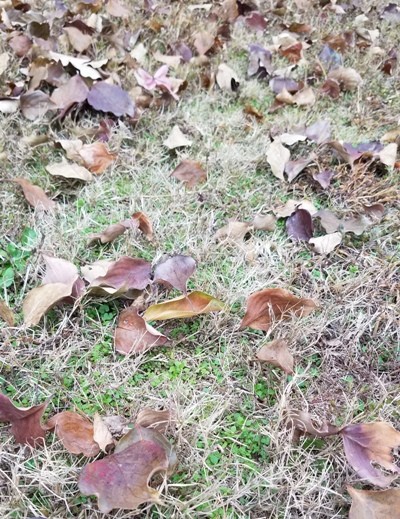 And now the truth about raking leaves.

Raking leaves is merely the illusion of being productive. As soon as you finish, you have to start again.  I maintain that such an activity should only happen once. For several years I tried to live the example.

My father-in-law (a.k.a Chickenman from Murrayville) used to have a Bill Goat. It's capitalized here because I'm referring to a brand of parking lot vacuum which is also handy for sucking leaves off your lawn and, if you’re not careful, topsoil and small dogs too.  I used for several years, but only after every leaf had abandoned ship. The lawn looked great, or as great as crabgrass can look. Best of all, I only had to do it once.

That's not to say my wife was happy with my plan. I called it efficient. She called it lazy. So after a few years of this I went back to the old ways and did it several times in the season.  It's nothing but pseudo productivity. You only think you're accomplishing something. Truth is every time prior to the last time is just practice. I'm not perfect at anything, but I don't think I need practice when it comes to raking leaves. It’s not complicated and doesn’t come with an instruction sheet. Even if it did, I’d ignore it.

Raking is really the wrong term to use these days. A stick with metal fingers? Really? But that's all we had when I was growing up and growing tired of raking leaves.  Now we strap a combustion engine on our backs and play human hurricane in order to herd those little leaf doggies off our lawns. It's always nice to have a handy tool to help me get nothing done as quickly as possible and go deaf in the process. Granted, as a guy I don’t really mind using motorized equipment, but I’d much rather be strapping on a jet pack instead.

The problem is that the concept of having a lawn came long before other, more desirable pastimes. What most don't realize is had television, the internet and all other forms of digital distraction been developed a hundred years earlier, raking leaves would not have become a part of our modern culture in the same way it is today.   The idea of having a lawn and maintaining it came up as a way to fill time before cable and streaming.  I maintain had those things would have come sooner, we'd only blow leaves when it really counts: after the last one hit the ground. And then it would likely be a big holiday with lots of sales leading up to it for blowers, baggers and rakes. Perhaps it would be called “Raking Day” or “Leaf Herding Day”.

Greeting cards would surely be part of the scene too.

“Happy Leaf Herding Day. May your rake never ‘leaf’ you.”

And something for the purists who are anti blower.

Perhaps we could hang little mulch bags in the tool shed for St. Leafy to leave a little something for us like a new pair of gloves or hearing protection.

I think would actually enjoy that much more than the way things are done today. Although I don’t think there would be many who would say “I wish it could be Leaf Day every day” like they do about Christmas.

Also doing it only one day each year would give us more time to buy pine straw and other mulch to spread on our yards. It’s what we need to do it after taking all that free leaf mulch and pushing it into the gutter for the city to take away to rot elsewhere.

Bill Maine Executive Vice President & General Manager
Bill Maine oversees all operations at Jacobs Media and hosts "Morning Edition with Bill Maine," weekdays 5:30-9 a.m. When not on the radio, you'll find him water skiing on Lanier, running, or smoking ribs on his Green Egg. Bill has been a part of Jacobs Media since 1980. Bill is addicted to peanut M&M's with no desire to reform. Email: bill.maine@jacobsmedia.net. Twitter: @BillMaine
More Articles From Bill »
© Copyright 2020 AccessWDUN.com
All rights reserved. This material may not be published, broadcast, rewritten, or redistributed without permission.