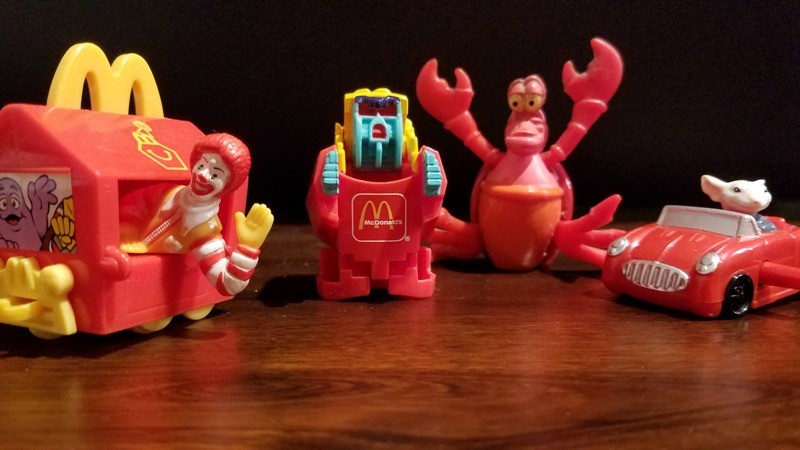 I’ve commented before that the cereal aisle was the toy department of the grocery store. I also asked why you needed to put prizes in boxes of sugarcoated cereal to entice kids to beg their parents to buy them. The fact that the stuff was sugarcoated was enough.

So, as we mark the 40th anniversary of the McDonald’s Happy Meal, a similar question comes to mind.

The Happy Meal concept didn’t come along until I had slipped past the age for such a delightful repass. However, it wouldn’t have made a difference; we didn’t have a fast food joint on every corner like you see today. They weren’t in malls or convenience stores. They didn’t have apps or playgrounds. And they didn’t have toys with their meals. Yes, those were indeed dark times.

We also didn’t eat out as much then. When we did, it was a big deal. We didn’t have to be lured in by toys as a side dish to our meal.

“A hamburger and fries? Why, yes, father, I wouldest enjoy such succulent fare. Brother! Come let us put aside our squabbles, for tonight we feast!”

I recall one evening when my folks were having a shindig at the house but needed me out of sight and out of mind. By this time, my brother was old enough to drive and had a job, so he wasn’t a concern.  Before being relegated to the basement rec room to watch television for the evening (a treat itself for a boy of eight), Dad took me to Hardee’s to pick up a burger, fries, and the ultimate American beverage—a milk shake! (cue angelic music) This was such a big deal; I felt like the Prodigal son when his father ordered his robes and ring placed on him and had the fatted calf killed.

That’s why I was so excited when our children arrived. Now I had an excuse to buy Happy Meals without fear of ridicule or having the person behind the counter ask, “Aren’t you a little old for this?” That’s the tween version of being carded.

Thus, began my collection of fast food kid’s meal toys. Most are from McDonald’s, but not all. I say “kid’s meal” to be inclusive of the toys from Wendy’s and Burger King that also reside in the shoebox that is the museum to my collection. After all, a Happy Meal by any other name is a kid’s meal.

My favorites include Stuart Little in his convertible. You can wind it up and he’ll ride around in a polite circle, so you don’t have to worry about losing him. There’s Sabastian, the crab from Disney’s “Little Mermaid.” Wind him up and he dances sideways.

I also have Ronald McDonald riding in a car that looks like a Happy Meal box. He’s leaning out the window and waving. There were several others, all with different McDonald’s Land characters. They were made to hook together, forming a rolling “Ya’ll come back again” choo-choo train. Quite the commercial coup. I had several of the other cars, but small children don’t always keep up with their toys. I just can’t have nice things.

One of the cooler and more creative occupants of the shoebox is a small container of McDonald’s fries. But wait, it’s not really an order of fries. A little maneuvering turns it into one of the Transformer robots, which wouldn’t be as cool if it happened in real life.

Although I certainly have enjoyed this toy-in-a-meal thing, it still puzzles me why they call it a “Happy Meal.”  Any kid will tell you, they’re happy enough to get a burger and fries. They should call the ones with toys “Happier Meals.”

It’s the same thing with “fun size” candy bars. How is making a candy bar smaller fun? Shouldn’t the fun size be two feet, instead of two inches, long? It’s more accurate to call them “disappointing size” candy bars. They also have the “mini’s” that are even smaller. Mini’s? More like insulting.

While we’re on the subject, I think we have this prize-in-a-meal thing backwards. I think you could sell a ton of other products if they came with free hot, salty, fresh-from-the-grease fries.

I don’t really want a colonoscopy. Wait, it comes with fries? Dude sign me up!