(VIDEO) Fitzgerald runs Rabun County out of 2A playoffs 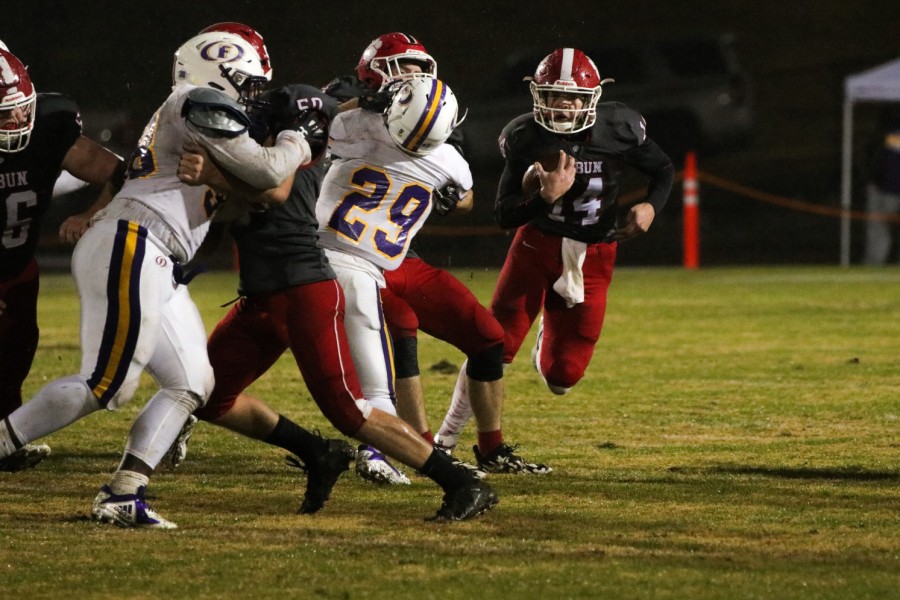 Rabun County freshman quarterback Gunner Stockton(14) tries to pick up some yardage against the Fitzgerald defense Friday in the Wildcats' 28-17 loss in the Class 2A playoffs.
Photo: Seth Chapman

State Quarterfinal Highlights: Rabun vs Fitzgerald from AccessWDUN on Vimeo.

TIGER — Rabun County seemed to have all the intangibles Friday night in its Class 2A quarterfinal showdown with Fitzgerald.

A preferred home game. Familiar November north Georgia weather (cold and rainy). And, the classification’s best offense and a defense that had yet to yield a single point in the 2018 playoffs.

Fitzgerald either didn’t get the memo or just flat-out ignored it.

The Purple Hurricanes went old, old school on the Wildcats pulling out a single-wing, power rushing attack that was no match for the Rabun County defense, piling up 379 yards on the ground in a surprising 28-17 win at Frank Snyder Stadium.

“We were missing one of our key linebackers but really we just had trouble lining up defensively, especially early on. They just outplayed us,” Rabun County coach Lee Shaw said.

Offensively, it was the Wildcats (11-2) lowest output since managing just 10 points in a loss to Bremen in the season opener. They came in averaging 48.4 points a game. They couldn’t get anything going against a Hurricanes defense that was ranked 23rd in Class 2A.

Freshman quarterback Gunner Stockton, who had a phenomenal freshman campaign with over 2,700 yards passing coming into Friday night, struggled early. He was just 1 for 6 for 2 yards over the first three drives while the ground game behind Brison Beck was held to just 14 yards on 6 carries.

"We had some drops and that didn't help but that's a good football team. The weather wasn't that much of an issue. We just didn't execute the way we have been during the season" Shaw said.

Meanwhile, Fitzgerald (10-3) used its power run game to churn out 133 yards on its first two drives, capped by a 23-yard touchdown run from Ethan Gordon and then a 14-yard TD run from Justin Reliford in the first 9 minutes of the game for a 14-0 lead.

The Wildcats defense finally began to stand up to the Hurricanes bullying tactics forcing a punt and then stopping them on downs at the Fitzgerald 36 after stuffing runs on third and fourth down. On Rabun’s first play after the defensive stand, Stockton and Austin Jones connected for a 36-yard TD pass to cut lead to 14-6,  after a botched PAT, early in the second quarter.

But after trading punts, Fitzgerald got going again converting a 3rd-and-16 on a 16-yard QB draw by Reliford. A strange sequence of an on-again, off-again lightning delay helped the Hurricanes catch their breath as Gordon scored his second TD of the game on a 62-yard sprint around right end on the second play back with just 1:53 left in the half for a 21-6 lead.

The two teams’ traded punts to open the third quarter with the Wildcats gaining field position and moving to the Fitzgerald 23. But the drive stalled and Tito Diaz booted a 39-yard field goal to cut the lead to 21-9.

The Rabun defense again responded holding the Hurricanes to a 3-and-out on their next possession. Stockton and Austin Jones hooked up again for a 55-yard pass to the Fitzgerald 10 but again the drive stalled. This time, however, Diaz missed on a 28-yard field goal attempt with 3:11 left in the third quarter.

Quarterback Damien Devine then took over engineering an 80-yard drive and capping it with a 5-yard scoring run to push the lead to 28-9 with 11:53 left in the game.

Devine finished with 132 yards on 25 carries and Gordon added 91 yards and two scores on just 4 carries for Fitzgerald. Kody Krause had 62 yards for the Hurricanes.

After trading punts again, Rabun got its final score on a 2-yard Stockton touchdown run after he and Braxton Hicks connected for a 32-yard pass to the Hurricanes 2. Austin Jones added a 2-point run to close within 28-17 with 5:43 left.

Stockton finished the game 9 for 25 for 180 yards and the one TD pass. But the rushing attack, which came in averaging 216 yards a game, managed just 17 yards on 18 carries, which included three sacks of Stockton.

Rabun would not touch the ball again as Fitzgerald ran out the clock on the final possession of the game.

“We had a great year really,” Shaw said. “We played a lot of young guys and we’re in good shape for the future. But it’s disappointing to end it this way for the seniors.”