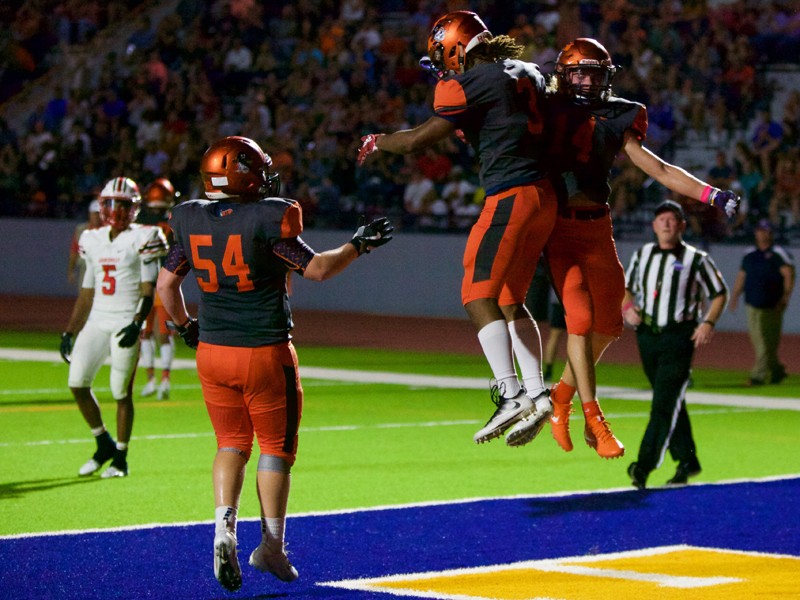 MT. AIRY — Habersham Central rolled into Friday’s Region 8-6A matchup against Gainesville with a chip on its collective shoulder that Gainesville could not dislodge.

Luttrell threw two first half touchdowns that sparked the Habersham offense and matched that intensity in the second half with two more scoring tosses, finishing 13 of 22 for 186 yards through the air while adding 31 rushing yards on nine carries.

Raiders running back Tracey Lowery also proved a key piece, getting the offense going to start the game and delivering the game’s final score. Lowery scored on the ground in each of the first two quarters, putting the Raiders up 14-3 with 6:44 left in the first half. Lowery then provided the knockout blow to Gainesville, breaking off a 43-yard run with 4:48 left in the game. Lowery ended up with 184 yards on 16 carries and three touchdowns.

It was not all Habersham, however, and Gainesville found plenty of offensive traction in the fourth quarter to attempt a comeback.

Trailing 42-17 at the start of the final quarter sophomore quarterback Gionni Williams and junior running back Dez Brown helped Gainesville cut the Habersham lead to 10 with 7:04 remaining on touchdown plays within a 2:06 span.

Despite the effort, the Raiders (4-3, 1-1 8-6A) held firm for the victory, which keeps Habersham in the mix for its first playoff berth since 2011.

The Red Elephants (0-7, 0-2) got 79 yards passing and one interception from Williams, but the signal caller did most of his damage on the ground, rushing 25 times for 193 yards and two touchdowns. Brown also rolled up 90 yards on 13 carries and added two more touchdowns.

The Raiders have a bye next week, then face two-time defending region champ Dacula on Oct. 19 in Mt. Airy.

Gainesville will also have a bye next week before continuing its region campaign against Winder-Barrow at City Park.