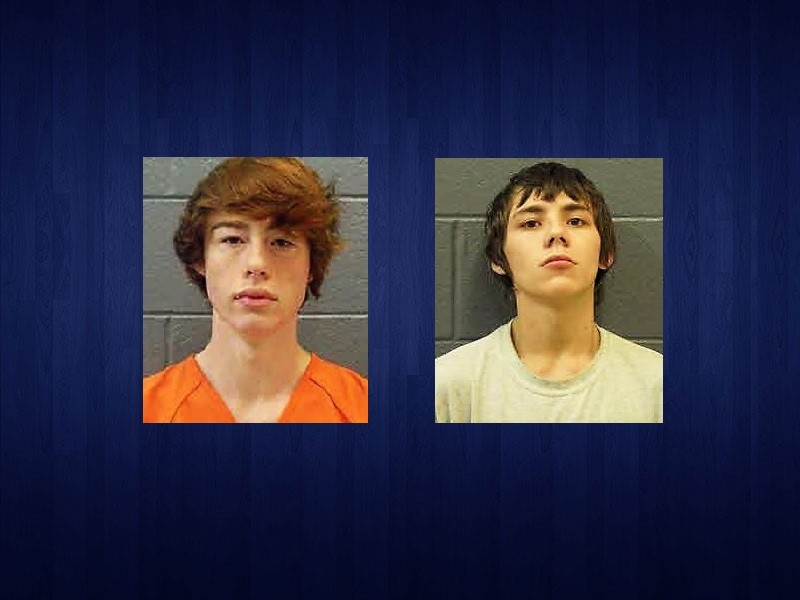 Wade Stewart Bolton, left, and Louis Edward Stiles are two of the three men facing charges in the burglary at Chimney Oaks Golf Club in Homer. No booking photo is available yet for Adrian Scranton.
Contact Editor

HOMER — Banks County officials say they have arrested three men and recovered about $55,000 worth of property stolen from Chimney Oaks Golf Club in Homer Sunday night.

That’s about 90 percent of the estimated $61,850 worth of lawn equipment, electronics, gasoline and other items discovered stolen from inside a building and reported to Banks County deputies Monday morning.

Two of the men were arrested at a home on Carson Segars Road on Monday, with the third arrested on Ga. 98 Monday night.

McFaddin said a deputy who was on patrol in the area of Grove Level Road on Monday observed an older blue Jeep Cherokee traveling in a reckless manner and at a high rate of speed in the opposite direction.

The deputy located the vehicle in a driveway on Carson Segars Road and found it to be occupied by several occupants, with a male standing outside. When the deputy got out, the male fled on foot, but four other people stayed inside the vehicle.

“While speaking with all the occupants, items that were observed from plain sight inside the vehicle were noticeably identifiable,” McFaddin said. “After further investigation, deputies were able to determine the equipment observed from within the vehicle was actually stolen from Chimney Oaks Golf Club on the previous evening. Additional items were located at the residence that also were confirmed to be linked to Chimney Oaks Golf Club.”

Deputies on Monday recovered most of what had been reported missing by course officials earlier.

“We can confirm that we have located 90 percent of the reported stolen items,” McFaddin said. “We are still investigating leads to locate the final item that was stolen from the local business.”

Bolton and Scranton were arrested at the residence. Stiles was identified and arrested Monday night on Ga. 98.

Two females in the Jeep were detained and interviewed, then released, according to McFaddin.