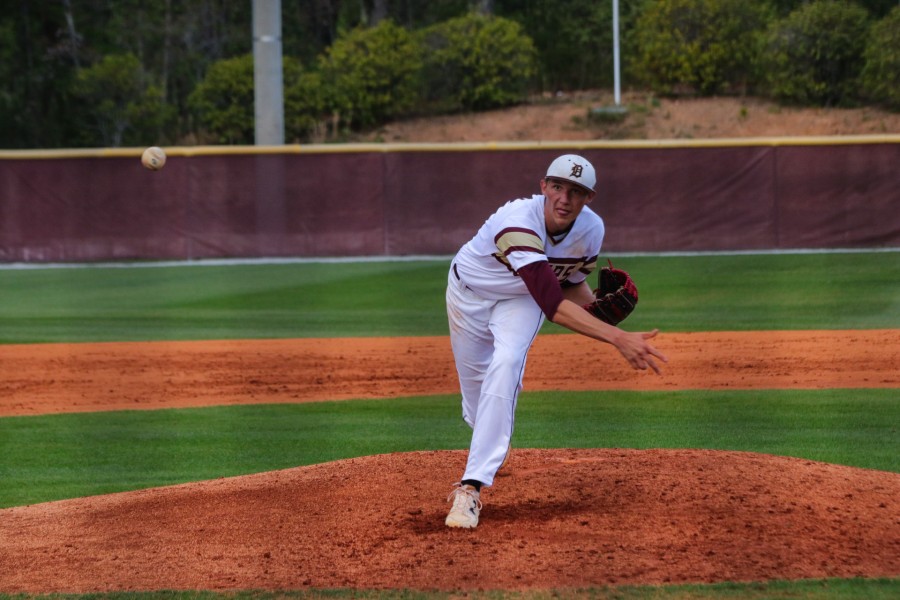 Dawson County's Noah Davis did not get a decision but kept the Tigers in the game long enough for them to rally past North Hall Monday night a in a huge Region 7-AAA victory.
photo: Seth Chapman
Contact Editor

DAWSONVILLE — Dawson County scored three runs in the sixth to tie the game and then got a game-winning RBI hit from Luke Martin in the seventh to complete an improbable rally and beat North Hall 6-5 in a crucial Region 7-AAA victory Monday night.

The win for the Tigers (19-7, 13-3 Region 7-AAA) was their fifth straight overall and 11th straight in region play. The loss could prove critical for North Hall (18-9, 11-5), which dropped two games behind Dawson County in the race for second place in 7-AAA (Greater Atlanta Christian sits in first place in 7-AAA, one-half game in front of the Tigers).

Dawson County broke a scoreless tie with a pair of runs in the third for a 2-0 lead. North Hall answered back in the top of the fourth with three runs to take a 3-2 advantage. The Trojans added two more runs in the sixth for a 5-2 advantage but could not maintain it.

The Tigers answered with three in the bottom of the inning to tie the game setting up the finish.

Reese Olson pitched well for North Hall, going 6 innings and scattering nine hits. He gave up five runs but only two were earned. After a rain delay Corban Meeler took over for the Trojans in the seventh but could not record an out, walking two and giving up the hit to Martin to take the loss.

Easton Wright got the win for Dawson County pitching 1 1/3 innings in relief, striking out two and not allowing a hit or a walk.

The two teams play the second of the crucial three-game series on Wednesday at North Hall before each wraps the season on Friday in Game 3 back at Dawson County.