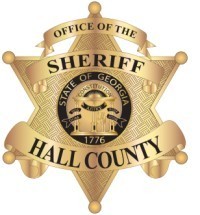 Kevin Head had served as Deputy Chief of the Hall County Probation Service Department. He becomes Couch's Major of the Administrative Bureau in charge of courthouse and jail operations.

John Latty, retired as Assistant Chief of the Gwinnett County Police, becomes the Major of the Enforcement Bureau in charge of uniform patrol and criminal investigations.

"Both men I have known for my entire career, and I consider them to be among the finest public safety professionals that I've ever worked with," Sheriff-elect Couch said.

"They will help to ensure a bright future for the sheriff's office and the citizens that we serve."

The Couch administration decided to reduce the number of executive staff positions from four to two.

"This is all about getting more officers out in the field and better trained and equipped to serve the citizens of Hall County," Couch said.

The contracts of two of four of current Sheriff Steve Cronic's executive staff were not renewed. They are Majors Woodrow Tripp and Robin Kemp.

"These moves were not disciplinary in nature, they are simply part of Sheriff Couch's desire to move the department forward with a new vision. Their years of professional service to this community are appreciated and we wish them well in their future endeavors," a statement from sheriff-elect Couch's office read.

Colonel Tony Carter, a third member of Cronic's executive staff, is scheduled to retire at the end of January. A fourth executive slot was empty.

The swearing in ceremony for Sheriff Gerald Couch is scheduled Friday at 3:00 p.m. from First Baptist Church on Green Street in Gainesville. Governor Nathan Deal will conduct the ceremony.

Head graduated from North Georgia College with a bachelor's degree in Criminal Justice. He began his law enforcement career in 1987 as a patrol officer with the Hall County Sheriff's Office. During his time with the department, Head also served as a criminal investigator, sergeant of the Crimes against Children Unit, lieutenant over the Crimes against Persons Unit, Assistant Commander of Criminal Investigations and the supervisor of the Safe Streets Task Force, among other leadership positions. In May 2012, Head left the sheriff's office to serve as Deputy Chief of the new Hall County Probation Services Department.

Latty retired as assistant chief of the Gwinnett County Police Department after 25 years of service. He completed the Georgia Law Enforcement Command College in 1998 and served as an adjunct professor and lecturer for Columbus State University in the Georgia Law Enforcement Command College for 12 years. Latty also served as a U.S. Army military policeman for three years. He is a lifelong resident of Hall County and a 1970 graduate of South Hall High School. He is also a graduate of Gainesville Junior College, North Georgia College and Columbus State University, where he received his master's degree in public administration. Latty and his wife of 40 years, Rebecca, have three children and five grandchildren.