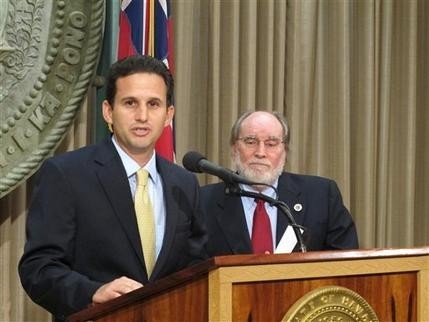 The 40-year-old Schatz, a former state representative and onetime chairman of the state Democratic party, said his top priorities would be addressing global climate change, preserving federal funds used in Hawaii for things like defense spending and transportation, and getting federal recognition for Native Hawaiians for forming their own government, similar to many Indian tribes.

Schatz, who ran with Abercrombie for the state's top two offices in 2010, beat out Hanabusa and Esther Kiaaina, a deputy director in the state Department of Land and Natural Resources.

The three candidates were selected by state Democrats Wednesday morning from a field of 14. The candidates briefly made their cases before the state party's central committee.

"No one can fill Sen. Daniel K. Inouye's shoes, but what we want to do today is find the right person to walk in his footsteps," Schatz told the committee.

"I want to be your senator because I believe Hawaii needs seniority, and we need someone who can build it up over decades and decades. And I pledge to you, if I'm given this opportunity and obligation to serve, I will try to make this my life's work and rebuild the tenure that Hawaii so desperately needs," he said.

The White House said Schatz would fly to Washington Wednesday night with Obama, who was returning from his Hawaii Christmas vacation early as Congress considers what to do about the so-called fiscal cliff.

Schatz could be sworn in as early as Thursday, which would make him Hawaii's senior senator. Hawaii's other senator, Daniel Akaka, is retiring at the end of this Congress after 22 years.

Even before winning the 2010 general election, Abercrombie expressed faith in Schatz, saying he would put him in charge of attracting more private and federal investment in Hawaii. Other responsibilities included leading the state's clean energy efforts and Asia-Pacific relations.

"To the people of Hawaii, I can assure you this: I will give every fiber of my being to doing a good job for the state of Hawaii," Schatz told a news conference in Honolulu. "We have a long and perhaps difficult road ahead of us, but we can succeed if we work together. I understand the magnitude of this obligation and this honor, and I won't let you down."

Inouye, by far Hawaii's most influential politician and one of the most respected lawmakers in Washington after serving five decades in the Senate, died last week of respiratory complications at the age of 88. He sent Abercrombie a hand-signed letter dated the day he died, saying he would like Hanabusa to succeed him, calling it his "last wish."

Four days after eulogizing Inouye in the courtyard of the Hawaii Capitol, Abercrombie said he had to consider more than just Inouye's wishes in filling his seat.

"Of course Sen. Inouye's views and his wishes were taken into account fully, but the charge of the central committee, and by extension then myself as governor, was to act in the best interests of the party ... the state and the nation," Abercrombie said.

"The law makes explicitly clear, as do the rules of the Democratic Party, that while everyone's voice is heard and everyone's view is taken into account, nonetheless, no one and nothing is preordained."

Under state law, the successor had to come from the same party as the prior incumbent. An Abercrombie spokeswoman said the governor did not feel any political pressure from within his party to make the choice he made.

"While we are very disappointed that it was not honored, it was the governor's decision to make," Jennifer Sabas, Inouye's chief of staff, said in a statement. "We wish Brian Schatz the best of luck."

Selecting Hanabusa, 61, would have required a special election in Hawaii's 1st Congressional District. Last time that happened, Hanabusa lost to Republican Charles Djou because of a winner-take-all format that split votes between Democrats.

Abercrombie said the possibility of a special election was a factor, as well as Hanabusa's "key position" on the House Armed Services Committee. The governor said she was on her way toward establishing a senior position on that panel, and it's important for Hawaii - with its four-member delegation - to establish seniority in both chambers.

Schatz will serve until an election is held in 2014. He said he will run for re-election to try to keep the Senate seat until 2016 - the end of Inouye's original term - and would run again for Senate in 2016 if given the chance.

Hanabusa congratulated Schatz in a statement.

"Having served as chair of the Hawaii Senate Judiciary Committee when the succession law was passed, I fully respect the process and the governor's right to appoint a successor," she said.

Last week, when Abercrombie announced he would not seek the seat himself, his spokeswoman Louise Kim McCoy said Abercrombie intends to make his current post as Hawaii governor the last office of his political career.

Inouye would be "very happy" with the choice, Hawaii Democratic Party chairman Dante Carpenter said. Schatz has less experience than some older politicians in the Senate but he will be building seniority, which is "critical" to the state of Hawaii, he said.

"In the words of Sen. Dan Inouye - invoked more than once - seniority in the United States Congress is everything," Carpenter said.

Senate Majority Leader Harry Reid had urged Abercrombie to name Inouye's successor before the end of the year. The next Congress begins Jan. 3.

First in line to replace Schatz as lieutenant governor is Senate President Shan Tsutsui, who said he planned to discuss the prospect with his family before deciding.
© Copyright 2022 AccessWDUN.com
All rights reserved. This material may not be published, broadcast, rewritten, or redistributed without permission.

NY Gov. Cuomo acknowledges behavior seen as 'flirtation'
New York Gov_ Andrew Cuomo has acknowledged for the first time that some of his behavior with women “may have been insensitive or too personal."
By The Associated Press