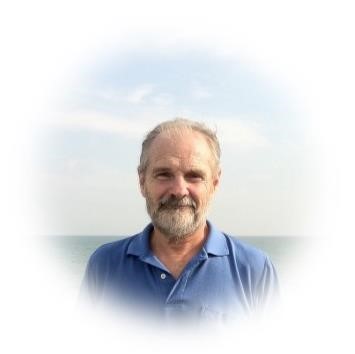 Jim Stebel was a happy man and he had a wonderful life. His family and friends wish he had lived a lot longer than the 72 years he was given. They were all blessed to have known him.  He died at home, in his own bed, after a relatively short illness.

Jim was an Ohio native but lived and worked in Iowa, Texas, and Georgia after his first work-related move out of state.

He had a typical middleclass upbringing and was a child when you could really enjoy that magical time – no seat belts, no bike helmets and summer vacations that were a full three months long.  Days began with cereal at the table with his family and then involved friends, swimming pools, bicycles, baseball and instructions from parents to “be home in time for dinner.”

His family moved from Luckey to Perrysburg when he was in the 4th grade. At Perrysburg High School he met Joan Karstaedt, the love of his life, who became his wife of 50 years. In high school he was an athlete and musician. He played football, baseball and wrestled. He played trumpet in the band and orchestra.

He attended Purdue University and received his Bachelor of Business Administration degree from Ohio University. His MBA was obtained from the University of Toledo. He began his business career with Libbey Owens Ford Glass Company in Rossford, Ohio and rose to the position of plant manager for their Mason City, Iowa and Sherman, TX plants.

Jim and Joan moved to GA in 1990 where for a short time he owned his own automotive maintenance shop. He also started Stebel Enterprises which allowed him to do the home remodeling work he really loved. He was able to use his amazing talents to create decks, kitchens, bathrooms, screened in porches, garden sheds and various other home improvements for his clients, most of whom considered him a friend more than a handyman. He was truly happy solving problems and making others happy by improving their lives in any way he could.

In his “spare time” he loved nothing better than being outside, working in the yard and building landscape projects. Every home he and his family have lived in has beautiful landscapes created by Jim. He also loved the water and the beach. He was fortunate enough to have owned a beach house and memories of family vacations to NC are among our favorites, as well as “Tybee trips” where everyone got together and had a wonderful time. “The Bapa Monster Olympics” that took place in our daughter’s pool are now legendary in Texas !

He and Joan had two beautiful daughters, Tiffany (Wilson) and Tawny(Wright), who blessed them with nine wonderful grandchildren: Amanda (Stebel), Samantha (Wright), Brooke (Wilson), Jamie (Wright), Brynne (Wilson), Gunnar (Wright), Reed (Wilson), Reilly (Wilson) and Brett (Wilson). They also have a great grandson, Aiden Stebel. Aiden has benefited from having Jim to take him to Home Depot build days, Cub Scout meetings and to give him an appreciation for the outdoors and building in general. The playhouse in the Stebel backyard is one of Jim’s labors of love for the grandkids. He was, lucky us, the best husband, father, grandfather and great grandfather anyone could ever hope for!

When he was diagnosed with leukemia he told his wife “I have no regrets. I’ve had a wonderful life and if this is it, then it is what it is.”  He fought the disease with his typical athlete’s mentality while maintaining his optimistic spirit and loving temperament but succumbed to complications from the chemotherapy. He was a special man. He was well loved and will be missed by many every day.

A visitation will be held from 2:00 p.m. - 4:00 p.m. on Saturday, August 18, 2018 at Memorial Park Funeral Home Braselton. His family asks that any donations to honor him be made to the Leukemia and Lymphoma Society.

Send online condolences to www.memorialparkfuneralhomes.com and also at tributes.com.