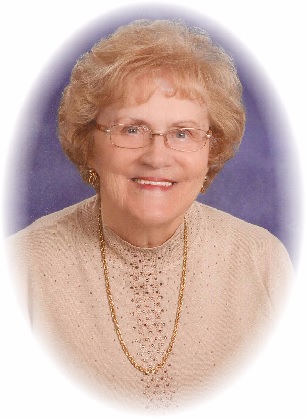 Joan ‘Jo’ Jones Burleson, age 86 of Gainesville, Georgia, passed away peacefully on Thursday, October 26, 2017. She was born to the late John E. and Ruth M. Jones on March 25, 1931 in Asheville, North Carolina. Joan graduated from Lee. H. Edwards High School in 1949 and attended Brenau College until 1951 where she was a member of the Phi Mu Sorority.

Joan enjoyed most of her living and working years in Asheville including seven years as a service representative with the Southern Bell Telephone and Telegraph Company and fourteen years with Mission Hospital in roles including recruiting, selection and compensation. Before retirement, she obtained her real estate license and worked for Better Homes and Gardens Real Estate for twelve years.

After retirement, Joan and her husband Laurence moved to Land Harbor in Linville, North Carolina where they thoroughly enjoyed their time in the mountains.  They passed the time playing cards with friends and family and enjoying a roaring fire on the often cold mountain days.

Her final days were spent near her family in Gainesville.  She was a member of St. Paul United Methodist Church participating in the Lend-A-Hand Sunday school class and being active in the Flow Group.

Joan is survived by her son, Robert L. Fowler Jr. and his wife Leslie of Gainesville and her daughter, Robin F. Willis and her husband Jerry of Dunwoody. She leaves five grandchildren, Robert L. Fowler III of New York, Brett Eugene Fowler of Gainesville, Jennifer Willis Doty of Acworth, Amberlee Nicole Willis of Canton and Russell Burleson of Asheville; six great-grandchildren; a loving sister, Gladys J. Jones of Hickory, North Carolina, a niece, several nephews and a host of friends.

Joan’s husband Laurence A. Burleson preceded her in death.

The family would like to thank the staff at Lanier Lodge for their compassionate care.  The family is also grateful to Anslee Wilson of A Helping Hand Home Care and Jackie Pifer, her caregiver, for their dedication to Joan’s care and comfort.

Joan requested a private memorial service for immediate family. In lieu of flowers, the family asks that you consider a donation to A Time To Build (www.attb.org); a non-profit organization founded by her daughter and son-in-law or Eagle Ranch (www.eagleranch.org) of which her son is a board member.

Online condolences can be made at www.memorialparkfuneralhomes.com. Arrangements were provided by Memorial Park North Riverside Chapel, 989 Riverside Drive, Gainesville, Georgia 30501. 770-297-6200.