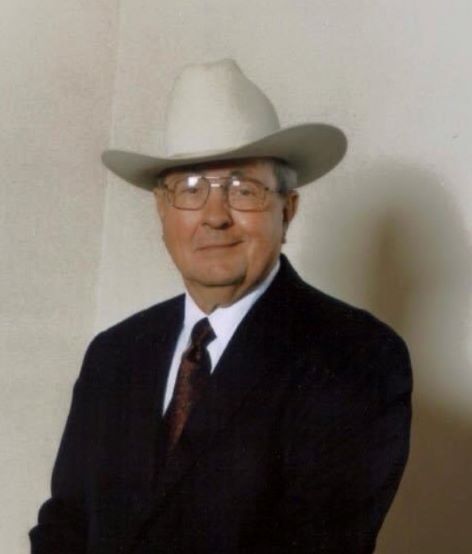 The Honorable Fred A Banks, age 86, of Hoschton, GA passed away on Thursday, September 15, 2022. He was preceded in death by parents, Rev. Odell and Mae Tullis Banks; sister, Joyce Banks Greenway and husband John Greenway; nephew, Steve Beard; brother, Rev. Cedric Banks and wife Dot Hawkins Banks; father-in-law and mother-in-law, Melvin and Leila Sloan Burel; brother-in-law, Cline Stancel. Mr. Banks is survived by his wife of sixty-eight years, Barbara Burel Banks of Hoschton; daughter and son-in-law, Renee Banks and Skip Seawell of Hoschton; son, Scott Banks of Conroe, TX; grandchildren, Ryan Seawell, Austin Seawell, Carson Seawell, Jessica Seawell; sister, Lucy Banks Stancel of Dacula, GA; and numerous nieces, nephews, and cousins.  Mr. Banks was born on March 20, 1936 in Auburn, GA. He attended the old Harmony School in Buford and graduated in 1954 from Sugar Hill High School.
Mr. Banks was a veteran of the U S Army, having served two years as a Classified Courier for the Department of Defense to the White House and the Senate in Washington, DC. Mr. Banks retired as President of Gwinnett County Fair Association after more than thirty-five years. He was a past member of the Gwinnett County Planning and Zoning Board.  He was the youngest Warden ever appointed by the State of Georgia and commissioned the first chapel at the Gwinnett County Prison for inmates to worship.  He was a member of the Peace Officers’ Association. After serving in the military, he worked as a Deputy Sheriff for Gwinnett County and later as an Investigator for the District Attorney’s office under Judge Reid Merritt.  He was a retired State Supervisor and Regional Director for Georgia Department of Corrections. He served on the Hi Hope Board in Lawrenceville.
Mr. Banks was a member and a Deacon of Duncan Creek Congregational Church in Buford. A hobby of his was going to cattle sales each week in Carnesville, GA, and working on his farm. After retirement, he also was a licensed auctioneer. Mr. Banks was a devoted husband, Daddy, and Papa to his family and will be greatly missed by all.
Funeral Home
Flanigan Funeral Home & Crematory
Phone
770-932-1133
Address
4400 S. Lee St, Buford 30518
Website
http://www.flaniganfuneralhome.com