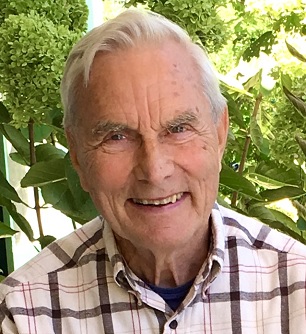 A memorial service and reception will be held at the Nacoochee Presbyterian Church in late fall as a joyful celebration of the life of Richard Eugene Tinius, loved by his family and friends as “Papa Dick.” Richard died on July 28th, 2022.

Richard was born on February 13th, 1934, in Des Moines, Iowa, to Judson Tinius and Mary Belle Tinius. The youngest of six children, he was preceded in death by his parents, three brothers, two sisters, and daughter, Jacquelyn Kaye Tinius.

Despite spending his earliest years in Des Moines, his true home was Sautee Nacoochee, where “Aunt Mary” and “Uncle Judd” ran the Starlight Camp for Boys and Girls every summer. It was there where he graduated from high school at what is now the Sautee Nacoochee Community Center; and it was nearby, at Truett McConnell College, that he met his lifelong spouse, Jimmie Ann Hutto, in 1951. They were married on October 24th, 1954.

Richard followed his brothers’ footsteps and joined the military in 1953 as a Naval Aviation Cadet at Pensacola, Florida. He graduated as a Second Lieutenant, and joined the Marine Corps as a helicopter pilot at Camp Lejeune, North Carolina. After a tour in Japan until 1957, he left the military to attend Georgia Tech.

After graduating in 1961 with a BA in Mechanical Engineering, Richard came to work with the National Aeronautics and Space Administration (NASA). In Huntsville, he worked on the Apollo program, Sky Lab, the Shuttle, the Space Lab, Space Habitat, Space Experiments, and the Space Station. By the end of his 33-year-long career, he was a proud member of the Senior Executive Service—the government’s top management level—and he not only retired as Chief Engineer of the Space Station, but was also twice awarded the Exceptional Service Medal by NASA. From start to finish, he was respected as a man who treated everyone with an open smile, open arms and open doors.

When Richard retired and returned home to Sautee Nacoochee with Jimmie in 1995, he continued to be loved as such a man. He rebuilt Starlight into the beautiful house it is today, and above all—with Jimmie at his side as matriarch of the Tinius-Hutto family—created a wonderful home. Over the years, he was very involved in the Sautee Nacoochee Community Center and Nacoochee Presbyterian Church. Family, friends, and visitors alike share fond and fun memories of river tubing, tree house shenanigans, rope swings, and celebrations, all thanks to “Papa Dick” and “Mama Jimmie.”

After a 15-year-long fight with Alzheimer’s disease, he passed away peacefully at Starlight, surrounded by family and holding Jimmie’s hand. He was a man who lived with his eyes on the skies—and in death, his spirit has gone home.

The family extends their love and gratitude to those who have been friends and supporters during his illness.

Barrett Funeral Home of Cleveland is in charge of the arrangements.