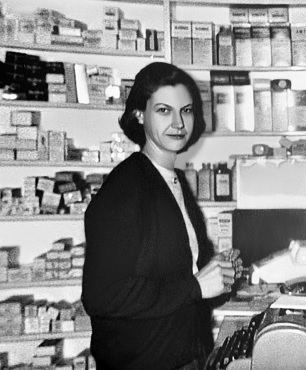 Mrs. Adams was born in on June 12, 1927, in Bulloch County, GA to the late Aljerine J. and Maggie Lou Allen Trapnell.  After graduating from Brooklet High School, she attended the University of Georgia where she was a member of Alpha Omicron Pi Sorority.  She graduated from the School of Pharmacy on her 20th birthday in the pouring rain.   She married Robert E. (Bob) Adams on September 21, 1947, while he was still attending the University of Georgia.  They moved to Gainesville, GA., in August of 1949 and opened Adams Transfer & Storage.  Jo Ann started work at Piedmont Drug Store in September of 1949 as the first female pharmacist in Gainesville, and retired from there in September of 1951.  In January of 1954, at the age of 26, she and Charlie Johnson opened Riverside Pharmacy from where she retired in July of 1986.

Jo Ann joined the First Baptist Church in Gainesville in 1949.  She sang in choir and taught Sunday School for a number of years.  She was active in the American Legion Auxiliary Unit #7 having served as President and Chaplain through the years.  She was also a member of Cabane 1317, Forty et Eight.  She worked in the “Dog House” at Bingo and made brownies every week for many years.   She was also known for her pecan pies that she enjoyed sharing with friends.

In addition to her parents, she was preceded in death by her husband, Bob, and by her brothers Ray (Hautense), Allen (Lurie), Frances (Julia) and Lamar Trapnell.

A private ceremony will be held for the family.  A celebration of life will be held when circumstances allow.  Interment will be at Memorial Park Cemetery.

Donations may be made to The First Baptist Church of Gainesville 751 Green Street Gainesville, Georgia 30501 or American Legion Post 7 2343 Riverside Drive Gainesville, GA 30501.