Blomqvist puts No. 60 Acura on Rolex 24 pole at Daytona 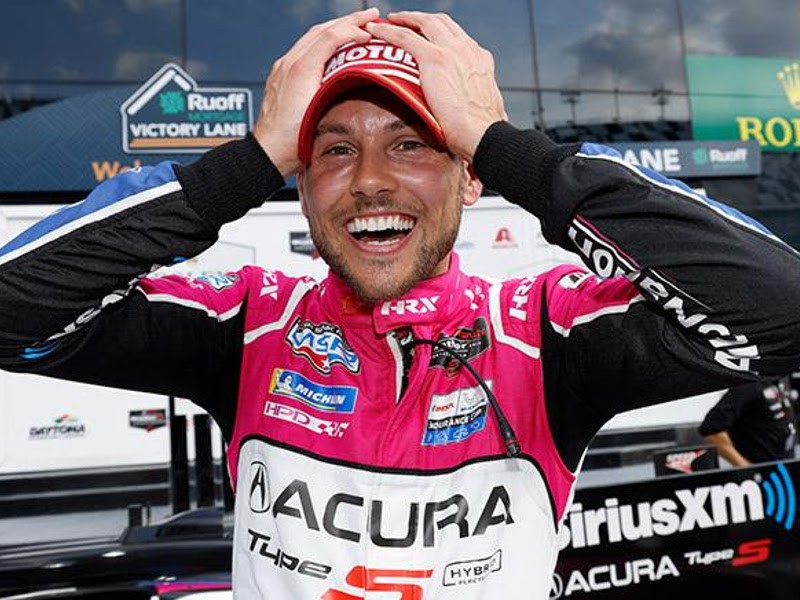 The first “official” marks of the IMSA WeatherTech SportsCar Championship’s 2023 season were set Sunday in Motul Pole Award qualifying to establish the lineup for the Rolex 24 At Daytona season opener.

Most attention was focused on the hybrid-powered prototypes making up the reborn Grand Touring Prototype (GTP) class, and the qualifying session lived up to the hype.

In a dramatic final moments, Tom Blomqvist turned the best lap of the entire three days of Roar Before the Rolex 24 on-track activity, putting the No. 60 Meyer Shank Racing with Curb-Agajanian Acura ARX-06 on pole position. Blomqvist will lead the 61-car field to the green flag on January 28, following an impressive lap of 1 minute, 34.031 seconds (136.295 mph).

Blomqvist’s fast time – set on the very last lap of the qualifying session – bettered Felipe Nasr in the No. 7 Porsche Penske Motorsport Porsche 963 by a slight 0.083 seconds. The top eight GTP cars were separated by only 0.815 seconds.

“That was one of the most difficult sessions I’ve done because my tires weren’t exactly fully, fully ready and I didn’t have much of a good reference to go off of, so I was glad to win that one,’’ Blomqvist said of his fourth career Motul Pole Award and first for the Rolex 24.

Meyer Shank Racing paced the first four practice sessions of the weekend leading up to qualifying. But the pole appeared in jeopardy when Nick Tandy went off course in the No. 6 Porsche Penske Motorsport, bringing out a red-flag stoppage with Blomqvist sitting in seventh place. Once the track was cleared, it left time for a single flying lap for each car when the green flag returned.

“Thankfully that was just enough time for one lap,” Blomqvist said. “I don’t really know how I did it, but my lap was made easier because the car has been quick all weekend and I know what I had underneath me.”

Blomqvist, who pitted to change tires early in the session, conceded he was worried about getting a crack at the pole position during the red-flag stoppage.

“I was actually a bit bummed because I thought it was kind of done for us, and then they said, ‘You’ve got one lap,’” Blomqvist of the team radio chatter. “I didn’t know what to expect, so I just kind of went for it on the out lap and had to get past one car and make a legitimate move on the out lap.

“I was lucky I had such a smooth running in terms of the car being so good and really didn’t have to do too many changes to the set-up. I knew what I had but today the track conditions were very different with the wind and the heat, so I just had to virtually send it and rely on my instincts.

“Thankfully, I managed to survive that,’’ he added smiling. “That was a fun day.’’

Two LMP2s spun with the help of breezy conditions and a “green track” after Saturday’s rain showers washed the rubber off the track surface.

“I felt like this was one of the more tricky qualifying sessions,” said Keating, who earned his fourth Rolex 24 pole and 12th of his IMSA career. He’ll share the No. 52 in the race with Paul-Loup Chatin, Alex Quinn and Nicolas Lapierre.

“You set your car up so you’re on the edge in the Bus Stop (the chicane on the oval backstretch),” Keating explained. “All weekend, we had a slight headwind going into the Bus Stop. Today, we had about a 19-mph tailwind, and that made a huge difference in our car.”

John Farano, wheeling the No. 8 Tower Motorsport ORECA, spun and made heavy contact into a tire wall in Turn 7. Fred Poordad also went off course in turn 6 in the No. 55 Proton Competition ORECA.

“I expected it to be tricky, but it’s never quite real until you get out there and start doing it,” Keating said. “I had quite a few ‘moments’ in the car at the Bus Stop and I was not surprised to see a car go off there.”

“I got a nice tow off of Thomas and that made about half a second worth of difference,” Keating said.

Eighteen-year-old Nico Pino scored his first IMSA WeatherTech SportsCar Championship pole with a blistering lap of 1:43.197 (124.189 mph) in the No. 33 Sean Creech Motorsport Ligier JS P320. Pino leapfrogged past Dakota Dickerson (No. 36 Andretti Autosport Ligier) on the speed chart late in the qualifying session. Dickerson wound up second fastest with a lap of 1:43.307 (124.057 mph).

It was a big day for Pino and car owner Sean Creech, who has a race shop in Jupiter, Florida. It was Creech’s first Daytona pole as a car owner.

“This is a special one,” Pino said. “This was my first pole (ever). We have a long race coming ahead – 24 hours. This was a 15-minute qualifying session.”

Pino will share the No. 33 with Lance Willsey, Danny Soufi and four-time Rolex 24 winner Joao Barbosa.

“We have done a lot of work fine-tuning the car,” Pino said. “We had our ups and downs through the practice sessions, but now we have a good baseline to start working with the team for the race. I’m looking forward to it.”

Tried and true trumped new and unproven in qualifying for the GT Daytona (GTD) and GTD PRO classes.

Mercedes-AMG drivers produced the four fastest laps in the combined 15-minute session at the annual Roar Before the Rolex 24, led by Philip Ellis in the No. 57 Winward Racing Mercedes-AMG GT3. Ellis pushed the V-8-powered machine around the 3.56-mile, 12-turn Daytona road course in 1 minute, 46.093 seconds for an average speed of 120.799 mph to earn the Motul Pole Award for the GTD class and the overall top starting spot among the 33 GT entries.

That bested similar Mercedes driven by Fabian Schiller, Mikael Grenier and Maro Engel. Schiller came closest, clocking 1:46.312 in the No. 75 Sun Energy 1 GTD entry. Engel, who managed 1:46.784 in the No. 79 WeatherTech Racing entry, was the Motul Pole Award qualifier in the GTD PRO class.

There is no split grid between GTD PRO and GTD in WeatherTech Championship races, so all 33 cars (24 in GTD, nine in GTD PRO) will line up in order based on their qualifying times. Although the cars are identical, different driver rating requirements and the level of additional factory support involved makes it unusual for one GTD entry to beat the GTD PRO field, let alone three.

“The last half of the 2022 season, we were really, really strong, and the plan was basically to keep that momentum going into this year,” said Ellis, who earned his first career IMSA pole. “The team did great work in the offseason during the winter, and I think all the Mercedes did a great job.

Ellis, who will be partnered in the Rolex 24 with Russell Ward, Indy Dontje and Lucas Auer, admitted he took some satisfaction from besting the top GTD PRO entries.

“Of course, it’s nice to be at the very top of the GT field, but it doesn’t really mean much,” Ellis said. “The cars are the same; we have the same BoP (Balance of Performance), so it’s not like it used to be with the old GTLM (GT Le Mans class).

“So this is the icing on the cake, but it doesn’t mean anything for the racing, unfortunately. It’s a completely different animal to go through the 24 hours.”

Engel – who along with Ellis, Ward and Dontje won the 2021 Rolex 24 in the Winward GTD entry – similarly downplayed the interspersing of GTD and GTD PRO cars in qualifying. Also a first-time IMSA pole winner, Engel’s co-drivers this year in the No. 79 WeatherTech Racing Mercedes are Cooper MacNeil, Daniel Juncadella and Jules Gounon.

“We definitely have an amazing car,” Engel said. “The Mercedes-AMG GT3 is a car that’s well adapted to all forms of GT racing, whether long-distance or the sprint rounds. It’s always a car that gives the driver confidence, and I think all four teams did a really good job today.

“There was some room for me to improve in that qualifying session, but it was still good enough for pole,” he added. “So that’s great. It’s a huge field of GT cars, and being at the sharp end is good for the start and trying to stay out of trouble.”

The fastest non-Mercedes qualifier was Ross Gunn in the No. 23 Heart of Racing Aston Martin Vantage GT3 in the GTD PRO class at 1:46.825. Kyle Marcelli, who set the early pace at 1:46.867 in the No. 93 Racers Edge Motorsports with WTR Acura NSX GT3 (GTD), rounded out the top six.

Cars with new models for 2023 to the WeatherTech Championship include Lamborghini, Ferrari and Porsche. The top Lamborghini Huracán GT3 EVO2 qualified 14th among the GT cars (Andrea Caldarelli in the No. 63 for Iron Lynx, 1:48.233, sixth in GTD PRO), one spot ahead of the highest-placed Ferrari 296 GT3 (Antonio Fuoco, 1:48.309, in Cetilar Racing’s No. 47 GTD entry).

The seven examples of the new 992-generation version of the Porsche 911 GT3 R all qualified toward the back, led by defending Rolex 24 GTD class winner Jan Heylen and the No. 16 Wright Motorsports Porsche with the 21st fastest lap (148.942). Last year’s GTD PRO winner at Daytona, the No. 9 Pfaff Motorsports Porsche, qualified 22nd Sunday by Laurens Vanthoor (1:48.977).

Rolex 24 At Daytona practice starts Thursday. The 24-hour race begins Saturday with the start airing live on NBC at 1:30 p.m. ET Saturday and the conclusion beginning at noon Sunday, Jan. 29. Flag-to-flag coverage is available on Peacock.