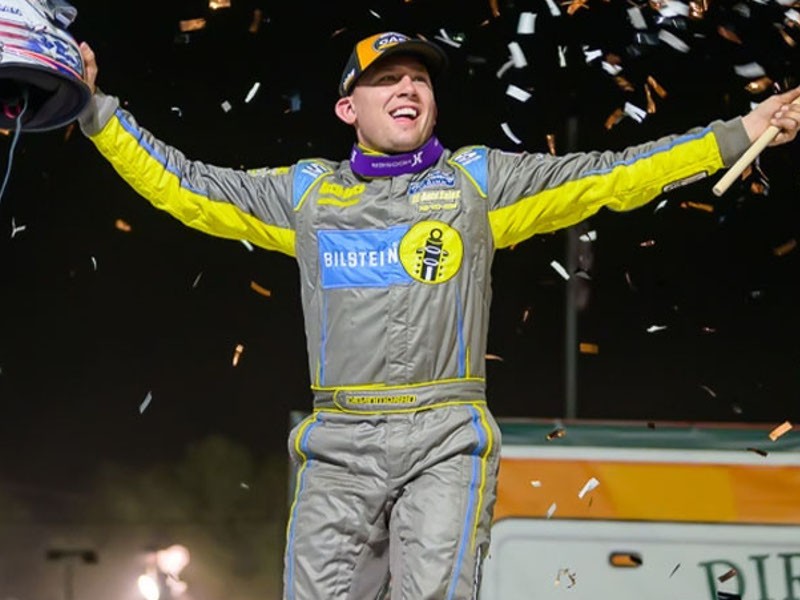 Moran said he could only describe his perfect start with one word: Awesome.

“I said we could only go downhill from here last night, but the ship ain’t sinking yet,” Moran said. “My guys have been working their butts off, working really hard, and doing everything they can to provide me with a good race car.”

Moran started third in the 25-lap feature as Ricky Thornton, Jr. and Nick Hoffman traded the lead in front of him.

However, a caution on lap 8 for Mark Whitener gave Moran a chance to battle for the lead.

Restarting on the outside lane, Moran nosed ahead of Ricky Thornton, Jr. down the front stretch and then closed in on Hoffman.

Moran powered to the inside of Hoffman in turn 4, using his momentum to lead lap 8 by inches.

Those inches were all he needed, as a caution for Jimmy Owens slowed the field for the second time on lap 9, giving Moran a lead he wouldn’t relinquish.

Moran said that caution was crucial in scoring his 11th career Series win — one worth $8,000.

“I really didn’t know if we completed a lap or not,” Moran said. “I was praying that we did. I saw the (scoreboard) say 99, then 9, so I kind of assumed we did. I knew (Hoffman) wouldn’t make a mistake twice on that restart, so I’m glad we took advantage of it when we did.”

Tim McCreadie finished in second, with Thornton in third, Hoffman in fourth, and Chris Madden in fifth.

The World of Outlaws CASE Late Model Series is scheduled to return to action on Thursday, February 16 during the DIRTcar Nationals at Volusia Speedway Park. For more information, visit WorldofOutlaws.com.