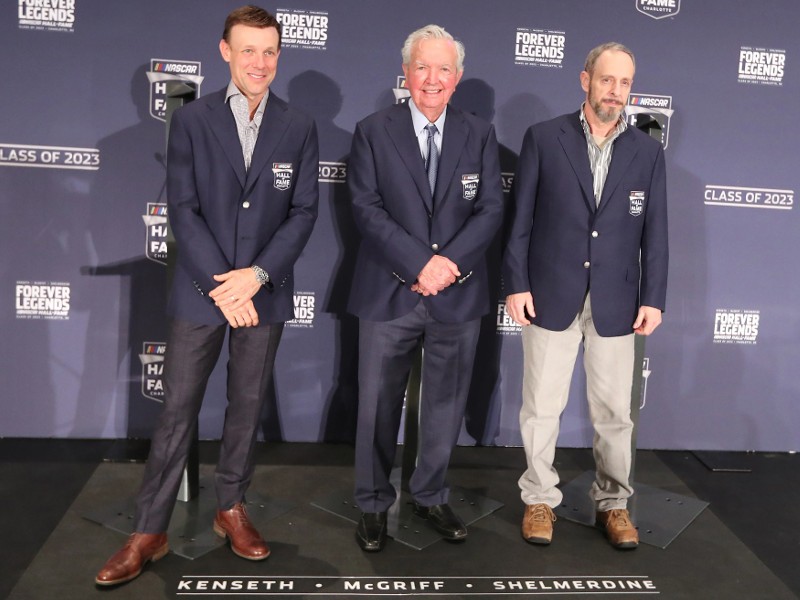 CHARLOTTE, N.C. - On Friday night at the Charlotte Convention Center, the NASCAR Hall of Fame welcomed a formidable champion of the stock car racing’s premier division, one of the NASCAR Cup Series’ most successful modern-era crew chiefs and a driver who competed in NASCAR events during seven different decades as the Hall of Fame Class of 2023.

Matt Kenseth, the 2003 NASCAR Cup Series champion, Kirk Shelmerdine, who guided Dale Earnhardt, Sr. to four Cup titles, and Hershel McGriff, who won four Cup races in 1954 and competed in NASCAR racing in 2018 at age 90 were inducted into the Hall of Fame during a ceremony in the Crown Ballroom.

In 18 full-time seasons at NASCAR’s highest level, Kenseth won 39 races, tied with Hall of Famer Tim Flock for 21st all-time. Driving for team owner and Hall of Famer Jack Roush, Kenseth was the last champion of the Winston Cup era.

In fact, Kenseth is credited, perhaps facetiously, with prompting NASCAR’s move to a Playoff format in 2004. Kenseth won his title the year before with a single victory and wrapped up the championship in the season’s penultimate race.

But his consistency that season was the factor that sustained his title run. Kenseth scored 25 top 10s in 36 races, ran second three times and led the Cup standings after each of the final 33 races of the season.

In 2013, Kenseth moved from Roush Fenway Racing to Joe Gibbs Racing, won seven Cup races in his first season with his new team and finished second in the final standings for the second time in his career.

“I always looked at my career as a ladder,” said Kenseth, who led Modern-Era balloting with 69 percent of the vote. “You start at the bottom, and you hope you climb your way to the top. My ladder had hundreds and hundreds of rungs on it, and without any of them — bottom, middle or top, wherever you sit — I wouldn’t be standing here without any of you.

“So, really, from the bottom of my heart, thank you all.”

Shelmerdine’s star shone brightly during a relatively short tenure as a top-level crew chief. After a three-year stint with driver James Hylton, Shelmerdine moved to Richard Childress Racing. In 1983, at age 25, he got his first Cup victory — and the first-ever victory for Childress — with driver Ricky Rudd on the road course at Riverside, California.

The following year, Shelmerdine was paired with the driver who would help to define his career. With driver Dale Earnhardt at RCR, Shelmerdine won twice in 1984, four times in 1985 and five times in his first championship season in 1986.

After the 1992 season, Shelmerdine left RCR to pursue a career as a driver that led to 26 Cup starts and three victories in the ARCA Menards Series. He returned to the crew chief role for one season in 1996, leading David Green’s Xfinity Series campaign. Green won twice and finished second to Randy LaJoie in the final standings.

Dale Earnhardt, Jr. inducted Shelmerdine and credited the crew chief with putting his seven-time champion father “on the path to greatness.”

Shelmerdine, who was named on 52 percent of the Modern-Era ballots credited Hylton, Childress and Earnhardt, Sr. with the success that earned him a place in the NASCAR Hall of Fame.

“What makes a great crew chief?” Shelmerdine asked rhetorically. “It’s simple — a great driver. We all knew Dale. What else can you say about him? I’m not sure. I think very few people knew how sensitive he really was — I mean all the senses.

“When he and I got together, we just kind of clicked intuitively on how to talk about the car and what he needed to do all those things he could do… We all loved old Ironhead, and sometimes even we thought he was magic.”

McGriff’s storied NASCAR career began in 1950 when he raced his own car in the Southern 500 at newly built Darlington Raceway.

That was the first of 87 NASCAR Cup Series starts and the first chapter in a stock car racing tenure that wouldn’t end until 2018 (for the time being), when McGriff made the last of his 271 NASCAR ARCA Menards Series West starts at Tucson Speedway — at age 90, as the oldest driver to race in NASCAR-sanctioned competition.

McGriff, who turned 95 in December, collected all four of his Cup wins in 1954, driving for Georgia Racing Hall of Fame car owner Frank Christian, but his greatest success came on the West Coast, where he won 34 times in what is now the ARCA Menards Series West.

During his varied career, McGriff also raced twice in the 24 Hours of Le Mans, in 1976 in his own car and in 1982 in the so-called “Snowplow Camaro” fielded by car owner Billy Hagan, with Dick Brooks as his co-driver.

At Friday night’s induction dinner, team owner Richard Childress revealed that he and McGriff had struck a deal for Childress to prepare a car for McGriff after he turns 100.

“We shook on it,” Childress said.

“My speech shouldn’t be too long, because most of the people I have to thank are dead,” said McGriff, who received 31 percent of ballots cast in the Pioneer category, edging A.J. Foyt for the honor. “But I truly can’t express in words what this means to me.

“I grew up loving to drive. I started at seven years old with a cart that was pulled by a goat that I bought from my uncle for $4… at 14, I was just starting eighth grade, and I was the only person in school who had a car — including the teachers and the principal.”

For those who wanted to learn more about his life, McGriff suggested that they read his book, “which hasn’t been written yet.”

As part of the ceremonies, the late T. Taylor Warren became the first photojournalist honored with the Squier-Hall Award for NASCAR Media Excellence.

Warren began photographing race cars at the Milwaukee Fairgrounds in 1948, and it was his finish-line photo of the 1959 Daytona 500 that helped decided the winner of the inaugural Great American Race. Warren’s daughter Diana accepted the award on his behalf.

In addition, NASCAR Vice Chairman Mike Helton, a fixture in the sport for nearly five decades, was honored with the Landmark Award for Outstanding Contributions to NASCAR.

In a racing career that started with a stint as public relations director at Atlanta Motor Speedway, Helton advanced to the role of NASCAR President in 2000 — as the first person outside the France family to hold that position.

Helton, who now serves as Vice Chairman of NASCAR, has long been an advocate for enhanced safety measures on the competition side of the sport.

“I’ve always been better at celebrating all the other people’s accomplishments and contributions to NASCAR,” Helton said. “So, this is a bit humbling to me. But it’s much appreciated, and it’s overwhelming, and I’m not too sure that I’ve gotten my head wrapped around it completely.

“But it’s special. This Hall is special. This evening is an example of how special our history and our heritage and our future is built, and it’s been over the moon for me.”