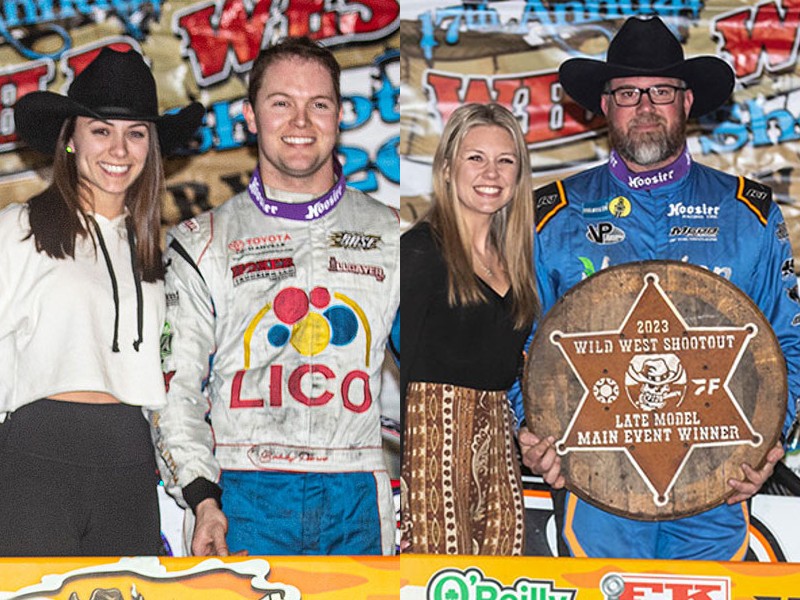 Bobby Pierce won the battle at New Mexico’s Vado Speedway Park on Sunday night, but it was Jonathan Davenport who won the war.

Meanwhile, Davenport soldiered home to a sixth place finish after tagging the wall on lap 25. That was good enough for the Blairsville, Georgia speedster to take home the overall Wild West Shootout championship.

Pierce came out on top of a back-and-forth battle between himself, Larson, Mike Marlar and Davenport in the 50 lap feature to take his second win of the six race mini-series and pocket a $25,000 payday.

Pierce lost the lead three times but kept fighting back, finally regaining command from Marlar on lap 43 and then turning back furious challenges from Larson to secure the win.

Pierce crossed the finish line 1.159 seconds ahead of Larson in a wildly competitive feature that included six lead changes among four drivers.

The trajectory of the race was essentially set in its initial moments when front-row starters Pierce and Davenport swapped the lead each of the first four laps — Pierce leading the first and third circuits, Davenport surging ahead on the second and fourth tours.

Pierce rallied to regain command from Davenport on lap 18 only to lose the position on lap 34 to Marlar.

Pierce fell to third place when Larson followed Marlar past him. But he kept plugging away and ultimately slid past Larson for second on lap 41 and sailed around the outside of Marlar off turn four to move in front on lap 43.

Pierce seized the opportunity to overtake Marlar, pushing into the lead. He had to survive a relentless barrage of sliders from Larson over the remaining circuits, including a deciding exchange on lap 47 in which Pierce crossed over to Larson’s inside off turn four to stay ahead.

Larson finished in second, with Marlar in third, Stormy Scott in fourth, and Garrett Alberson in fifth.

Davenport led laps 2 and 4-17, but fell short of claiming a $25,000 bonus for winning four WWS features, finishing sixth after a lap-25 slap of the outside wall between turns one and two cost him several positions that he never recovered.

But he was crowned the WWS points champion, duplicating a crown he previously wore in 2016 (at USA Raceway in Tucson, Arizona) and ’21 (at Arizona Speedway outside Phoenix).

“We just over-adjusted really,” Davenport said. “We was too tight from the get-go, and then we bicycled pretty hard there on the cushion (on lap 25) and I don’t know if I bent anything or not but it just wasn’t the same after that.”