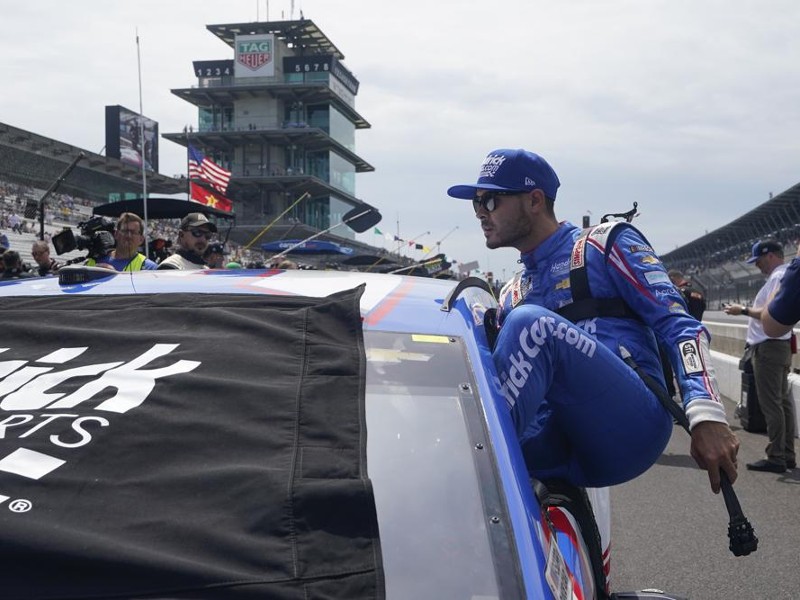 FILE - Kyle Larson climbs into his car before a NASCAR Series auto race at Indianapolis Motor Speedway, Sunday, Aug. 15, 2021, in Indianapolis. Kyle Larson will attempt to race the Indianapolis 500 in 2024 with McLaren Racing in a joint effort with NASCAR team owner Rick Hendrick. The surprise Thursday, Jan. 12, 2023, announcement by McLaren and Hendrick at last gives Larson a path into his dream race.(AP Photo/Darron Cummings, File)
Contact Editor

CHARLOTTE, N.C. (AP) — Kyle Larson will attempt to race the Indianapolis 500 next year with McLaren Racing in a joint effort with NASCAR team owner Rick Hendrick.

The surprise announcement Thursday by McLaren and Hendrick at last gives Larson a path into his dream race. It also means he will become just the fifth driver to run “The Double” on Memorial Day weekend, driving the Indy 500 and Coca-Cola 600 in Charlotte, North Carolina, on the same day. John Andretti, Robby Gordon, Tony Stewart and Kurt Busch are the other NASCAR drivers to compete in both races.

Larson has long said he wants to race in the Indy 500 but did not have a viable Chevrolet opportunity for the 2023 running of “The Greatest Spectacle in Racing” this May.

His entry with McLaren will be co-owned by Hendrick and sponsored by HendrickCars.com, the primary backer of Larson’s ride in NASCAR.

“Competing at the Indianapolis 500 is a dream of mine and something I’ve wanted to do for a very long time — since I was a child before I ever began competing in sprint cars,” Larson said. “I’m grateful for the opportunity and am really looking forward to it even though it’s still about a year-and-a-half away. I’m really looking forward to competing in both the Indianapolis 500 and the Coca-Cola 600 and maybe even get a win or two that day.”

McLaren did not have room for Larson — or Kyle Busch — this year as the Arrow McLaren lineup for Indianapolis is already at four cars. The team expanded this year to add 2016 Indy 500 winner Alexander Rossi to its roster and hired 2013 Indy winner Tony Kanaan for the 500.

To make room for NASCAR's 2021 Cup champion next season, McLaren partnered with Hendrick, who will enter his first ever IndyCar race as an owner . Hendrick Motorsports has won a record 291 Cup races and has scored 10 NASCAR wins on Indy's 2.5-mile oval.

Larson is entering his third season driving for Hendrick Motorsports and had been actively pursuing an Indy 500 ride. Rick Hendrick relaxed his stance on drivers competing in other series about the time he signed Larson, and teammate Alex Bowman this week is competing in the sprint car Chili Bowl in Oklahoma.

“Putting Kyle in top-level equipment and allowing ample time for him to prepare for such a difficult challenge was important," Hendrick said. “It’s going to be very, very special to field a Chevrolet in the Indy 500 as a car owner. A collaboration like this was what we needed to make it happen, and fortunately the stars aligned.”

The 30-year-old Larson, who just welcomed his third child on Dec. 31, has 19 Cup Series victories since his 2014 debut. He won NASCAR's all-star race in 2019 and 2021, the year he won 10 races and his only Cup title. The Elk Grove, California, native has more than 400 career wins across a variety of racing series and disciplines.

“Adding Kyle Larson with a HendrickCars.com partnership to the Indy 500 lineup in 2024 is exciting for our Arrow McLaren team as well as for race fans," McLaren head Zak Brown said. “He’s a complete driver, known for racing anything on wheels, so I’m looking forward to seeing what Kyle can do.”