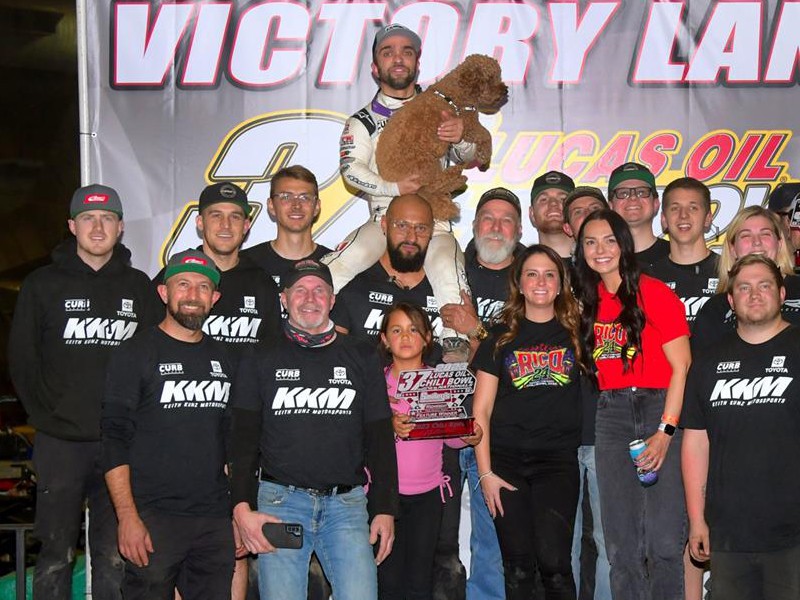 TULSA, Okla. - Rico Abreu made the move for the lead through the final two turns in Wednesday night’s A-Feature in the Lucas Oil Chili Bowl qualifier at Oklahoma’s Tulsa Expo Raceway.

It marks the 34th win in event history for the Keith Kunz Motorsports/Curb-Agajanian team, and is the 12th consecutive event that Kunz’s team has won a Chili Bowl A-Feature.

The win came on a night that left a lot of those in attendance shaken.

Driver Ashton Torgerson was transported to an area hospital following an accident during the feature event. Togerson was alert and communicating with track officials before being transported.

The Torgerson family updated his condition via Facebook at 11:20 pm (CT) on Wednesday night.

“Ashton is alert and talking. Moving hands and feet He is passing all the administered tests thus far and is about to go in for a cat scan. Thank you for the outpouring of support.”

“Most important part is that the Torgerson family is in our prayers,” Abreu said following his victory. “It’s tough to be out there racing going through experiences like that, but we’re all racecar drivers here, and we’re all racing to win.”

Abreu battled with Blake Hahn and Brent Crews through much of the last half of the feature. A caution flag with six laps to go reset the field with Abreu moving to the cushion while Moles and Crews worked the bottom line.

Abreu grabbed the second position with two laps to go, and closed the gap to a few car lengths with the white flag in the air.

Abreu raced high in the final turn, and pulled ahead to win by 0.223 seconds at the checkered flag.

“Towards the last half of the race, I could make up some time,” Abreu said. “After that last restart with six to go, I saw Chad (Boat) tell him to go down, so I just went up. I wasn’t going to follow him. It was just a pretty easy decision for me.”

Moles finished in second, and joins Abreu as being locked into Saturday night’s A-Feature.

Brent Crews held on for third, with Hahn fourth, and Kevin Thomas, Jr. in fifth.