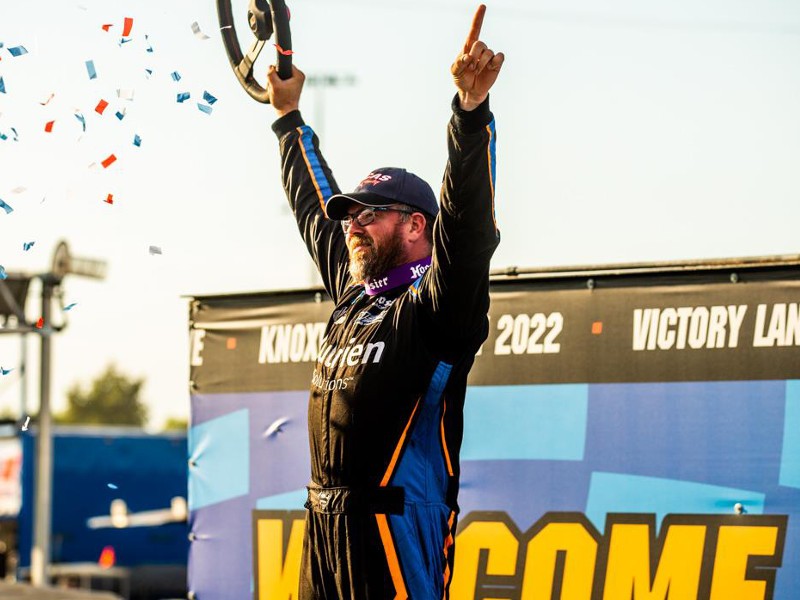 Jonathan Davenport took the lead with two laps to go from Tyler Bruening and went on to win the 18th running of the Lucas Oil Late Model Dirt Series Knoxville Nationals on Sunday afternoon.

The victory was Davenport’s first in the only Late Model event at Iowa's famed Knoxville Raceway.

Bruening, an Iowa native, led from lap 10 to lap 47 when Davenport, who hails from Blairsville, Georgia, dove under him to take the top spot, denying him his first career crown jewel victory in heart-breaking fashion.

Davenport took the lead early with Bobby Pierce rolling into the second spot. Pierce trailed Davenport for the first eight laps of the race until he took the lead on lap nine. With nine laps complete a caution for Justin Zeitner slowed the field. During the caution period Pierce headed to the hot pit with issues that ultimately ended his race.

On the restart, Bruening vaulted to the lead becoming the third different leader in the first ten laps. It was a tightly contested race between Bruening, Pearson, and Davenport until a pair of cautions on laps 19 and 21 kept the field bunched up.

At the halfway mark it was still Bruening showing the way. With the last 29 laps going caution free, it appeared Bruening was within reach of the biggest win of his career.

As the laps wound down, Davenport had broken away from a battle with Pearson that had gone on for several laps between the two veteran drivers. Bruening had a little more than a two second lead that started to slip away as Davenport to close the gap on the top side. Davenport was within striking distance with 47 laps complete and then heading into turn

“I wish I could have said that I was planning for that. I was just too tight there,” said Davenport, who won for the 21st time overall this season. “I didn’t have the best race car by far. I made a mistake first in lapped traffic I thought I might get rolled on the outside and let Bobby around me so I chose the bottom and let Tyler (Bruening) around me. I was trying to race Earl (Pearson, Jr.) as clean as I could there, but I knew I had to get by him. I got a big run on Tyler there one time getting into one. I could have blasted on him, but I knew this could be his first crown jewel, so I didn’t want to take it away from him like that.”