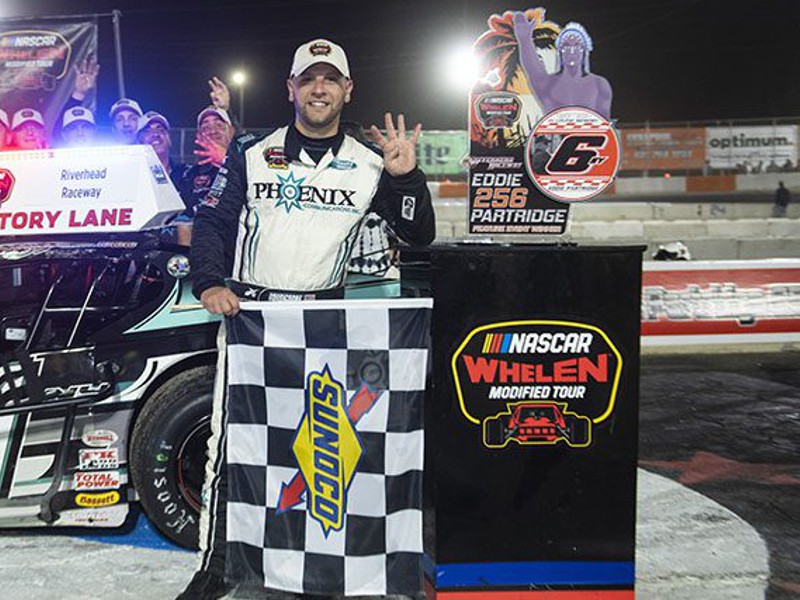 RIVERHEAD, N.Y. — Over the last decade, no driver in the NASCAR Whelen Modified Tour has been as dominant at New York’s Riverhead Raceway as three-time champion Justin Bonsignore.

On a Saturday night when Riverhead’s late owner in Eddie Partridge was being honored with a 256-lap feature, it was only fitting for Bonsignore to put together a typical, efficient performance that yielded him his ninth victory at the track, the most of any active driver.

Bonsignore said Partridge’s impact on the Modified community will be felt for years to come, but he is thrilled Riverhead general manager John Ellwood and his staff are doing everything possible to keep the track’s vibrant culture thriving.

“It’s a shame we lost Eddie last year, but it’s unbelievable what (Riverhead) does each and every week (to honor him),” Bonsignore said. “I’m so happy they keep the racing going for all of us. This is the best car we’ve ever had here, and I think we could have won it in 200 (laps).

“Momentum is a thing, and now I’ve knocked off two wins in a row.”

Bonsignore’s first NASCAR Whelen Modified Tour victory at Riverhead came back on July 30, 2011, when he fended off Todd Szegedy after leading a race-high 158 laps. Since that inaugural win, Bonsignore has emerged as one of the most dominant drivers in Riverhead’s storied history. He has finished inside the top five in 20 of his 24 appearances at the track on the NASCAR Whelen Modified Tour, all while leading more than 1,000 total laps.

On Saturday, the inclusion of live pit stops inside Riverhead’s infield and an extended race distance presented unique challenges for Bonsignore. He trusted his crew with the car but anticipated other competitors would try to overtake him on a different pit strategy.

Patrick Emerling would be the one to gamble on pit stops. After briefly taking the lead from Bonsignore on a restart, he elected to take two rear tires on Lap 139 and inherited the top spot after Bonsignore and the rest of the frontrunners came in for service of their own.

Despite the risk, Emerling with his older tires ultimately could not fend off Bonsignore, who made the race-winning pass with 25 laps remaining and withstood one last charge from Emerling to add another Riverhead victory on his resume.

Emerling was confident his car was strong enough to visit victory lane at Riverhead for the second time, but he admitted he needed circumstances to play out differently so he could be in a better position to fend off Bonsignore.

“The cautions just didn’t fall in our favor there,” Emerling said. “We are disappointed with a second, and I guess that’s a good thing. I could have ran (Bonsignore) a little bit rougher, but I guess we’re proud of running him clean there. We’ll look forward to the next time here.”

For Emerling, who was less than 24 hours removed from a 27th-place finish in the NASCAR Xfinity Series race at Bristol Motor Speedway, he believes the Eddie Partridge 256 was another positive sign that his Modified is continuing to make progress following a three-win season in 2021.

Although the Xfinity Series is his primary focus now, Emerling still enjoys competing against Bonsignore, Doug Coby and the rest of the NASCAR Whelen Modified Tour veterans, adding that his second place run Saturday only gives him more motivation to improve himself as a driver.

“We got two hours of sleep (between Bristol and Riverhead), so this was a long weekend for us,” Emerling said. “We struggled a little bit at Bristol yesterday, but it was a strong run for us (on Saturday). I wish there was a little more I could have done there, but we’ll get (a win) next time.”

Bonsignore was expecting Emerling to race him aggressively after the two came together at Thompson Speedway Motorsports Park earlier this year, but he was pleased that the two were able to engage in a clean-but-hard fight for the win.

Even with fresher tires, Bonsignore knew he could not rely solely on that advantage to overtake Emerling. He described the final laps as a stressful experience with Emerling in his rearview mirror but was relieved he could add another chapter to a legacy Partridge helped keep alive.

“The tires don’t really fall off,” Bonsignore said. “You have to have 80 or 90 laps on them (before the start to wear). Our car with the rear tires was naturally tighter, but (Emerling) still hung in there until the end with us.”

With his victory in the Eddie Partridge 256 on Saturday, Bonsignore not only inches closer to Mike Ewanitsko’s series record of 11 wins at Riverhead, but now finds himself deep in the NASCAR Whelen Modified Tour championship hunt alongside Ron Silk and Jon McKennedy.

Silk came home in the third position with Coby in fourth and Eric Goodale in fifth. Rounding out the top 10 were rookie Austin Beers, Craig Lutz, Timmy Solomito, Kyle Soper and McKennedy.

The penultimate race on the 2022 NASCAR Whelen Modified Tour schedule will see the series head back to Connecticut’s Thompson Speedway on October 8.