Football: Miller sparks Raiders to 14-3 win over Jackson Co. to open 8-6A 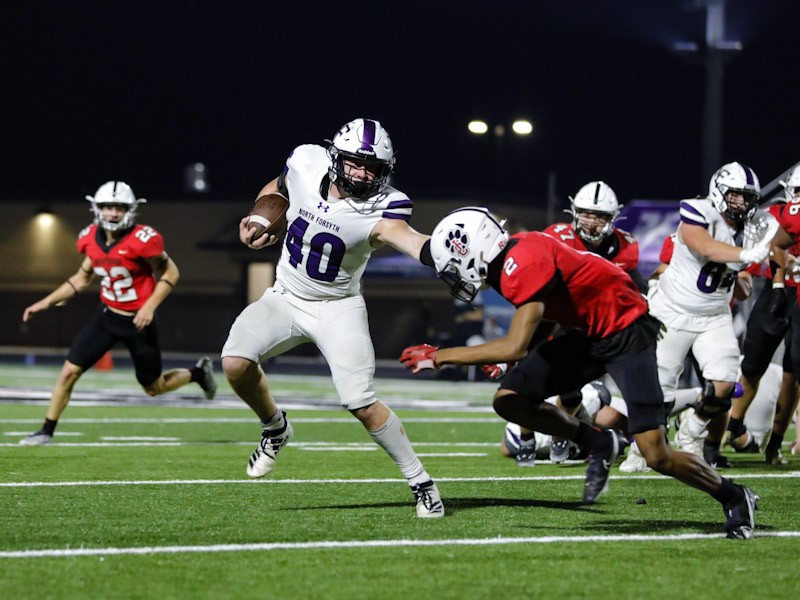 HOSCHTON, Ga. — North Forsyth came into its Region 8-6A opener against Jackson County Friday night with a top 20 passing attack in the state.

However, coach Robert Craft and the Raiders went really old school in the second half, breaking out a 1940’s-style power run game that eventually propelled them to a 14-3 win.

Collin Miller, who already had two sacks and five tackles on defense, was the main battering ram. The Division I linebacker prospect had six straight carries for 44 yards, culminating with a 1-yard touchdown run to give the Raiders (3-2, 1-0 Region 8-6A) a 7-3 lead on the second play of the fourth quarter.

After amassing just 15 yards on the ground in the first half, the formation change led to 132 yards rushing in the second half. Miller finished with 47 yards on 7 carries and Karson McBrayer piled up 61 of his 76 yards after halftime as well.

“We felt we had an advantage up front, so we went to that (power formation) in the second half,” Craft said. “We’ve been running that a little bit all year. They did a great job of executing.”

A short punt on the next Panthers possession eventually led to a 35-yard touchdown pass from West Roberts to Logan Curry on fourth down for a 14-3 lead with 7:34 left.

For Jackson County (1-4, 0-1 Region 8-6A), the loss kept a frustrating trend going. The Panthers have led at halftime in all five games but have had trouble hanging on.

Jackson County got its only points on a 25-yard field goal from Brice Rogers on the opening play of the second quarter for a 3-0 lead. They took that into the break.

The Panthers' defense held the Raiders to just 121 yards of offense in the first half, just 15 on the ground. Roberts, who came in fifth in Class 6A in passing, was just 9-of-16 for 106 yards and 1 interception as well.

But the Raiders defense bottled up the Jackson County offense the entire game.

The Panthers' longest play was a pair of 15-yard passes by Chase Berrong to Elijah Ling and Jacob Coombs. Their longest run was 6-yards by Berrong, and they managed just 19 yards rushing for the game.

“Jackson County has an explosive offense, and our game plan was just to keep them in front of us,” Craft said. “We did a great job all night, I thought.”

North Forsyth held the Panthers offense to just 101 total yards, just 8 yards rushing on 12 carries and sacked Berrong three times in the first half. Miller had two sacks and Chris Herock one for the Raiders.

The Panthers' scoring drive was set up by a short North Forsyth punt and three completions to get to the Raiders 7. But it stalled, setting up Rogers’ field goal.

The Raiders had a chance to tie the game late in the second quarter, with Roberts moving them to the Jackson County 14 on a 33-yard to Zach Shirley and an 11-yard pass to McBrayer. But the drive stalled on a holding penalty forcing a 44-yard Adrian Droze field attempt that fell well short.

Despite the early struggles, Craft said it's definitely how you finish that matters.

“Just any way possible to get a win. This was a big win for us to start the region, especially on the road,” Craft said. “The goal is to go 1-0 every week, so we’re not going to put too much on this one. But we’ll enjoy it and then get back to work next week.”

North Forsyth plays host to Shiloh next week while the Panthers travel to Apalachee in region action.