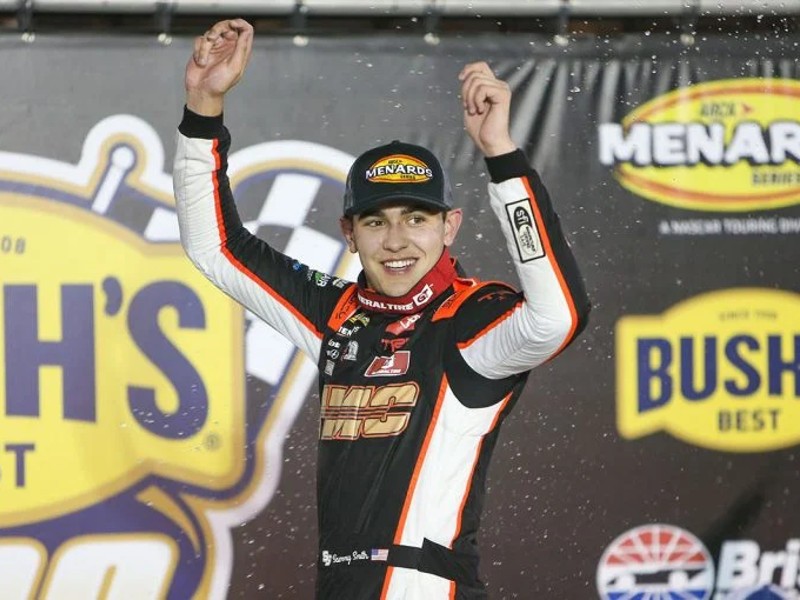 Not only did Smith win the Bush’s Beans 200, but he also claimed his second consecutive ARCA Menards Series East championship, the East Series owner’s title for Kyle Busch Motorsports, as well as the Sioux Chief Showdown crown.

While thrilled with the accomplishments, Smith was primarily focused on closing out the East Series season with a win, which was nearly disrupted by his teammate Brandon Jones during a green-white-checkered restart.

“That was tough,” Smith said about the last restart. “All of these guys brought a really fast car, and I wouldn’t be able to do this without them. That was a tough restart there, but I’m glad we pulled it off.”

From the first green flag of the 2022 East Series season at New Smyrna Speedway, not a single driver could consistently match the pace set by Smith.

In seven races, Smith tallied five victories and led nearly 800 laps. He also never finished outside the Top 5, with his worst performance of the season being a fifth-place run at Dover Motor Speedway.

Smith carried over his efficiency into the Sioux Chief Showdown. Even though the wins were not quite as frequent, Smith still managed to visit victory lane on four different occasions and maintained a perfect record inside the top 5.

One of the few people that has been able to best Smith is Jones, who saw a perfect opportunity to potentially overtake his teammate and claim his fourth ARCA Menards Series victory of the year after Ashton Higgins crashed to set up the two-lap sprint to the finish.

Jones knew he had one shot to pull alongside Smith on the restart, but ultimately could not make his car stick on the bottom. Despite being disappointed with second, Jones considered the evening a success and believes the knowledge obtained from Thursday will be beneficial towards pursuing a NASCAR Xfinity Series win at Bristol Friday night.

“I thought our Camry really came to life during those last 30 laps or so,” Jones said. “We started to catch Sammy, but I didn’t want to rough him up too much. I gave it all I had and I think I just got in too deep down in turns 3 and 4. I’m kicking myself a little bit for that, but this is a big help for (Friday’s Xfinity) race.”

Jones added that he was happy to see Smith celebrate his East Series and Sioux Chief Showdown. These achievements continue an all-around stellar 2022 for Smith that has also seen him make select starts in the Xfintiy Series as a teammate to Jones with Joe Gibbs Racing.

Smith expressed his gratitude to everyone at Joe Gibbs Racing and Kyle Busch Motorsports that have helped him be competitive every single weekend, but he said the goal for the rest of the year is to bring home as many wins as possible in both ARCA and Xfinity Series competition.

“These two championships mean a lot, but it wouldn’t have felt the same if we didn’t win the race,” Smith said. “All of these guys worked so hard all season and I’m glad we could pull this off.”

Taylor Gray overcame a spin shortly before the second race break to finish third, with Rajah Caruth in fourth and Daniel Dye in fifth.