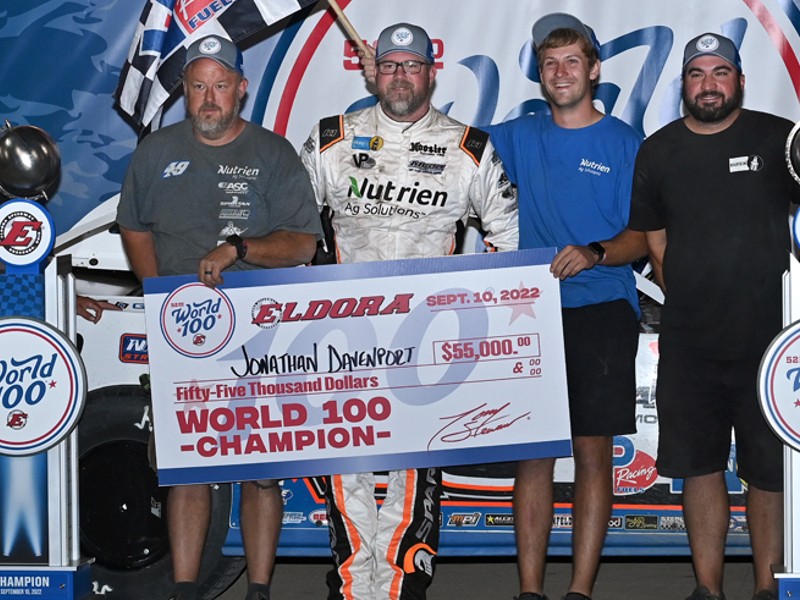 Jonathan Davenport came out on top of a battle of Peach State drivers to score his fifth World 100 victory at Eldora Speedway on Saturday night.

Davenport, from Blairsville, Georgia, lost the lead to Evans, Georgia’s Brandon Overton near the halfway point at the Rossburg, Ohio half-mile clay raceway.

Davenport returned the favor on a lap 55 restart, sliding past Overton in turn 2 to retake the top spot.

From there, Davenport drove away, beating Overton to the start-finish line by more than five seconds to earn his fifth World 100 triumph, worth $55,000.

“We weren’t great to start off with,” Davenport said. “I didn’t think we would be. As the tires kind of quit, our car got better and better. I knew when (Overton) got by me, it definitely worried me there. But I knew I had to get up on the wheel on the restart.

“I didn’t really go ahead and slide all the way across. I was just trying to block a little air, and that way, I could get to turn 3 first.”

The victory is Davenport’s second crown jewel triumph at Eldora this year, having won the Eldora Million in June, his eighth win overall at Eldora and is his fifth World 100 victory in his last seven starts at the event.

“I don’t know what it is about this place, I just love it,” Davenport said. “I just have a feel that I want here, and ever since I figured out what I need with my race car, it’s helped me learn even more.

“The long laps around the top, around the bottom, and around the middle, me and Overton run the same line around this place. It was definitely going to be hard to pass him if it wasn’t on a restart.”

Overton, the race’s defending champion, crossed the line second. Ironically, what helped him gain a win in the Dirt Late Model Dream three days earlier – when Chris Madden had a spark plug wire fall off – kept him out of victory lane on Saturday.

“Y’all ain’t gonna believe this,” Overton said. “My damn spark plug wire fell off when I was right there behind (Davenport). I just didn’t have nothing for him. It is what it is. Congrats to JD and them guys. We’ll take our second.”