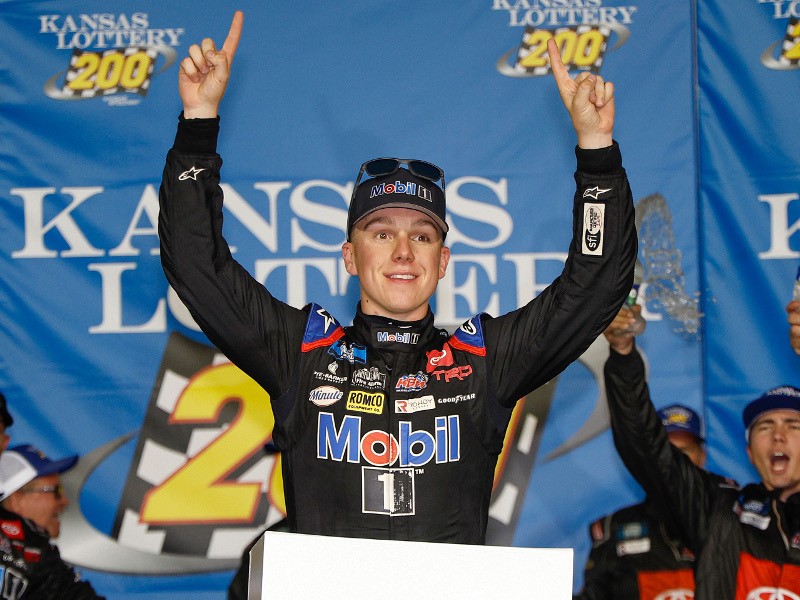 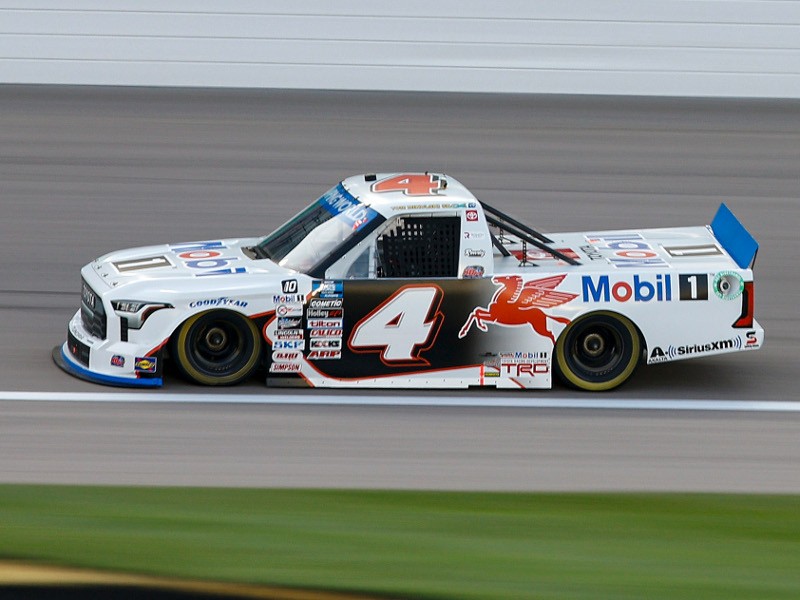 KANSAS CITY, Kan. – With less than a lap left in Friday night’s NASCAR Camping World Truck Series race at Kansas Speedway, John Hunter Nemechek passed Carson Hocevar and spoiled one of the unlikeliest long-shot gambles in the long history of the series.

At the end of a dominant evening, Nemechek had the race victory and two stage wins to go with the pole he had won earlier in the afternoon.

All Hocevar had was a fourth career runner-up finish and a pink slip where the 2022 Truck Series Playoffs are concerned.

Over the final 28 laps, Nemechek, who pitted under green on lap 103, overcame a 20-second deficit to Hocevar, who had made his last pit stop on lap 80 to top off the fuel cell in the No. 42 Chevrolet and tried to make it the rest of the way without another pit stop.

Hocevar gained the lead on lap 106 when the last contender in front of him came to pit road during the final 53-lap green-flag run. Throughout the final run, Hocevar’s advantage shrank by more than a second per lap, as Nemechek pursued him.

After Hocevar’s truck sputtered coming to the white flag, Nemechek charged to the front and powered his No. 4 Kyle Busch Motorsports Toyota across the finish line 1.815 seconds ahead of Hocevar’s Silverado. The victory was Nemechek’s second of the season, his second at Kansas (with one coming in the NASCAR Xfnity Series) and the 13th of his career.

“It’s huge,” said Nemechek, who added seven Playoff points to his total entering the Round of 8. “I just want to say thank you to everyone at Kyle Busch Motorsports. I can’t thank them enough for the truck they gave me tonight. It was absolutely unreal.

“We started on the pole, won both stages, led a ton of laps and won the race. We came in really good in points, but we were able to get some more Playoff points, and it puts us in a good spot. We have some momentum on our side heading into Bristol (for the first race of the next round).”

“Into (turn) 3 coming to the white flag, I started to sputter, and I knew it was game-over,” Hocevar said. “The 19 (Derek Kraus) had an issue, and I lost three seconds there. Looking back, I wish I could have gotten those back.

“Phil Gould made a hell of a call. I didn’t see it. Fifty-six laps to go, there’s going to be a yellow, right? Cutoff race, and it’s the Truck Series of all things… How was I to know the 19 was going to have a flat (tire) right in front of me.

“We deserved to win that race, just on strategy. We were nowhere near the best car. Seems like I always run second to him (Nemechek), but they were the class of the field all night. We got beat. We had the winning strategy. It just didn’t work out…

“I think I’ll be the bridesmaid at my own wedding.”