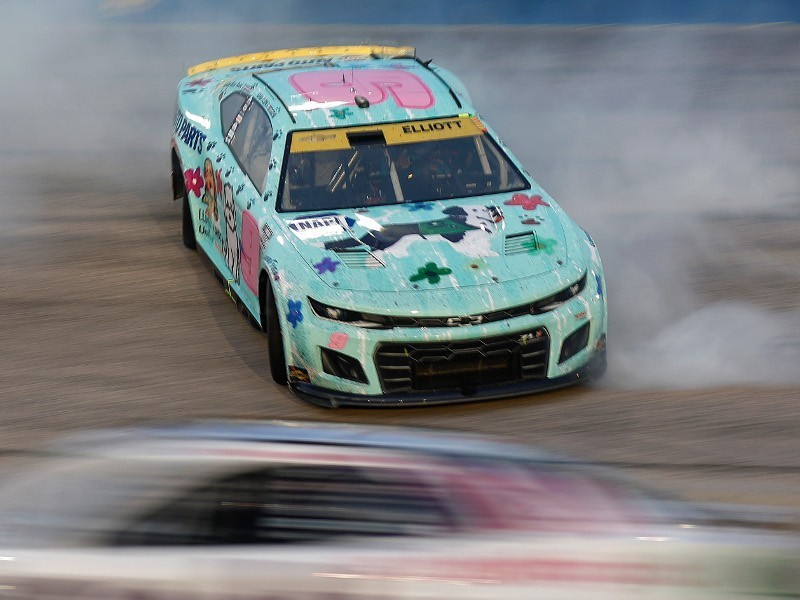 Or, for that matter, the fire coming from Kevin Harvick’s car.

Elliott's playoff opener was over early after the regular-season champion lost control of his No. 9 Chevrolet and brushed the wall in turns 1 and 2. Chase Briscoe, closing fast and with nowhere to go, collided with Elliott and caused too much damage for him to overcome.

His crew from Hendrick Motorsports tried to repair the broken lower control arm and toe link but ran out of time.

The result was a 36th place finish — dead last — and a big blow in the playoff race. Elliott dropped from the top seed to ninth heading into Sunday's race at Kansas Speedway, the second of three stops before the field is whittled from 16 to 12.

“It's not to say that I don't care," Elliott said this week, “but I recognize when you have something happen, there's nothing you can do after the fact. As much as I'd like to go back and change things and have a retry, that's not how it works. Really, you're only choice in that situation, having a bad day, is get prepared for the next week.”

In fact, Elliott turned his attention to Kansas before Harvick's car went up in flames at Darlington, leading to more dialogue over the safety of the Next Gen car, and Erik Jones gave the No. 43 its long-awaited 200th victory.

That last point was welcomed news.

Jones isn't in the playoffs, which means nobody earned an automatic berth to the next round with a win. So should it come down to the standings for Elliott to advance, the 2020 champion would have a little extra wiggle room.

“I didn't really have a thought how it would shake out,” said Elliott, who is 14 points ahead of Austin Cindric, the first driver below the cut line. “My thought process was just, ‘Dang, hate that we had our day go like that,’ and I think, you know, in the those moments with the points and everybody being as close as everybody is, you're going to be in the situation where there's a lot of guys really close to you, and that's what it's going to be like over the course of three weeks.”

Unless he gets a win. That would cure most ills.

Elliott has done it before at Kansas, winning the 2018 race to advance to the round of eight, and he was second at the intermediate track last fall. In fact, Elliott's been in the top five in five of his last starts at Kansas, and one of those other two — the race this past spring — he led 10 laps before a flat tire.

“Honestly, I don't really care about the other guys, and I'm not going to get excited about other guys' misfortune,” said Elliott, alluding to Harvick's inferno and fellow playoff contender Kyle Busch blowing his motor. “That's not how I operate and that's not how our team operates."

Kyle Larson was headed for a bad day at Darlington when engine problems caused him to lose three laps while sitting on pit road. But taking advantage of wave-arounds and track position, Larson rallied to finish 12th, leaving him in seventh place and just 21 points behind playoff leader Joey Logano.

“I think in the playoffs, you have to be extra careful about everything, for sure in this first round,” said Larson, the reigning Cup champion. “If you can get through each race somewhat safely, you should make it to the next round safely.”

This will be the earliest the fall race has been run at Kansas, and the unpredictable weather that comes with this time of year could cause problems. The high on Friday was close to 90, but a front moving in Saturday could knock temperatures down by 20 degrees and brings the threat of rain for practice and qualifying. The cool temps remain for Sunday.

“I hope the wet stuff and cooler weather doesn’t come in until Monday and it stays nice and warm,” said Ross Chastain, who is eighth in the playoff standings. “Even though everybody wants the top, if your car is better, you can move down the hill and pass. Restarts, you have a lot of options. We don’t have to spray anything on the track to make it good. We don’t have to do anything. We can just go race and in today’s world, that’s nice.”

Denny Hamlin, who is third in the playoffs standings, is the 5-to-1 favorite to win for the fourth time at Kansas, according to FanDuel Sportsbook. Kyle Busch is 6-1 and Martin Truex Jr. is 7-1. ... Christopher Bell’s win at New Hampshire is the only win by Toyota in the last 13 races. All six Toyotas finished in the top 10 at Kansas in May.