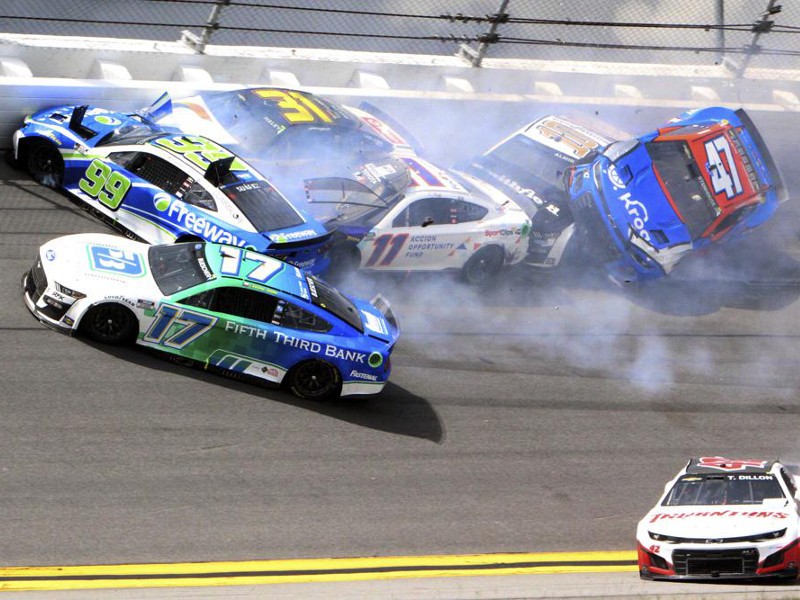 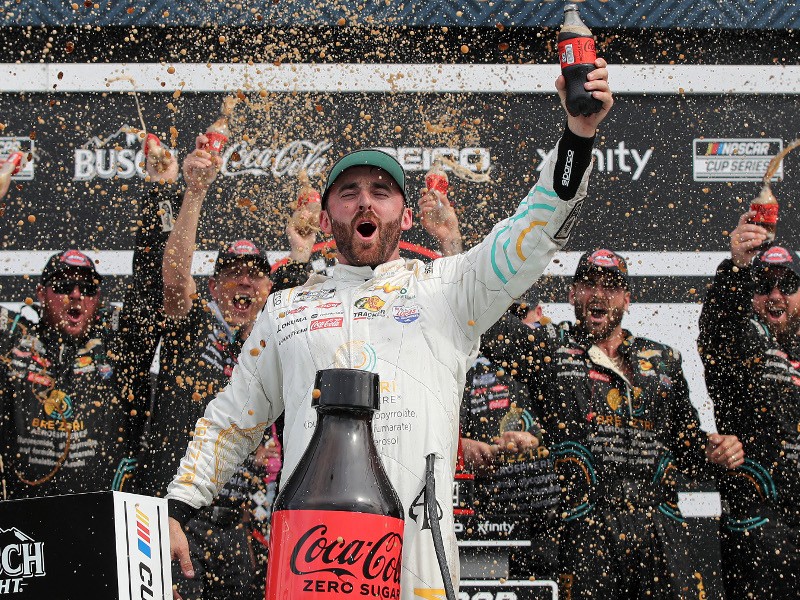 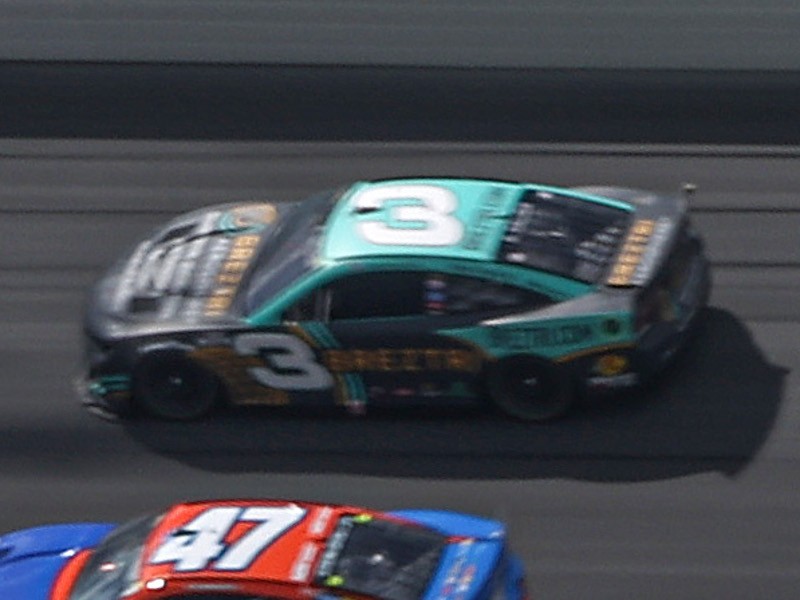 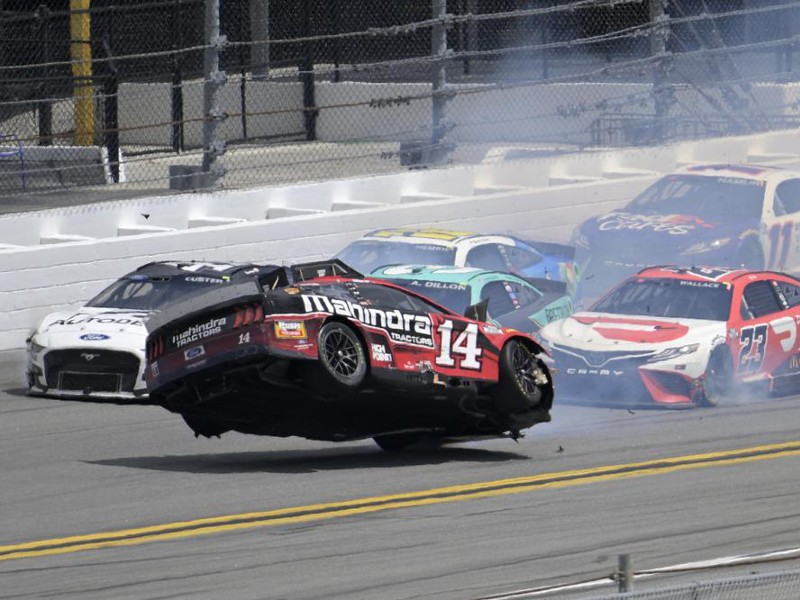 Wet weather was a factor all weekend at Daytona International Speedway, and on Sunday, it had a huge effect on the outcome of the NASCAR Cup Series race and the Playoffs.

But there was no raining on Austin Dillon’s parade.

After nearly a three and a half hour weather delay following a massive 15-car crash on lap 137 of 160, Dillon shoved leader Austin Cindric out of the way with three laps to go, and held off his teammate Tyler Reddick for the victory.

“It’s crazy. You just never give up and have faith,” said Dillon. “We had some tough finishes this year, like Charlotte. I beat myself up over that. I made a good move and just didn’t finish it off. Today we finished it off. I’m so proud of these guys and I’m glad to be going to victory lane.”

With 23 laps to go and with showers threatening, Daniel Suarez and Denny Hamlin were battling for the lead when they drove into a sudden cloud burst in the first corner, sending both drivers spinning and gathering up the entire pack of cars behind them.

Dillon was running in 16th when the crash broke out ahead of him. He drove to the inside on the apron of the track and avoided the carnage to come away with the lead off turn two.

“I had no clue it was raining from where I was,” Dillon said. “I was just enough back from where you can see my end car, and there’s some sprinkles, but I thought that was oil because the 99 (Suarez), when he kind of got turned and up in the air, I saw that. So my immediate reaction was get to the flat because I knew he was headed up the hill.”

It was Dillon’s second brush with disaster after spinning down backwards down pit road 11 laps earlier to avoid a multi-car crash. Both times, Dillon escaped major damage to his No. 3 Chevrolet.

Moments after the lap 137 crash, the race was red flagged due to lightning as rain poured over the 2.5-mile superspeedway.

With a pair of Playoff spots on the line, NASCAR was not quick to give up on getting the closing laps of the race in the books. After a three hour and 19 minute delay, the field re-fired and rolled off pit road just before 4 pm EST.

When the race resumed with 16 laps left, Cindric quickly drove to the lead. Dillon held on to the runner-up spot, and applied pressure to Cindric’s back bumper. On lap 157, Cindric’s Ford slipped after contact from Dillon. That allowed Dillon to retake the point.

“I had a big run to him (Cindric) and then I had my teammate, the 8 (Reddick), back there,” Dillon said. “I knew we were in good shape there to the end. He did a good job checking up any kind of run. Just a little too much push there and got him loose.”

From there, Dillon held off a late charge from Reddick and Cindric for the win.

It marks Dillon’s first win of the 2022 season, the second of his career at Daytona, and his fourth overall Cup series victory.

More importantly, the win moves him into the Playoffs in the final race of the regular season.

“There was a lot going on there,” Dillon said. “I knew that if we got to the white…I was afraid that if I waited too long, I was afraid somebody would wreck behind us, so I wanted to go ahead and get the lead. We were able to get it.”

Despite having a damaged race car, Reddick charged from deep in the top 10 to come home in second at the end of the day.

“Just had to fight really, really hard when everyone singled out and there weren’t many cars left at the end there and tried to get to Austin (Dillon),” said Reddick. “I knew he was going to need some allies there at the end of the race to go make the move on the 2 (Cindric). As it just kind of turned out, he didn’t really use his teammates for that move, but after everything kind of happened with the second pack catching us, I was really glad to be on his rear bumper to pretty much keep anyone from really creating that energy to pass the lead car.”

Cindric rebounded from the lap 157 shove from Dillon to finish in third.

“I got hit by another race car going 190, 200 miles an hour,” said Cindric. “I’m glad I saved it and glad I had a shot to come back through the field. He (Dillon) is racing for a playoff spot and totally expected to get drove through. It was just a matter of time. I’m pretty bummed. We had a shot to win today.”

“We ran into rain in the middle of turn one and just lost it,” said Hamlin, who finished 25th.

“Just throw the caution before the rain came,” Hamlin added when asked what NASCAR could have done differently. “We had rain down the front. So about 10 seconds before we got into turn one, it was raining. I’m sure the fans felt it and then they watched us all pile in there.”

When asked what could be done moving forward with such a situation, Hamlin said, “Better officiating, that’s all we can do. Like New Hampshire, we’ll learn from this for sure.”

Suarez went from battling for the lead to a 24th place finish.

“We knew the rain was coming…it was raining next door,” said Suarez. “It was just a matter of time. Why would we wait for that…I don’t know. Maybe I’m a little biased because I was in the front, but there’s nothing you can do. Sometimes you are running 200 mph and you’re able to turn left. And then you see a few drops hard and you’re just spinning.”

“I feel like they have a lot of technology to know that the rain is very, very close,” Suarez added. “I don’t think it’s hard to not put us in that position.”

Haley was leading on the previous restart, and had been gambling on the rain coming ending the race early before ending up finishing 28th.

“Yeah, it was raining for a good lap before we got into turn one my spotter said,” said Haley. “Coming out of (turn) two the previous lap, it was raining and we just lost traction. It’s pretty unacceptable.”

“We saw rain,” said Buescher, who ended up 27th after the crash. “Our Fifth Third Bank Mustang was really fast. Everybody did their jobs and I felt like I was doing mine fairly well up there and had a run. We were definitely in a good spot and it was raining when we got to turn one and we all wiped out. We wiped out all the lead cars, so whoever wins this race wasn’t even in contention. It’s just ridiculous from my point of view.”

Kevin Harvick was running among the leaders before the crash left him with a 20th place finish.

“Well, I think they’re making it up as they go,” said Harvick. “It’s just one of those deals.”

The two drivers battling on points to make the cut, Ryan Blaney and Martin Truex, Jr., were both gathered up in separate incidents that left their cars wounded. In the end, Truex, Jr. finished eighth, but still failed to make the cut by just a few points with Dillon scoring the win. Blaney, who soldiered home to a 15th place finish some six laps down, scored the final Playoff spot.

“After that wreck everything was kind of out of our hands and we were just trying to do the best we could to try and complete all the laps,” said Blaney. “You never know what can happen, so props to them (the team). Fortunately, we were able to gain some points there at the end and locked us in. It was definitely nerve racking, but a lot of props to the 12 team.”

“We just had too much damage at the end,” Truex said. “We had a good spot on the restart and we got a good restart. We got the 2 (Cindric) up front, which is what we were trying to do, but just couldn’t keep up. Just too much damage. It’s s shame. We knew it was going to be tough with so many cars out of the race and the distance between me and the 12 (Blaney). It was going to be hard to hang on to fourth or better with a car that torn up.”

As is the norm at Daytona, there was a myriad of multi-car crashes on the day. The first occurred on lap 30, when the car of Jones got loose while racing for the lead. That caused an accordion effect from behind that saw contact between Hamlin and Blaney, triggering a crash that gathered up Christopher Bell and Harvick. Blaney’s car received right front damage, leaving his car significantly slower for the rest of the day.

After the second segment of the race ran incident free, the race saw another multi-car crash with 58 laps left to go, when Michael McDowell’s Ford spun off the front bumper of Tyler Reddick’s Chevrolet on the backstretch as the two were drafting in the lead pack. McDowell’s car spun into the wall, gathering up Truex, Jr., Austin Cindric, Corey LaJoie, Ross Chastain and Chris Buescher in the aftermath.

Truex’s Toyota suffered damage to the right front fender, but his team was able to make repairs and keep him on the lead lap.

There was more mayhem with 35 laps to go. Chase Briscoe had just moved alongside of Joey Logano to challenge for the lead, but his car got loose as the pack raced off turn four. Contact from Alex Bowman to Briscoe’s back bumper sent Briscoe spinning through the tri-oval, gathering up the cars of Bubba Wallace, Ricky Stenhouse, Jr., Cole Custer and Harrison Burton. Dillon spun as well, traveling out of control down the pit road backwards.

Dawsonville, Georgia’s Chase Elliott was among the pack gathered up in the final crash on the day, and was credited with a 29th place finish.

The race was originally scheduled to run on Saturday night, but persistent showers in the evening led NASCAR to postpone the event to Sunday morning.