Atlanta United, Columbus settle for draw in the rain

COLUMBUS, Ohio — Atlanta United drew Columbus Crew 2-2 at Lower.com Field after a weather delay on Sunday night. A Santiago Sosa wondergoal highlighted what was a dominant first-half performance from Atlanta. The rain returned at halftime, setting up a wild second half between the two Eastern Conference teams.

Sosa opened the scoring with his first career MLS goal in the 21st minute. Caleb Wiley headed a Brooks Lennon cross back into the Atlanta midfield. The Argentinian midfielder was first to the ball, taking a touch and freezing Eloy Room with a rocket into the top corner from 25 yards out.

Atlanta believed it scored a second after Sosa headed in from a corner but the goal was waved off due to a foul committed in the box.

Columbus leveled the scoreline at 1-1 in the 66th minute through Cucho Hernández. A team move saw Kevin Molino send Luis Díaz on a run on the right side. The Costa Rican sent a ball to the edge of the Atlanta six-yard box for Hernández to curl past Rocco Ríos Novo.

Hernández snatched the lead for the hosts six minutes later. Will Sands slithered his way to the byline and put in a pass for the Colombian, who took two touches with his right foot before tucking in a shot under the bar with his left.

Juanjo Purata found an answer for Atlanta in the 77th minute. After the visitors looked dangerous all night from set pieces, Atlanta cashed in on a corner sent in by Edwin Mosquera. The 21-year-old earned his first MLS assist, as Purata headed a shot inside the far post and past Room.

Atlanta United recorded 10 shots on target on the night, the most by the team in a single game this season.

Atlanta United, Columbus settle for draw in the rain
Atlanta United drew Columbus Crew 2-2 at Lower.com Field after a weather delay on Sunday night. A Santiago Sosa wondergoal highlighted what was a dominant first-half performance from Atlanta... 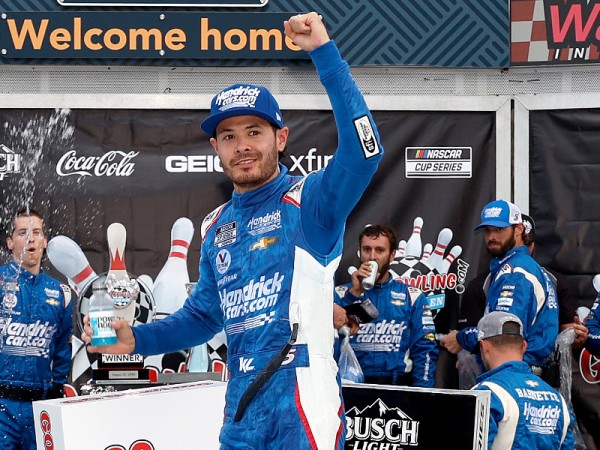 Larson elbows Elliott for Cup win at Watkins Glen
Who needs teammates? Kyle Larson shoved his teammate, Chase Elliott, out of the way in turn one on the final restart in Sunday’s NASCAR Cup Series race....
Updated

NASCAR pulls into Watkins Glen with playoff spots to fill
There are two races left in NASCAR's regular season, and Chris Buescher has only one avenue to make the playoffs — winning. His next chance comes Sunday...
Sports