By Rob Moore and Dean Dyer 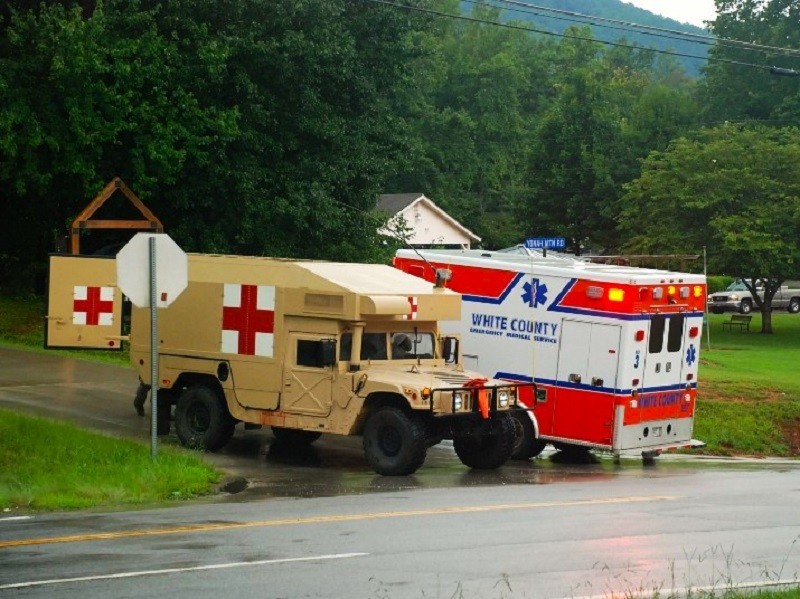 Crews transfer an injured Ranger from a military ambulance to one from White County Emergency Services.
Dean Dyer
Contact Editor

The Army has identified the two service members killed during a storm Tuesday in White County as Second Lt. Evan Fitzgibbon and Staff Sgt. George Taber.

The Maneuver Center of Excellence and Fort Benning identified the men in a statement, expressing condolences to Fitzgibbon’s and Taber’s families, friends, and colleagues..

“Fitzgibbon and Taber, along with three other Ranger candidates, were struck by a fallen tree around 3:15 p.m. while sheltering during a weather-induced training hold,” the statement reads.

All injured personnel were transported to Northeast Georgia Medical Center, where Fitzgibbon and Taber were later pronounced deceased.

Two were treated for non-life threatening injuries and one remains stable under medical care.

“We are all deeply saddened by the loss of these two outstanding soldiers and send our heartfelt condolences to their families,”  said Maneuver Center of Excellence and Fort Benning Commanding General Maj. Gen. Curtis A. Buzzard. “They are in our thoughts and prayers.”

Fitzgibbon, was an Infantry officer (11A), assigned to the Infantry Basic Officer Leader Course, 199th Leader Brigade at Fort Benning, commissioned May 22, 2021, from the United States Military Academy at West Point, NY.

“Those who volunteer to attend Ranger School represent the very best of our military,” Airborne and Ranger Training Brigade Commander Col. Christopher C. Hammonds said. “This loss resonates across our Army and across our nation.”

Two soldiers died and three others were injured in a weather-related incident Tuesday during training on a mountain in White County Tuesday. The Army Rangers training on Yonah Mountain were stationed out of Georgia's Fort Benning.

The incident happened around 3:30 p.m., and White County Fire Chief Mike Lefevre said when he arrived at the top of the mountain, “It was pretty much mass confusion at that point because there was so many people up there.”

Lefevre said as the Rangers were training, a treetop fell by an apparent gust of wind, killing two soldiers and injuring three others. The injured were transported off the mountain by Army ambulances then transferred to White County Emergency Medical Services ambulances for transport to the hospital. There has not been an update on the conditions of those who were taken to the hospital.

Don Strength, Georgia Emergency Management Agency/ Homeland Security Area 1 field coordinator, was in White County assisting on another operation, and assisted with resources and coordination for the storm response.

Strength said personnel were at Mountain Lakes Resort getting ready to conduct a search for a missing individual when the Yonah Mountain incident happened, and they all responded. Strength said they couldn’t go into the woods because of the storm, but they watched a dark cloud move over Yonah Mountain.

Yonah Mountain is located between Cleveland and Helen on Ga. 75.