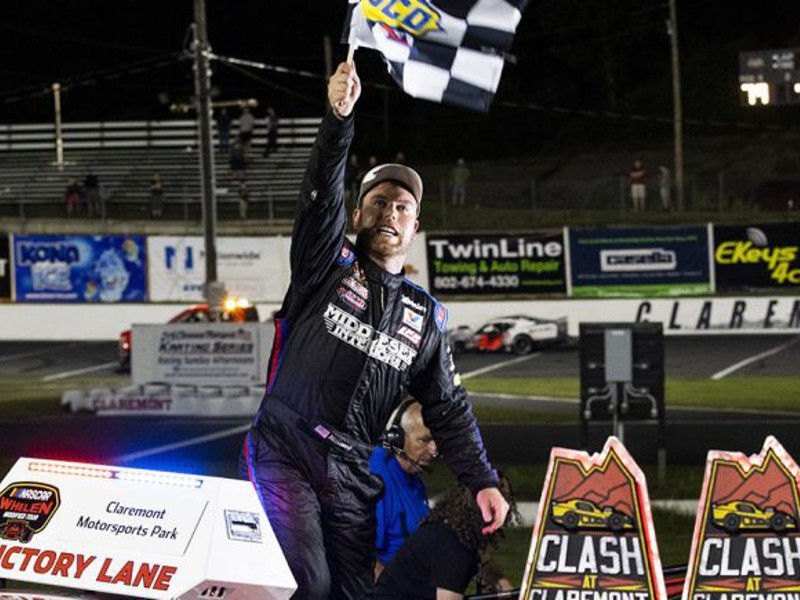 After last visiting victory lane at Myrtle Beach Speedway in 2018, McKennedy put together the most efficient performance of his NASCAR Whelen Modified Tour career to score his second Tour win at New Hampshire’s Claremont Motorsports Park.

McKennedy has worked tirelessly since his first victory in 2018 to get another NASCAR Whelen Modified Tour victory and was simultaneously thrilled and relieved to accomplish that goal in a car prepared by Tim Lepine.

“This was way overdue,” McKennedy said. “I had a really good deal with Tommy Baldwin Racing and we had so many seconds and poles with Tommy. We were always in contention, but just couldn’t get that W the last few years. We’re back (in victory lane) and it’s awesome.”

The Clash at Claremont 150 was a relatively peaceful outing for McKennedy. Once he passed rookie Jake Johnson for the lead in the opening laps, McKennedy set the pace and finished the night uncontested ahead of the rest of his competition.

Despite breaking his long dry spell, McKennedy was unable to bring home the $5,000 paycheck that came with winning the Whelen Granite State Short Track Cup.

That honor belonged to veteran Matt Hirschman, whose fourth-place finish in the race allowed him to edge out NASCAR Whelen Modified Tour championship leader Ron Silk by two points to claim the honor.

Hirschman, who has been a part-time Whelen Modified Tour competitor since 2016, was honored to bring home the inaugural Whelen Granite State Short Track Cup and said the initiative highlights the need for fans and competitors to support Modified racing in the Northeast.

“I probably wouldn’t have gone to all three races had they not been tied together with a bonus,” Hirschman said. “I remember going to Beech Ridge last year and they thanked me for coming. Stuff like that is appreciated, and I talked to my car owner (Roy Hall) about (the Granite State Short Track Cup) and he said this is something we should support.”

The Granite State Short Track Cup was far from a smooth experience for Hirschman, who saw a win in the series’ second race at Monadnock Speedway slip away late after contact with the lapped car of J.B. Fortin.

Hirschman still thinks about that near miss at Monadnock, but considers himself fortunate the outcome did not significantly hinder his chances of winning the Whelen Granite State Short Track Cup. He also expressed his gratitude to JDV Productions and the full-time NASCAR Whelen Modified Tour drivers for mostly racing him clean during the three-race series.

“I don’t think I’ve ever won a three-race series that paid that much to the champion,” Hirschman said. “This is certainly appreciated. The guys that we were contending with are in for the big prize during the whole season. Hopefully they have a good race up until the end, but we’ll join them a couple of more times.”

One of those drivers expected to contend for the championship is McKennedy, who trailed Silk by 10 points entering Friday night and is expected to trim that deficit slightly as the 2011 NASCAR Whelen Modified Tour champion finished right behind him in second.

Now that he has a win during the 2022 season, McKennedy feels confident heading into the final six races on the schedule and believes that he can overtake Silk in the standings and add a NASCAR Whelen Modified Tour championship to his resume.

“This gives us some momentum heading into the last handful of races,” McKennedy said. “We’re heading to Thompson next, which is a really great track for me. I feel really good, and we’ll be going to Thompson with a brand new car, so hopefully that’ll give us a little extra.”

Johnson followed McKennedy and Silk in the running order with a third-place finish. Kyle Bonsignore finished behind Hirschman to complete the top-five.