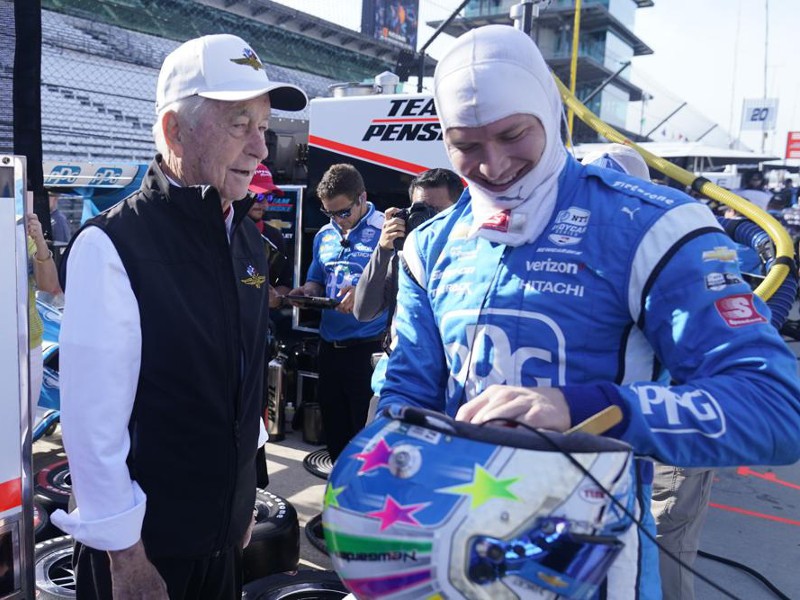 INDIANAPOLIS (AP) — Now is the time to tune into American motorsports, on display all weekend at Indianapolis Motor Speedway, where NASCAR and IndyCar intersect with both series embroiled in turmoil.

Two-time IndyCar champion Josef Newgarden was cleared to compete on the road course on Indy's hallowed grounds after successfully completing Friday morning practice and passing a third medical evaluation. The driver from Nashville collapsed and hit his head on Sunday at Iowa Speedway about 90 minutes after he'd crashed while leading the race.

He said he assumes he suffered a concussion when he hit his head in the motorhome lot but spent the first part of the week somewhat isolated in an attempt to heal so he could race Saturday. Newgarden is chasing a third title.

“I really was very motivated to be here this weekend. I knew if we weren't in this race, it was going to be very difficult to stay in this championship fight,” Newgarden said. “That was the end for me. I know that we have to be in the race, so whatever I have to do to be fit and prepared is No. 1 on my plate.”

Kurt Busch, meanwhile, will miss his second consecutive NASCAR race because of concussion-like symptoms following a crash last weekend at Pocono. Chase Elliott heads into Sunday's race as NASCAR's most recent winner, but he inherited the victory in an unprecedented disqualification to Joe Gibbs Racing teammates Denny Hamlin and Kyle Busch.

Hamlin and Busch crossed the finish line 1-2, but their Toyotas failed postrace inspection and earned the first Cup Series disqualification since April 17, 1960. Emanuel Zervakis was stripped of his victory at Wilson Speedway in North Carolina because of an oversized fuel tank.

NASCAR is still five races away from its postseason, a 10-week knockout round to crown its champion. IndyCar, meanwhile, has five races remaining in its season and an incredibly tight six-driver title race. Reigning champion Alex Palou is sixth in the standings, 44 points behind Indianapolis 500 winner Marcus Ericsson, but he's being sued by Chip Ganassi Racing over his desire to move to McLaren Racing next season.

Palou said ahead of Saturday's race that he still believes he can win a second consecutive title this year, and that he will be in the McLaren family in 2023. Team owner Chip Ganassi seemed exasperated.

“Good for him," Ganassi told The Associated Press on Friday. "I’m not making any statements. I have no quotes to give.”

Newgarden also took the silent approach until after he'd qualified fifth for Saturday's race. His hard crash while leading the race — and the IndyCar standings until a broken suspension stopped his attempt at sweeping the Iowa doubleheader — dropped him into a tie for third in the standings and forced Team Penske to put Santino Ferrucci on standby in case Newgarden couldn't drive.

IndyCar's medical staff felt certain that Newgarden had passed all critical tests before he was medically cleared in Iowa, and if he did suffer a concussion, it came later when he collapsed in the parking lot. He visited a specialist this week, was re-evaluated at IMS on Thursday and then had yet another examination after logging the second-fastest laps in Friday morning practice.

Ferrucci seemed to have already been waved off by Penske on Thursday night when he tweeted he was thankful that Newgarden was healthy. Only problem? He incorrectly spelled it “Joseph” and Newgarden didn't like that one bit.

“It’s Josef(asterisk),” he replied on Twitter. “At Penske, we care about details.”

It was an aggressive response from Newgarden, who seemed to be staking claim on both his race car and his spot in the title race. Had he not been cleared to race, it likely would have ended his championship chances.

Newgarden said his reply to Ferrucci was in good fun.

“But from a factual standpoint, you know, the details do matter,” Newgarden said. “It is important to remember here at Team Penske, we have a working style and we like to stick to it. I'm just trying to help the next batter up.”

WHAT ABOUT THE OVAL?

NASCAR last year worked with Indianapolis track owner Roger Penske to shift its race from the famed oval to the road course as part of this blockbuster weekend.

But the Brickyard 400 was considered a NASCAR crown jewel despite waning interest from its 1994 debut through 27 runnings. Penske thought the move to the road course — and a shared weekend with IndyCar — would boost the importance of the event.

The race will likely be on the road course again next year, Penske confirmed this weekend. This year's version is a 14-turn, 2.439-mile paved course.

Hendrick Motorsports dodged disaster when a generator fire was extinguished before it damaged the Chevrolet that William Byron will race Sunday.

The team sent a backup transporter from North Carolina to the speedway on Friday, one day after the flames erupted inside the No. 24 truck as it waited to enter the speedway.

“A huge thank you to everyone who helped out with the 24 hauler today including the track, NASCAR, the local fire department and other team hauler drivers," Byron wrote on Twitter. "Everyone jumped in and helped our team out today and that support means a lot to all of us on the 24 team.”

The Cup garage did not open until Friday afternoon; cars are on the track Saturday morning before the IndyCar race.

WDUN will carry live IMS Radio coverage of the NASCAR race weekend at the Indianapolis Motor Speedway, beginning with Saturday's NASCAR Xfinity Series Pennzoil 150 beginning at 3 pm on 102.9 FM and streaming live on AccessWDUN.  Coverage continues on Sunday with the NASCAR Cup Series Verizon 200 beginning at 1:30 pm on 102.9 FM, AM 550 and streaming live on AccessWDUN.