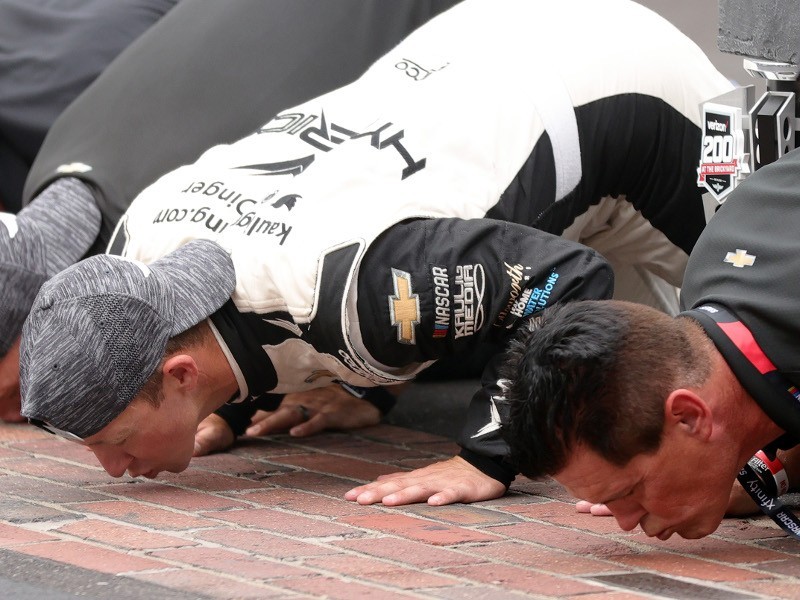 The NASCAR Cup Series makes its second foray onto the Indianapolis Motor Speedway road course, but it will be difficult to rival the chaotic proceedings of last year on Sunday.

Competing in the Cup Series in a part-time role for Kaulig Racing, A.J. Allmendinger won the debut race on the 2.439-mile, 14-turn circuit. Taking advantage of two late cautions for wild multicar wrecks, Allmendinger claimed the second Cup victory of his career.

That came after Chase Briscoe knocked Denny Hamlin out of the lead and was parked for doing so. Given the last-lap scramble involving Allmendinger, Alex Bowman and race winner Ross Chastain at Circuit of The Americas earlier this season, the action in the second race on the Indianapolis road course is likely to be as memorable.

Allmendinger is competing for the NASCAR Xfinity Series championship this season, but he’ll defend his victory — the first in the series for Kaulig Racing — in Sunday’s event.

“Being a part of Kaulig Racing’s first Cup Series win will always be so special to me,” Allmendinger said. “Heading back to Indy for the first time since then will be a surreal feeling. This is a place we have had circled on our calendar, and hopefully all the hard work will pay off.”

To score a second straight win, however, Allmendinger will have to beat surging Chase Elliott, who has won three of the last five Cup races and finished second in the other two. Elliott won last Sunday’s Cup race at Pocono after disqualifications to Hamlin and Kyle Busch, who crossed the finish line first and second.

Elliott leads all active drivers with seven road course victories. He’s third all-time behind Jeff Gordon with nine and Tony Stewart with eight, but the 2020 series champion has his own issues with the road course at Indy.

“I feel like that’s probably been one of my worst road courses, personally,” said Elliott, who finished fourth in the inaugural race. “Never really felt like I got ahold of the track last year…

“So going back, I need to do some homework this week on how to be better up there, because I do not feel very good about that track and just never got a good groove there last year at all and was never really on offense.”

If the race gives such established road course aces as Allmendinger and Elliott a chance to pad their resumes, it also presents an opportunity for drivers below the Playoff cutline.

Kevin Harvick is the first driver out of a Playoff spot, 83 points behind Truex. Realistically, Harvick and those below him in the Playoff standings will have to win one of the next five races to qualify for the postseason.

For the second straight week, Ty Gibbs will substitute for Kurt Busch in the No. 45 23XI Racing Toyota. Busch suffered concussion-like symptoms after a crash during qualifying last Saturday at Pocono and has not been cleared medically to drive.

Sunday’s race also marks the Cup Series debut of Russian driver Daniil Kvyat, who competed for Toro Rosso and Red Bull in Formula 1 from 2014 through 2020.

Full-time NASCAR Xfinity Series driver A.J. Allmendinger will try to win his third road course event of the season, having triumphed at Circuit of The Americas and Portland. The driver of the No. 16 Kaulig Racing Chevrolet was runner-up to Austin Cindric in last year’s race.

Chase Briscoe, who won the inaugural Xfinity Series race at the Indianapolis Motor Speedway road course in 2020, returns to action in the No. 07 SS Greenlight Racing Ford, which carried Cole Custer to victory at Auto Club Speedway earlier this season.

Ty Gibbs, who has been pressed into service for a second straight week in relief of Kurt Busch, got the most recent of his four 2022 victories on the Road America circuit.

“(It) was a good weekend last week at Pocono — second in the Xfinity race and then getting my first Cup start,” said Gibbs, who finished 16th in his Cup debut last Sunday.

“(It) was pretty cool, but now it’s time to focus on Indy. I do love the road courses, and obviously Indy has all the history. So excited about it, and I know we’ll have a strong Monster Energy Toyota GR Supra.”

With three victories this season, Zane Smith is the top seed for the Truck Series postseason, which will be contested in a three-round, seven-race elimination format.

The Truck Series hasn’t raced at the .686-mile paved oval since 2011, when Timothy Peters beat James Buescher to the finish line by 2.645 seconds.

As the regular season champion, Smith enters the Playoffs with a 15-point cushion over second-place Chandler Smith, who won last Saturday at Pocono. But that won’t deter Zane Smith from an aggressive approach to the postseason.

“I think you kind of have to go about it as going for wins,” Zane Smith said. “That points buffer will run out quickly. It doesn’t take much to fill up those spots, so I think we’re just going to do what we’ve been doing for the rest of the year.

“It’s worked out for us, and we’ve shown a lot of consistency, and I think that’s what you need to do in the Playoffs to get to (the Championship race at) Phoenix.”

WDUN will carry live IMS Radio coverage of the NASCAR race weekend at the Indianapolis Motor Speedway, beginning with Saturday's NASCAR Xfinity Series Pennzoil 150 beginning at 3 pm on 102.9 FM and streaming live on AccessWDUN.  Coverage continues on Sunday with the NASCAR Cup Series Verizon 200 beginning at 1:30 pm on 102.9 FM, AM 550 and streaming live on AccessWDUN.