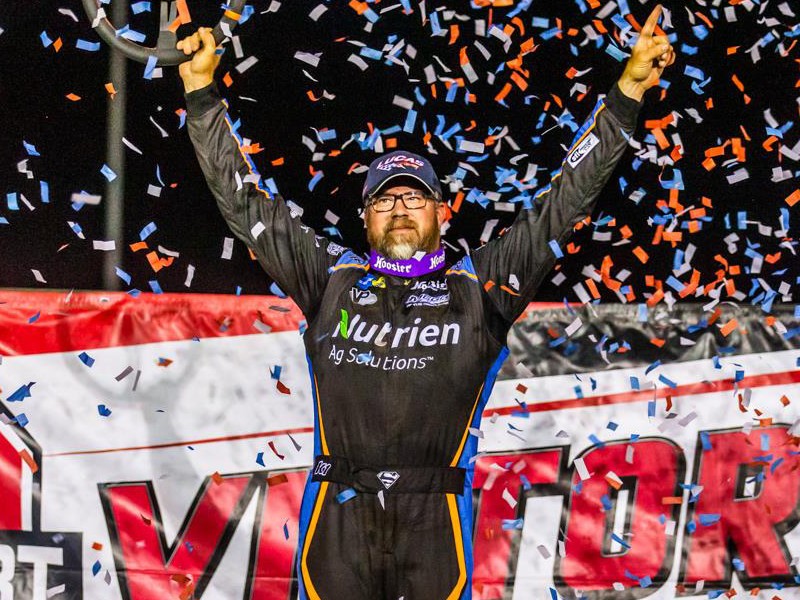 Jonathan Davenport became the first three-time winner of the Silver Dollar Nationals on Sunday night at I-80 Speedway in Greenwood, Nebraska.

Davenport charged to the lead on lap 74 around Tim McCreadie, who led the race for the first 73 circuits. Davenport pulled away to a 1.472 second advantage as the checkers fell.

McCreadie jumped to the lead from his outside front row starting spot. Behind him, Davenport moved his way forward, moving up to second by lap 62. Davenport slowly reeled in McCreadie in heavy lapped traffic. With six laps to go Davenport was able to take over the race lead which he held to the finish.

“Just him (McCreadie) getting into traffic that was it,” Davenport said after recording his 61st career series win. “I didn’t think we was that good really until we got some clean air on the nose, and I could start moving around a little bit. Once we got to third or fourth and I think Devin was on the inside of me and I could never arc the corner to come all the way down to catch the traction. Once I cleared him then I could start running about the same line McCreadie was and we started to track him down a little bit.

“Then there was lapped traffic that’s the only way we got by him. I would rather pass anybody in the pit area but him. He is one of my best buddies on the road and we share a lot of information. It’s good to see him running good and hopefully he can get this championship.”