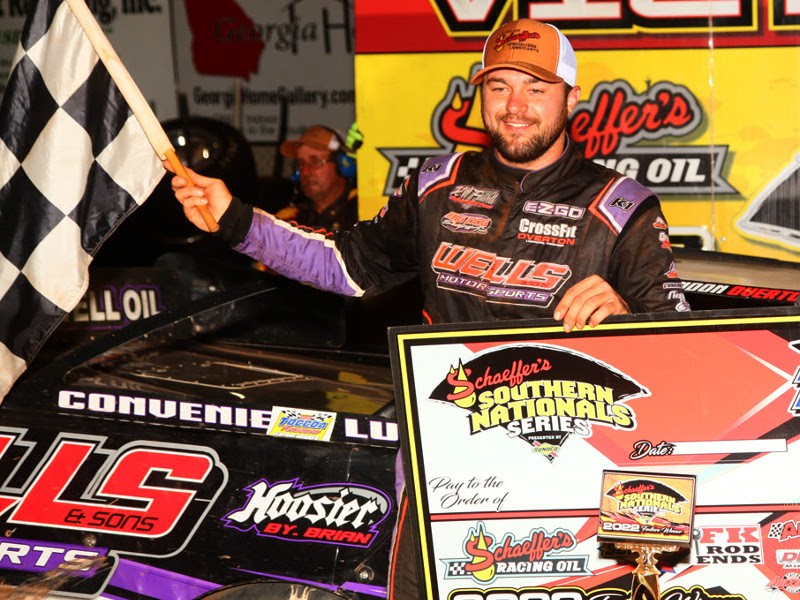 Brandon Overton ended up in the same place Tuesday night that he did four years ago when the Schaeffer’s Oil Southern Nationals Series visited Georgia’s Toccoa Raceway.

It marks his second win of the season, as he edged out second place Kenny Collins by 1.591 seconds for his 21st career series victory.

“Man, I don’t know. I didn’t get to work on my car after the heat. I knocked the whole back end off of it – messed it all up. We barely got back out here,” said Overton. “Maybe I should start trying that approach. It was pretty good. I love coming here. Wish it was a 40-lapper where we could have gotten after it and raced a little bit. Hell, it is what it is. I just love coming back home and racing, seeing all the people I grew up around.”

A slew of 11 caution flags slowed the richest race in Toccoa Raceway history. Dalton Cook slowed to draw a lap 4 yellow before John Henderson slowed on the track with right rear problems on the restart. Yet another caution flag flew on the subsequent lap 4 restart for a spinning Jensen Ford. Will Roland and Galen Robinson then tangled to draw a yellow on lap 19 prior to David Payne stopping on the racing surface on lap 27. Brenden Smith slowed with mechanical trouble on lap 46 before third-running Cla Knight suffered a flat tire on lap 57. Galen Robinson went for a spin in turn two on lap 60, while Jensen Ford slowed with a flat tire on the subsequent restart. Second-running Hedgecock suffered an untimely flat tire on lap 61 before Wil Herrington also gave up the second position on lap 62 with a similar flat tire.