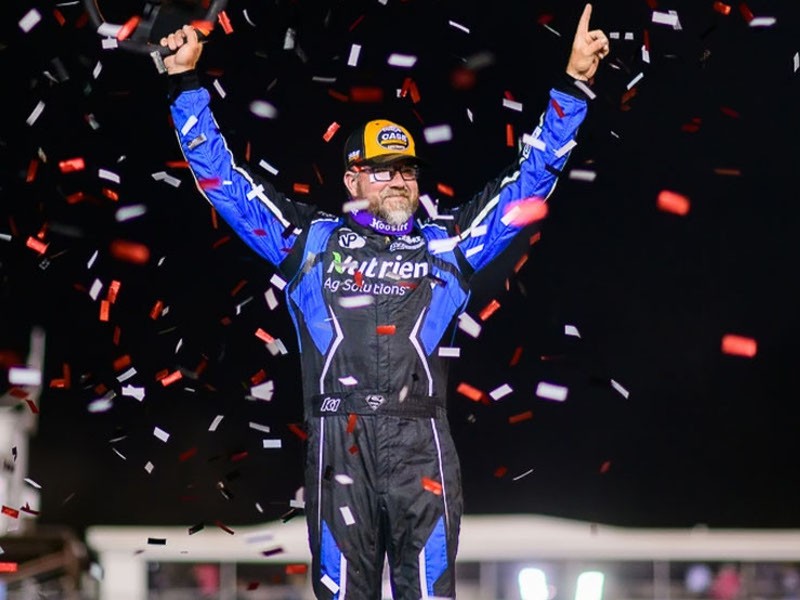 Jonathan Davenport powered to the lead on the third lap of Monday night’s Hawkeye 50 at Iowa’s Boone Speedway.

From there, the Blairsville, Georgia speedster cruised through the final 47 laps to score his third World of Outlaws CASE Late Model Series win of the season.

“The car was really, really good from where we unloaded off the trailer,” Davenport said after recording the $20,000 feature. “We just made some good, educated guesses since we couldn’t put the finger on what this place reminded us of. We were just going back and forth to three or four different tracks and trying to put everything together.

“I just was feeling the track before we took the green and that there was a little more grip up in the crumbs. There wasn’t quite a cushion, but there were some crumbs up top and some grip there.”

Davenport was surprised how quick the surface changed in just a few laps — a change leading to his pass for the lead.

“It slicked off in like one lap, it was crazy,” Davenport said. “We just happened to turn to the bottom, and (early leader Tyler Bruening) went right through that slick and about looped it.

“We were fortunate to get by him, and we just kind of cruised from there.”

The victory is Davenport’s 13th win of his series career.

Dennis Erb, Jr. finished in second, with Mike Marlar in third, Bruening in fourth, and Bobby Pierce in fifth.