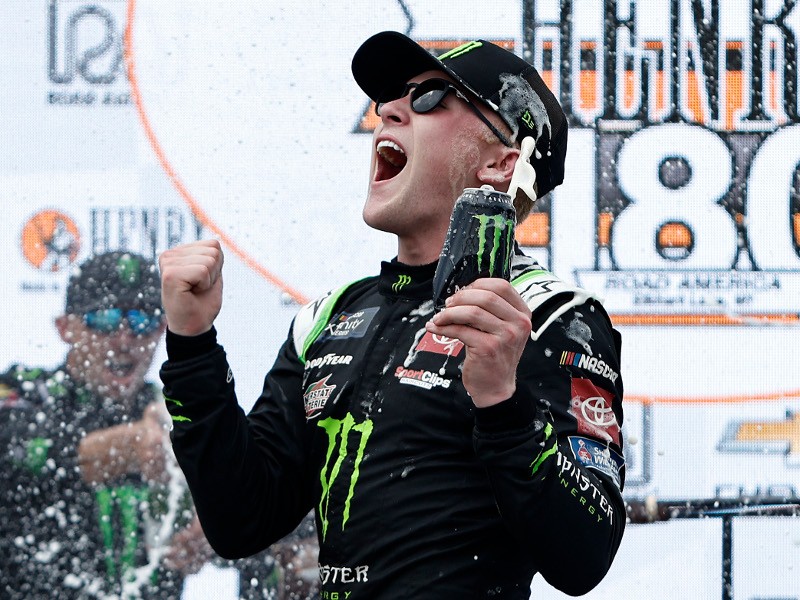 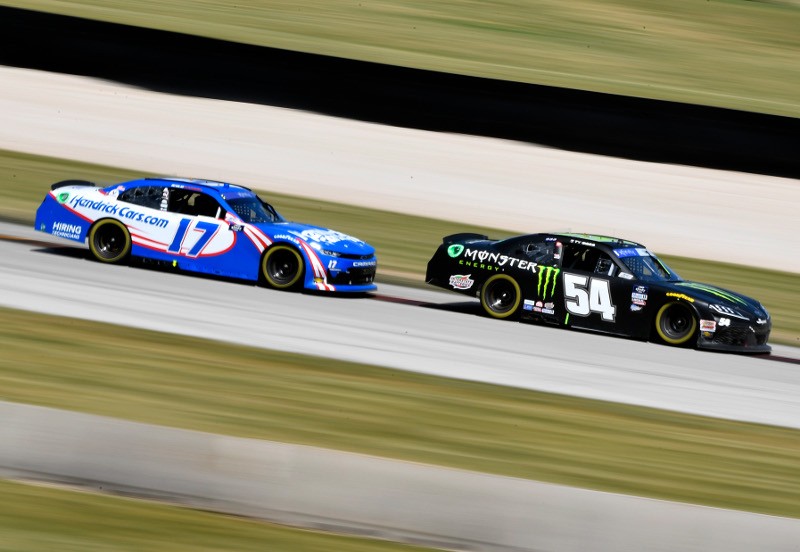 Larson took the white flag in the lead, but Gibbs had a better run down the frontstretch and dogged Larson’s No. 17 Chevrolet through turns 1 and 2. Gibbs took advantage of an opening to the inside in turn 3 and powered his No. 54 Joe Gibbs Racing Toyota past Larson for the lead and the win.

The victory was Gibbs’ first at Road America, his fourth of the season and his eighth in 34 career starts in the NASCAR Xfinity Series.

“This is just awesome,” said Gibbs, who had just beaten the reigning NASCAR Cup Series champion head-to-head. “I can’t believe it. This is just wonderful.

“I think we were a little bit faster in the first half of the track… Hopefully, a lot of people were watching. It’s cool to be here, a cool race against some Cup Series guys. Hopefully, that says something.”

Larson felt he lost momentum in the final corner (turn 14) of the next-to-last lap at the 4.048-mile road course.

“It really started with my final corner coming to the white — I didn’t get through there very good and got a little bit tight and missed my apex, was late back to the throttle, and he got a run on me down the frontstretch.

“Obviously, you have to protect the inside (in turn 1), and he just got my angles messed up in those two corners. He just did a really good job executing, and I didn’t. Bummer, but it was a really fun race all race long.”

Larson led 31 of the 48 laps to Gibbs’ five and picked up victories in the first two stages, but he gave Gibbs full marks for a clean pass for the win.

“He was able to pass me without laying a bumper on me at all. When he passed me clean, I felt like I should not use him up, like we’ve seen others do when they get passed for the lead late. He ran me clean, and I was going to run him clean. It just didn’t work out for me.”

If the decisive pass was clean, mid-pack action earlier in the race provided sharp contrast.

Contact between the Chevrolets of Noah Gragson and Sage Karam ignited a brutal 13-car crash on lap 25, and the resulting caution, the third of the race, put the contending cars on the same tire and fuel strategies.

Brandon Brown, one of the victims of the accident, climbed from his mangled car and sat against the retaining wall in turn 4, clearly in pain from the hit he had taken in the melee.

When he exited the infield care center after an evaluation, however, Brown was in much better spirits.

“I caught the dust pile,” Brown said while watching a replay of the incident. “It looks like the 45 (Karam) went around. A lot of cars went around. I couldn’t really see anything until I saw the 48 (Tyler Reddick) and plowed him.

“It was a real gut-check, a little kick to the area that you don’t want to injure.”

“That was ridiculous,” Karam said. “I’ve never been turned into on a straight line like that… You can’t get that heated when you’re driving a race car. Unfortunately, he let his emotions get the best of him today.”

Not surprisingly, Gragson had a different point of view.

“I guess he forgot the three times before that he’d throw it into the corner, door us and run us off the race track,” Gragson said. “After a while, you get sick and tired of it. I hate that people’s stuff got tore up…

“I take responsibility. I hate it for his guys, but I’m fighting to race for a championship here, and I’m really over getting run over…He started it. I finished it. We’re good.”

Another victim of that wreck, Josh Berry, survived to finish third, followed by Winston, Georgia’s Austin Hill in fourth and Atlanta, Georgia’s Brandon Jones in fifth. A.J. Allmendinger ran sixth after starting from the rear and drawing a pit road speeding penalty under caution on lap 26, forcing him to come from the back a second time.

Gibbs is the 13th different winner in 13 Xfinity Series races at Road America.