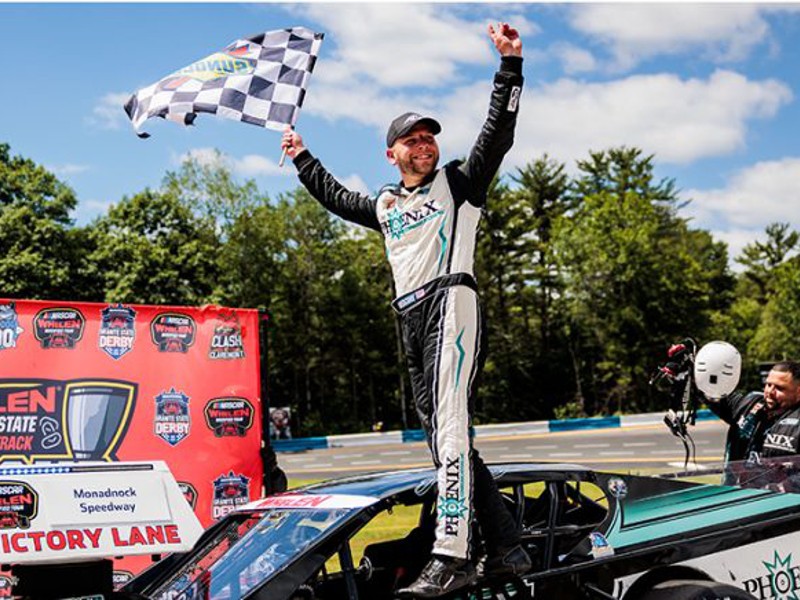 In a season filled with positives and negatives, luck was on Justin Bonsignore’s side during the closing laps of Sunday’s NASCAR Whelen Modified Tour race at Monadnock Speedway in Winchester, New Hampshire.

Contact between race leader Matt Hirschman and the lapped car of J.B. Fortin with three laps remaining created an opportunity for Bonsignore to slip past them on the bottom for his second series victory of the year.

Bonsignore was prepared to settle for a second-place finish but was stunned that Fortin essentially gifted him the victory by interfering with Hirschman.

“I’d guess you’d rather be lucky than good any day,” Bonsignore said. “Matt (and I) were neck-and-neck, but I’m not sure what’s going between (him and Fortin). I could kind of see it coming from a mile away, so I got into (turn 3), hooked the bottom and stood in the throttle for the first time all day.”

Good luck has been hard to come by for Bonsignore through the first five races.

Despite getting an early victory at Richmond Raceway, Bonsignore had not recorded another finish inside the top five prior to Saturday’s race. The mixture of poor performances and mechanical issues relegated Bonsignore to seventh in the Modified Tour standings, 37 points behind leader Ron Silk.

Mother Nature cut Bonsignore a break when persistent rain showers on Saturday evening resulted in the starting lineup being set by practice speeds. Bonsignore’s time of 12.854 allowed him to start on pole for the rescheduled race on Sunday.

Bonsignore’s lead only lasted a handful of laps before he was passed by Hirschman. With plenty of time at his disposal, Bonsignore took care of his equipment and watched as Silk chased down Hirschman to take control of the race.

Silk proved to be untouchable for most of the afternoon but admitted that his car started to fall off as the race neared its conclusion, which forced him to settle for a third place finish behind Bonsignore and Hirschman.

Like Bonsignore, Silk was puzzled by Fortin’s decision to block Hirschman and cost him the victory.

“(Fortin) just ran (Hirschman) all over the track and it looked like it was intentional,” Silk said. “It didn’t really affect my finish, which was right about where it should have been. I had a great car the whole race but I ran out of grip with about 20 laps to go. It was a good effort and we led a lot of laps, which is all you can do.”

Even though he did not get a win, Silk still managed to bolster his small points lead with Tommy Catalano and Jon McKennedy both enduring inconsistent afternoons.

Silk has yet to find Victory Lane so far in 2022 but he envisions a win coming to pass sooner rather than later with how efficient he and his team have been with six Top 10 finishes in six races.

“You never know when you’re going to have some sort of trouble,” Silk said. “We’re just going to keep doing what we’re doing, but we need to be up here racing for the lead and get top threes. I’m pretty confident going to all of these tracks and with the team that we have, we can knock off a win anywhere.”

Silk knows that consistency will be imperative over the next several weeks, as he is expecting Bonsignore to be a part of the championship conversation once the season finale at Martinsville Speedway arrives in October.

Bonsignore is not used to facing points deficits this large shortly before the halfway point of a season, but he is still confident that he can shake off the bad luck and put together performances worthy of a fourth Modified Tour title.

With one of his favorite tracks in Riverhead Raceway next up on the schedule, Bonsignore is ready to start his turnaround when the next green flag flies.

“It’s good to get back (to Victory Lane),” Bonsignore said. “We were going to have a good run either way, but this is what you have to do to win these races. We’ve really been struggling these past few weeks and I’m just happy to finish on the lead lap. Sure enough, we won as well.”

Sam Rameau finished in fourth, with Doug Coby in fifth.

The NASCAR Whelen Modified Tour will be back at the track on Saturday, June 12 at New York’s Riverhead Raceway.