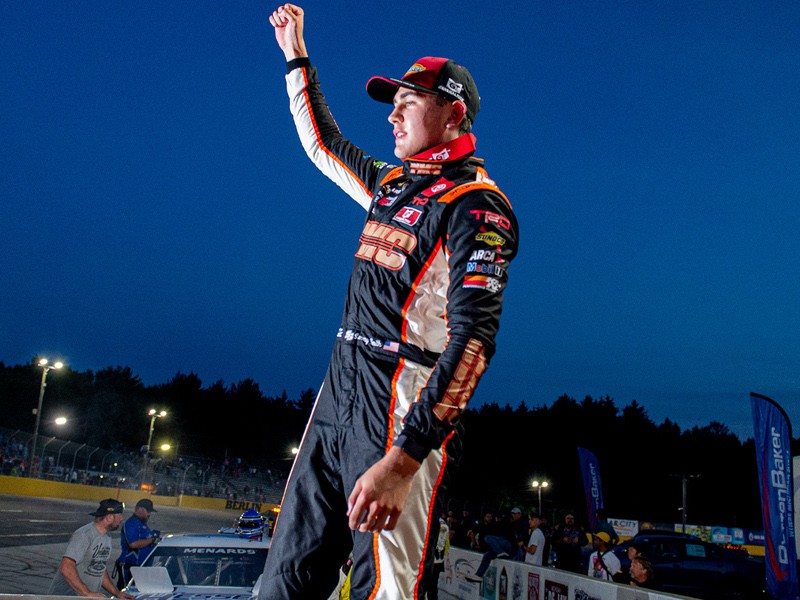 MARNE, Mich. – With 10 laps left, it appeared as though Sammy Smith would have to settle for second during the ARCA Menards Series race Saturday at Berlin Raceway.

Then, in the blink of an eye, everything changed.

Race-long leader Daniel Dye suddenly slowed with a mechanical problem with seven laps left, allowing Smith to chase down and pass him to take the lead.

Smith would lead the final half dozen laps aboard the No. 18 Kyle Busch Motorsports Toyota to earn his first ARCA Menards Series victory in his sixth series start. Saturday’s race was also a part of the Sioux Chief Showdown.

“That sucks for them. They deserved to win that one. We got lucky today,” Smith said. “Some days it’s better to be lucky than good.”

Smith had raced inside the top-five throughout the evening, but admitted that he had nothing for the dominant Dye until the No. 43 GMS Racing Chevrolet suddenly slowed in the final laps.

“We weren’t the best car today and I feel like we need to get better,” Smith said. “We’ll continue to work hard and move on to Elko.”

Dye, the defending race winner at Berlin Raceway, started from the pole and was the class of the field all night. He was never seriously challenged while leading and appeared well on his way to his second-straight Berlin Raceway ARCA victory.

That is until he slowed dramatically less than 10 laps from the finish, opening the door for Smith to earn his maiden ARCA victory.

“Not quite sure (what happened),” said Dye, who faded to seventh by the time the checkered flag waved. “I know we had a great race car. GMS just did really, really good in bringing me a good race car and we led every lap until we didn’t.

“That’s part of it man. I’m just proud to be a part of this organization.”

Hessert had resigned himself to finishing third until Dye’s late-race issues, which opened the door for him to earn a surprise runner-up finish.

“I was kind of saying, ‘Hey, we’re going to finish third,’” Hessert said. Then they (his crew) said, ‘Hey, get going there is something wrong with the 43.’ So we got up there to second.”