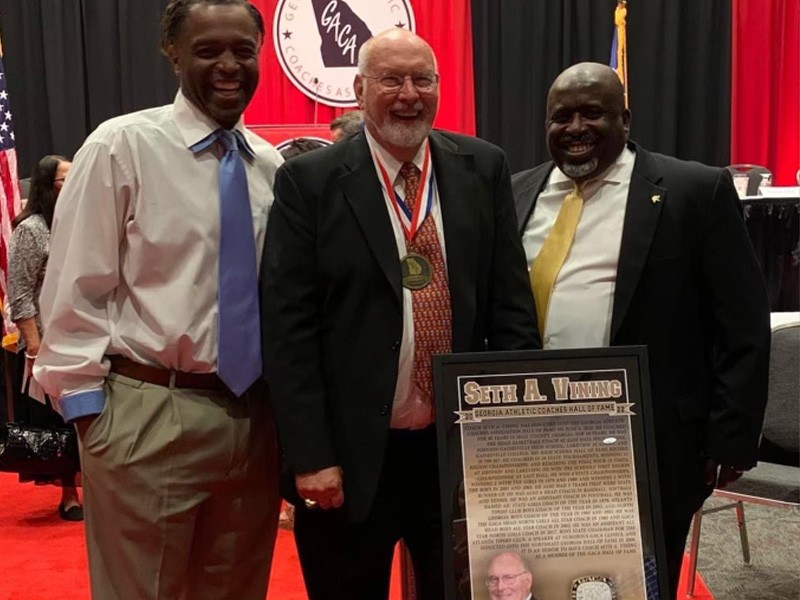 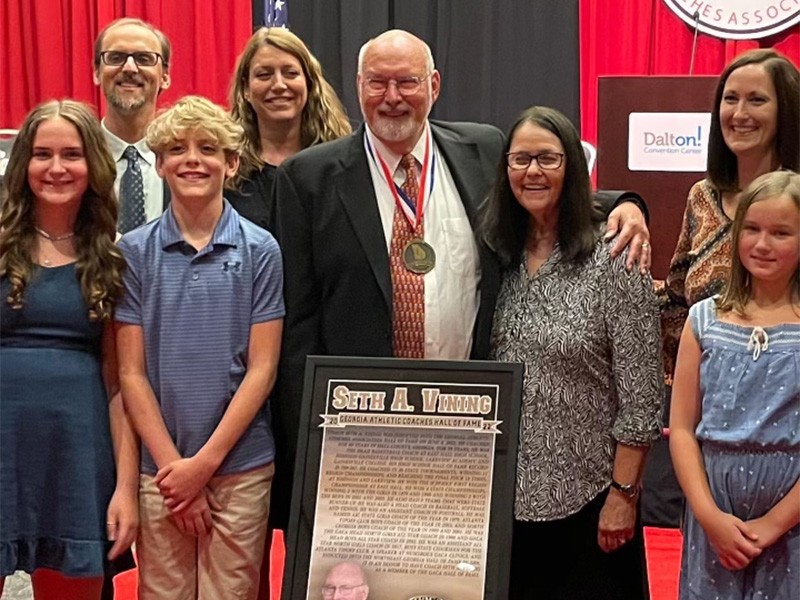 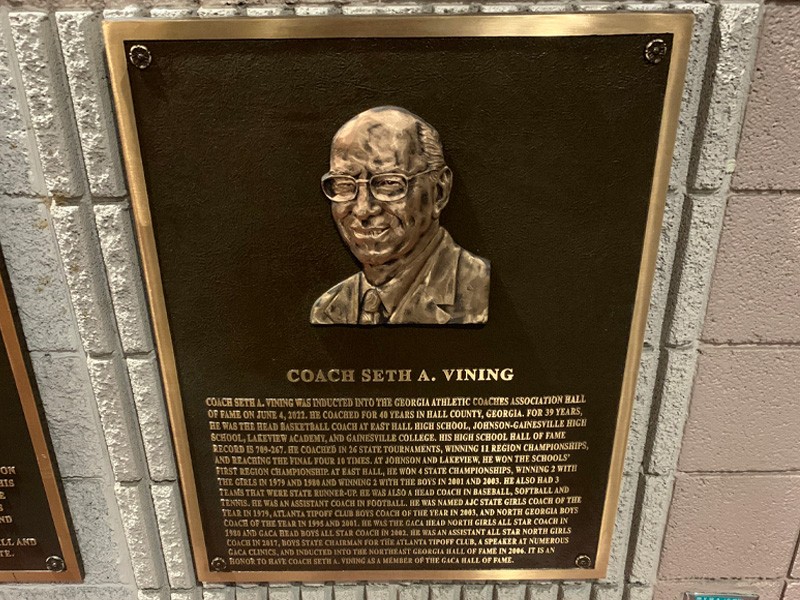 DALTON — It almost begs the question, “what took so long?”

But no matter how or why on that question, former East Hall basketball coach Seth Vining is now an official Hall of Famer.

Vining was inducted into the Georgia Athletic Coaches Association (GACA) Hall of Fame in a ceremony at the Dalton Convention Center on Saturday after nearly 40 years at three different Hall County schools and a brief stint at Gainesville College.

“It seemed like an easy decision to me,” said current East Hall coach Joe Dix, a former Vining assistant and current member of the GACA Hall of Fame voting committee.

Dix also got to present the award to his longtime mentor, who was voted in back in November.

“He is very deserving and it was a very emotional moment for me to be able to give him that award,” Dix said. “There are a lot of coaches on the list still that should be in so this is just a huge, huge deal to be voted in.”

“It’s just been a very humbling experience overall,” Vining said. “When you see the names (in the Hall of Fame) and then realize how many great coaches that are still out there that aren’t in it, it’s just humbling and you realize how lucky you are and then how many people helped get you here. Also, just so many great players that make you look good.

“The best part, and there were a lot of great parts to the whole thing, was my wife Cathy being here and having Joe present the award to me. I wouldn’t be here without Cathy and all of her support. She is the best coach’s wife in the world.

“They ask you who you want to present to you and Joe immediately was the guy I wanted because we have been such great friends and he was instrumental in helping build East Hall into what we were able to accomplish. It was a very special moment to have him do that.”

“It was a tremendous honor to be asked by Coach Vining to do that,” Dix said. “Our relationship is a special one and it was just so much fun to be involved and give him that award."

Vining had been nominated back in 2017 and, according to GACA Hall of Fame Event Coordinator Bobby McAllister, seemed a shoo-in to get in on his first attempt.

“I think he would have gotten in back in 2020 but he went back to being an active coach so we had to wait for him to retire again,” McAllister said.

Vining began his Georgia coaching career as a football and baseball assistants at East Hall in 1975 and the next year took over the Lady Vikings program. He got them into their first-ever state playoffs in 1978 and then captured back-to-back Class 2A state titles in 1979 and 1980 and finished as state runners-up in 1981.

In 1982, he jumped to the college ranks taking a job at Gainesville College and stayed there until returning to the high school ranks at Johnson in 1985. At Johnson, he led the Johnson boys to their first-ever region title in 1986 and then moved over to the Lady Knights program in 1987. He stayed in Oakwood until returning to East Hall in 1990 to take over the Vikings program from Cassell.

It was with the East Hall boys where Vining, and Dix, who joined his staff in the mid-1990s, put the program on the state and national map. However, his first two years following Cassell, who had won eight straight region titles and made the playoffs nine consecutive seasons, left many with doubts.

“We didn’t win the region and we didn’t make the playoffs my first two years,” Vining said. “I’m sure there were some rumblings about that. But after that, we really started to get things going the way we wanted.”

From 1993 to 2004, East Hall had one of the great runs in Georgia history. The Vikings advanced to the playoffs every season, winning state titles in 2001 (Class 2A) and 2003 (Class 3A) with state runner-up finishes in 2000 and 2004 and three other Final Four appearances. For those counting, that's seven Final Fours, four championship games appearances, and two titles in a 12-year span.

“Those were some great teams and we had a lot of great players. That helps a lot,” Vining said.

In what seemed a stunning move at the time, Vining left the Vikings to take the Lakeview Academy boys position in 2004. But Vining said at the time he did that to open the path for Dix to take over, who promptly guided the Vikings to the Class 2A title in 2005.

With the Lions, Vining led Lakeview to its first-ever region title as well. They also made the playoffs seven of his eight seasons after just one playoff appearance in their history to that point.

While there was no real media coverage of the event, McAllister said Vining may have had the most support of any of the inductees.

“It almost was like another recognition of East Hall basketball. Just a great, great night for all of us.

“The run of winning seasons and success with Coach was a lot of fun. This was right up there.”