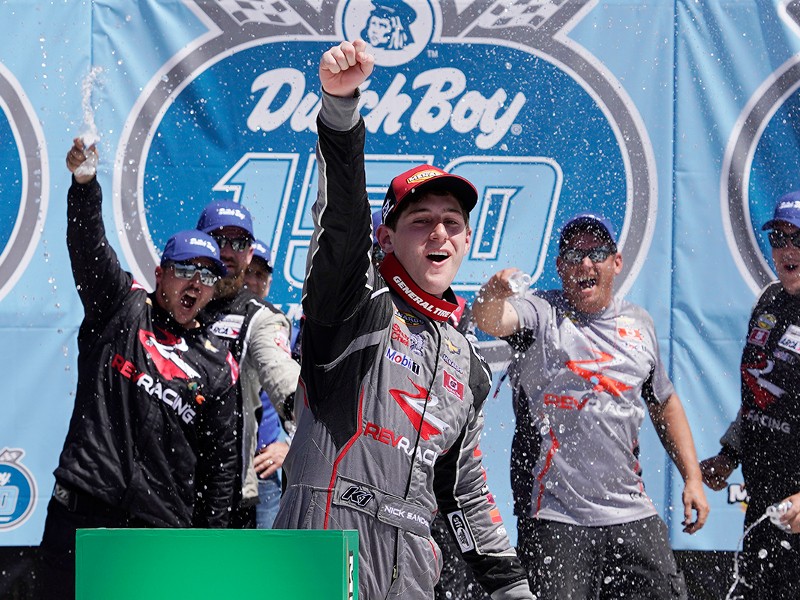 After picking up his first ARCA Menards Series victory at the track last October, Sanchez took advantage of a late-race accident between Corey Heim and Drew Dollar to score his second win in the Dutch Boy 150 at Kansas and the third of his career.

Sanchez wanted an opportunity to battle both Heim and Dollar for the victory, but he was content on inheriting the lead and managing his equipment while teammate Rajah Caruth tried to chase him down in the final laps.

“Honestly, we were trying to maintain and not burn any of our stuff up in case there was a caution,” Sanchez said. “We lucked out with what happened between (Heim and Dollar), and we possibly could have beaten both of them at the end on speed, but we ended up winning, so I’m happy.”

Keeping the top spot for Sanchez came down to holding his line on the track and making sure Caruth did not get an opportunity at utilizing clean air.

Caruth managed to chase down Sanchez twice inside of ten laps remaining but ultimately could not get the run he needed to overtake his teammate and had to settle for second, his best run in the main ARCA division to date.

Although he was frustrated over not being able to give Sanchez a proper challenge for the win, Caruth was thrilled to help Rev Racing bring home a 1-2 finish and knows that elusive first victory is coming soon.

“I can’t thank everybody enough on this Rev Racing team,” Caruth said. “They’ve worked really hard over the past couple of weeks. It sucks to finish second, but you can’t do much when we’re all wide open on the top there. I felt like I had the best car on the long run but once we all went to top, it was really hard to pass.”

Both Caruth and Sanchez got a great view of what proved to be the major turning point in the race shortly after the halfway break.

After leading every lap up to that point, Heim’s stellar afternoon came to an end when an aggressive move by Dollar to pull alongside him in turn 4 resulted in both cars making significant contact with the outside wall.

Heim was disappointed to see a victory end with contact from Dollar, but he plans to move forward from Kansas and focus on his upcoming starts with Venturini Motorsports.

“I gave (Dollar) plenty of room I thought,” Heim said. “I race Drew with a lot of respect and he’s a close friend of mine. It just looked like he lost it but that’s part of it. I don’t think he did it on purpose and he’s trying to go for the win, so it is what it is.”

Dollar, whose day ended a few laps later after cutting down a right front tire, was remorseful over the move that took both him and Heim out of the race and hopes that they can move forward without any hard feelings.

“I made a mistake,” Dollar said. “It’s tough when someone is on your outside and you get loose. Obviously, this is a racing deal and I ruined Corey’s day. I’ve got a lot of respect for him, and I do apologize.”

Without Heim or Dollar to contend with during the final 30 laps, Sanchez continued a recent streak of success that saw him nab a victory at Talladega Superspeedway following a last lap pass.

Sanchez hopes that the momentum continues over the rest of the ARCA season but knows the same strategy that has yielded success for him at Kansas will be imperative to hold off Caruth for a shot at the championship.

“You have to be mistake-free,” Sanchez said. “Rajah did not make any mistakes. Corey and Drew did not make many mistakes. It was all about restarts and clean air. We didn’t lose spots on the restarts, but I felt that with one more restart with (Heim and Dollar) in the race, we would have gotten them.”

Daniel Dye, who was reinstated by ARCA on Friday afternoon following a brief suspension, brought home a third-place finish. Gus Dean followed in fourth, with Connor Mosack in fifth.