Logano bumps Byron out of the way for Darlington win 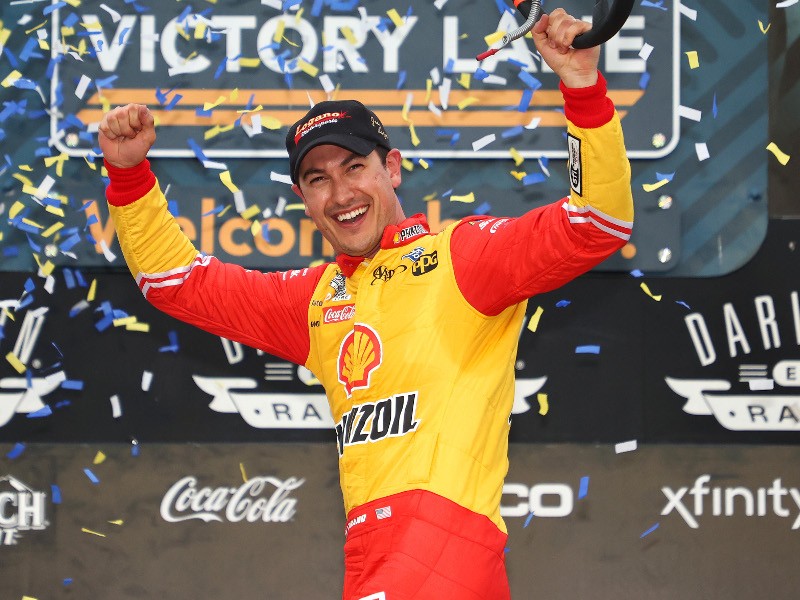 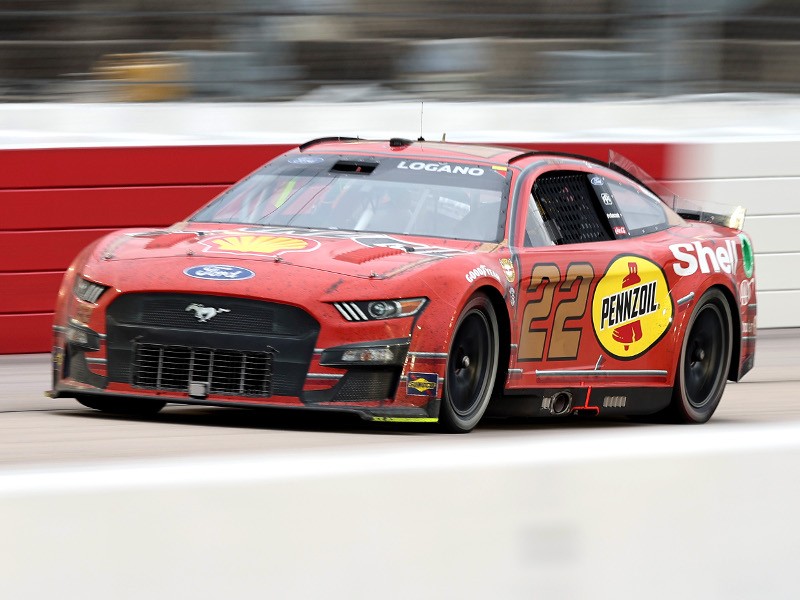 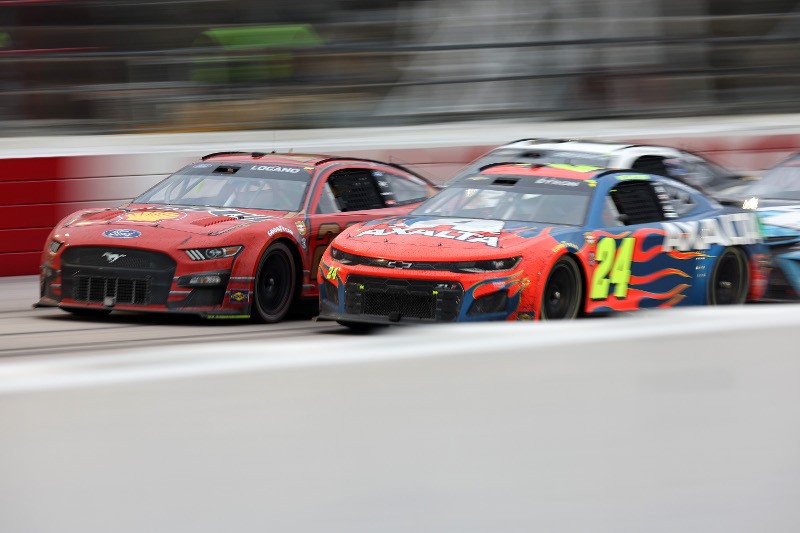 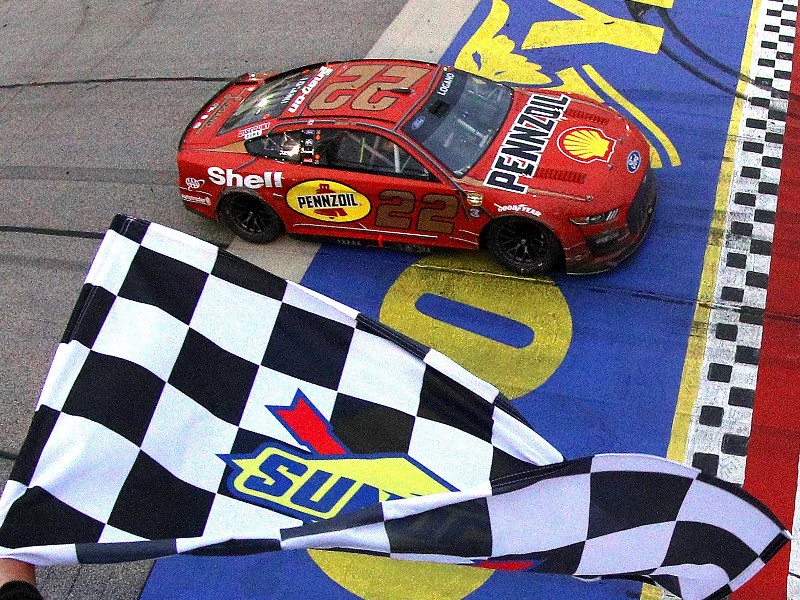 Joey Logano was channeling the spirits of some of NASCAR’s rough and tumble legends on Sunday at Darlington Raceway.

Logano got to William Byron’s back bumper with less than two laps to go in the NASCAR Cup Series race during NASCAR’s Throwback Weekend at Darlington Raceway.

That was all Logano needed, as he gave Byron’s car a shove going into the third turn, sending Byron’s car sliding up into the outside wall.

Logano took the lead, and drove away on the final lap to score the win at the track called “Too Tough To Tame.”

The win came Logano sporting with a livery on his No. 22 Ford Mustang in tribute to his first Quarter Midget racer.

“It’s so cool to win in this car,” said Logano, who started the race from the pole. “This is my first quarter midget. This is the beginning and to see it in victory lane, I’m just so proud.”

The bump and run move seemed to be a bit of payback for Logano. Earlier in the run, Byron pinched Logano’s Ford into the outside wall on a restart with 26 laps to go while racing for the lead. That allowed Byron to take the point, and put him in position to take the victory.

But over the final laps, Logano began to close the gap on the leader, setting up the final shove to Byron’s back bumper for the win.

“I don’t know if he meant to get into me and fence me, but he did and at that point I felt like it was game on and was able to get back to him there the last few laps, pushing really hard, and just knew that was my shot to win the thing and I had to take it,” said Logano. “Man, I’m so proud of this team.”

It marks the first points paying win of the season for Logano, who won the non-points Busch Clash in the pre-season, and his 28th career series victory. The win comes after a pair of disappointing finishes at Talladega and Dover.

“Such a huge recovery,” Logano said. “Last week was the lowest of lows and the week before that we wrecked at Talladega, so to come out of here and get the pole, get a stage win and then ultimately win the race at the end, I couldn’t be more excited about what we just did. The guys did an amazing job back here. The pit crew was great. The pit stall helped a lot. I tell you, winning at Darlington means so much. This is one that’s come very close to me a few times and have never been able to get it done, so proud to get it.”

Byron would limp home to a 13th place finish, and didn’t feel the move off turn two warranted the bump and run at the end.

“No, I mean, we were really close off of (turn) two and I think it spooked him and got him tight, and he was right against the wall and I got the lead,” said Byron. “He does this stuff all the time. I’ve seen it with other guys. He drove in there 10 mph too fast, and with these Next Gen cars, he slammed me so hard it knocked the whole right side off the car and there was no way to make the corner.

“He can’t win a race, so it does it that way. I don’t know. It was close racing on the restart. We were faster than him. Obviously at the end, the right rear started to go away, and yeah, he didn’t even make it a contest.”

Tyler Reddick, who used pit strategy to put him in position to possibly make his first trip to victory lane, came home with a second place finish.

“Yeah, Darlington is fun. It’s a frustrating place,” said Reddick. “You let your guard down for one second and your whole day can change. It’s one of the most difficult tracks that we go to, especially trying to manage the dirty air, trying to manage your right side and not tearing it off. A lot of options when you go into each corner here, so it makes it really fun, but also pretty frustrating until you figure it out.”

Justin Haley turned some heads by coming home with a third place finish.

“This isn’t the best car we’ve brought to the race track unloading after practice,” Haley said. “But we just kept after it all day. Some great strategy from this No. 31 LeafFilter Gutter Protection Chevy team. We had a good restart there at the end and we just kind of hung on. We didn’t have a fourth-place car, but it’s a great finish.”

Harvick finished in fourth, while Dawsonville, Georgia’s Chase Elliott rebounded from a spin after his final green flag pit stop to finish in fifth.

While it was a banner day for Logano, it was tough on several of the other pre-race favorites.

The biggest moment of the day came with 33 laps to go, when third place Martin Truex, Jr. spun on a restart off turn two while racing three-wide with Kevin Harvick and Stenhouse, Jr. Truex’s spinning car left Bubba Wallace, Kurt Busch, and Cole Custer with nowhere to go on the narrow race track, as all three spun down and made hard contact with the inside wall.

It was another disappointing day for Hamlin, who had moved from the back of the pack on the start up to lead the race.

But a problem on a pit stop with 39 laps to go put Hamlin back in the pack, where he was gathered up in the multi-car crash triggered when Truex spun. Hamlin had to settle for a 21st place finish.

Another early favorite that had issues was Ross Chastain, who won the second segment of the race. While racing for the lead on a restart with Hamlin on lap 195, Chastain’s Chevy spun off turn two, hitting the inside wall head on, ending his day with a 30th place finish.

“We were fighting the balance all day,” said Chastain. “We were racing with those guys for the lead. I just thought I could run the bottom there off of turn two and the exit of the patch. I just got loose on the transition and spun out.”

Another pre-race favorite, Kyle Busch, saw his day go south on lap 167 when Brad Keselowski cut a tire, sending his Ford into the wall and gathering up Busch in the process. Busch’s Toyota was sidelined with suspension damage, leaving him credited with a 33rd place result.

“Just the 6 (Brad Keselowski) blew a right-front tire coming off of turn two,” said Busch. “I had nowhere to go and just got collected up in something not of our doing. It’s frustrating.”

Kyle Larson led the opening lap of the race, and held the point for the first eight laps. The defending series champion was racing with Kyle Busch for second position when his Chevrolet spun on lap 55 in turn three.

After working his way back into the top 10, Larson’s race came to an end on lap 113 with engine failure, relegating him to a 36th place finish.