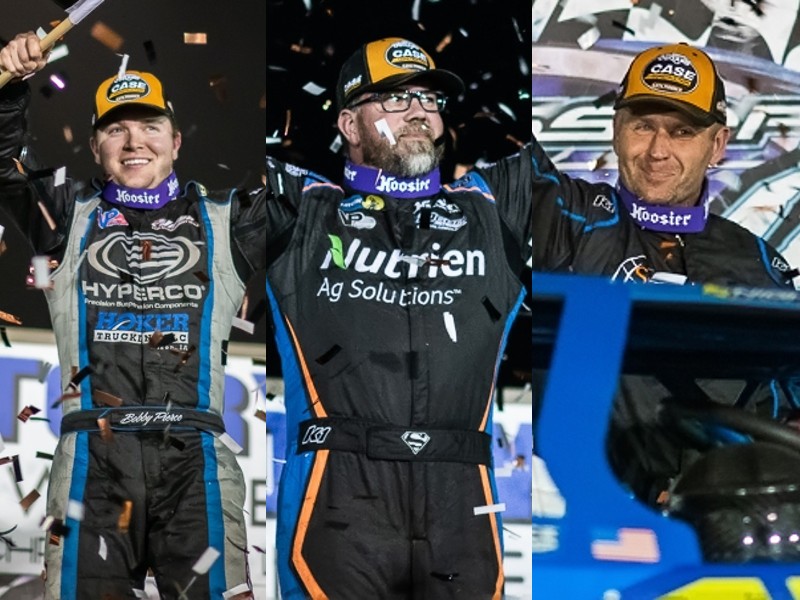 Bobby Pierce, Jonathan Davenport, and Mike Marlar all carried home winner’s trophies from the Badger State over the weekend.

On Thursday night, Bobby Pierce led every lap from the pole en route to the opening night win and a $10,000 payday.

On the opening lap, the Oakwood, Illinois driver drove away from the field, and remained unchallenged until a lap 21 restart, when Stormy Scott got underneath him.

Bobby Pierce had one worry before Thursday night’s World of Outlaws CASE Construction Equipment Late Model Series Feature. He feared his pole position might not be the best place to start at Mississippi Thunder Speedway.

But Pierce held him at bay and went on to record his third career series victory.

“Starting first is sometimes not the best,” Pierce said. “It almost got us there because (Stormy Scott) started to show me the bottom, and I really didn’t feel great down there. I saw Stormy show his nose, and I was like, well, I guess I better block, but the top was still pretty good.

“When I moved down, I actually started pulling away from him, I guess, so all in all, it was pretty good I moved down.”

Scott finished in second, with Mike Marlar in third, Cade Dillard in fourth, and Tyler Bruening in fifth.

On Friday night, Jonathan Davenport spent the first half of the race searching for the right line around the 1/3-mile dirt track.

Once he found it, the Blairsville, Georgia driver was unstoppable over the final 20 laps. Davenport rolled past Tyler Erb with seven laps remaining and went on to score the $10,000 victory.

“I kind of ran around the bottom at first and kind of conserved tires for a little bit, trying not to blister them too early,” Davenport said. “(Track crews) went and farmed the racetrack, and they did a really good job.

“It was pretty racy, so we just tried not to overheat our tires, to begin with, and once some people did, they started getting loose getting in the corner, and I could get by a couple on the bottom, then I moved to the top and got by one or two more. I just got some runs, and for me, there weren’t any cautions, so everyone was still searching.”

It makes the second series win of the season for Davenport, and the 12th of his career.

On Saturday night, Mike Marlar was in second with seven laps to go when heartbreak struck race leader Tyler Bruening.

As Bruening caught the tail of the field, he tangled with Lance Mathees, sending them both spinning in turn 2.

Marlar inherited the lead from Bruening and held on to win the $50,000 prize in the Dairyland Showdown finale.

The Winfield, Tennessee driver admitted luck played into the race’s outcome, being in a position to strike after he passed Erb back with 16 laps to go.

“(The win) fell back in my lap. I definitely got lucky to end up winning it,” Marlar said. “I hate it for Tyler Bruening, he definitely was deserving of the win there, and it just didn’t work out for him.

“Hopefully, if he stays after it and keeps working hard, he’s definitely going to get some (wins).”

The Dairyland Showdown victory is Marlar’s 10th career series win and first of 2022.

The World of Outlaws Case Late Model Series makes their first Northeast swing of the season with a three-race weekend in Pennsylvania. The Series visits Bloomsburg Fair Raceway on Thursday, May 19, Marion Center Raceway on Friday, May 20, and Port Royal Speedway on Saturday, May 21.