Hamlin hopes to put persistent miscues behind him 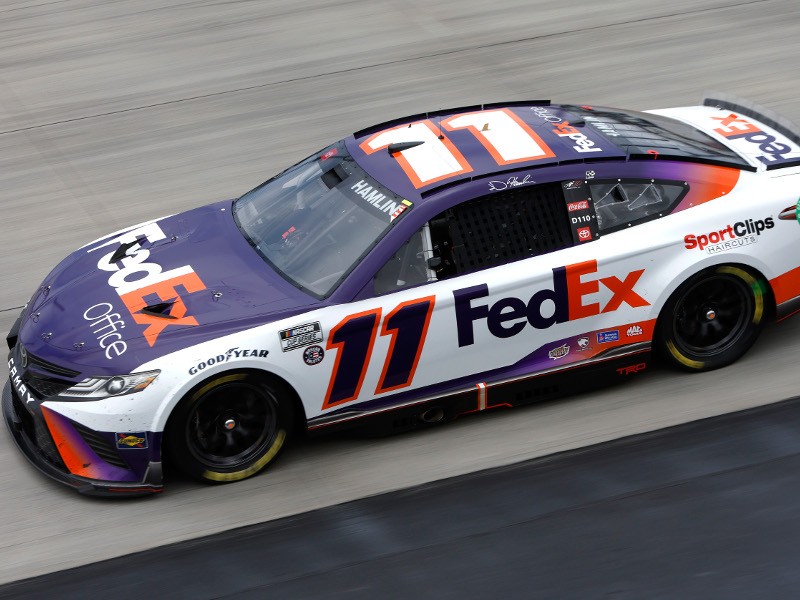 With the exception of one race — a welcome victory at Richmond Raceway — Denny Hamlin and his No. 11 Joe Gibbs Racing team have been agonizingly consistent this season.

The very embodiment of Murphy’s Law, Hamlin and his team have found a wide variety of ways to spoil promising NASCAR Cup Series runs.

“It’s been frustrating,” said Hamlin, who is the leading active winner at Darlington with four victories coming into this weekend’s Goodyear 400 at the ‘Track Too Tough To Tame’. “I mean, honestly, it’s just been, you know, week after week of being the coyote that gets the anvil dropped on its head.”

Last week at Dover, a tire fell of Hamlin’s car as he left pit road because the tire changer’s gun had inadvertently ejected the single lug in use in the Cup Series this year. Hamlin finished 21st, a lap down. Even with the Richmond win, his average finish this season is 22.5 through 11 races, and he’s 23rd in the Cup standings.

“We’ve had things that just have broken,” Hamlin said. “I’ve had more mechanical failures this year than I’ve ever had. Again, you know, some of these parts that we don’t control, and NASCAR is continuing to change them and develop them to make them better so we don’t have a lot of problems, but we’ve just been kind of the poster child of the ones that break things.

“It’s been unfortunate, but I can tell you it’s a lot different than running top-10 every week and trying to figure out how you’re going to get enough speed to win. That’s what I’d really like to be worried about.”

Earlier this week, Hendrick backed up his words with action, signing 24-year-old William Byron to a three-year contract extension that will keep him with the organization at least through 2025.

Byron and Trackhouse Racing’s Ross Chastain are the only two drivers in the series with two victories so far this season.

Chase Elliott, the 2020 NASCAR Cup Series champion, said he was happy to have Byron in the fold for the next few years. Elliott is signed with Hendrick through 2027. Teammates Kyle Larson, the reigning series champion, and Alex Bowman are signed through the 2023 season.

All four Hendrick drivers have at least one victory in the first 11 races this year and are all but assured of qualifying for the Cup Series Playoff.

“I think it’s great,” Elliott said of Byron’s extension. “Those three guys deserve their opportunities in my eyes, and I think they’ve done a great job. They’ve had a lot of success and have run really well over the course of the last couple of years.

“So yeah, I think it’s a great thing. When a guy or a girl is deserving of an opportunity, and they’re able to achieve that and have one presented to them in a manner like all of our guys have, I think it says a lot about them. I think HMS is in a really solid place right now.

“I feel like we all work pretty well together. It’s just kind of an easy flowing operation, which is good. I think it’s a great thing. I’m happy for William, and in light of his news this week, I think he’s very deserving. I look forward to racing with him and working with him over the next few years, too.”

Traditionally, the reigning NASCAR Cup Series champion is included in the Voting Panel for the NASCAR Hall of Fame, but Kyle Larson had an important conflict that prevented him from participating this past Wednesday.

As the winner of the 2021 Coca-Cola 600, Larson — along with Hendrick Motorsports vice chairman Jeff Gordon — flew to Washington, D.C., to lay a wreath at the tomb of the unknown soldier in Arlington National Cemetery.

The honor is part of Charlotte Motor Speedway’s Mission 600, whose purpose is to honor military men and women. The focal point is the Coca-Cola 600 on Memorial Day weekend.

“It was a cool experience, for sure,” Larson said of the trip to Arlington. “It really puts things into perspective. It makes you respect the men and women of the military and everybody that’s given us the ultimate sacrifice and (those who) continue to serve.

“It was a great experience, and I hope I can visit it again someday. It would be great to win the 600 again and get to go next year, take my wife and maybe take my dad and get to experience it some more.”

WDUN will carry live MRN Radio coverage of the NASCAR Throwback Weekend from Darlington Raceway with Sunday's NASCAR Cup Series Goodyear 400 beginning at 2:30 PM on 102.9 FM, AM 550 and streaming live on AccessWDUN.