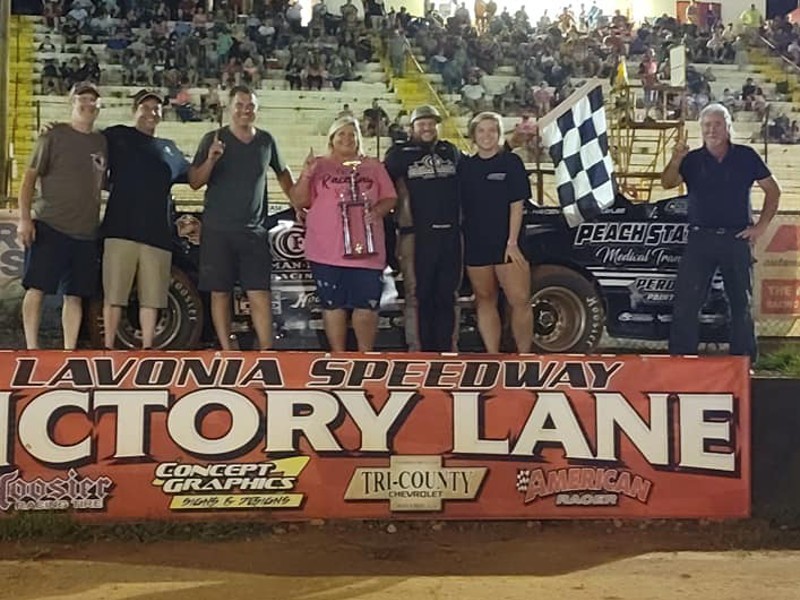 Kenny Collins added to his trophy case on Friday night with a victory in the Limited Late Model feature at Georgia’s Lavonia Speedway.

The Colbert, Georgia competitor took the lead on the start of the race, and held off Chris Woods for the win at the 3/8-mile clay raceway.

Adam Smith followed in third, with David McCoy in fourth, and Vince Fanello in fifth.

In other action, Royce Bray scored the win in the 602 Late Model feature, with Parris Simmons in second, Brady Cornett in third, Chuckie Duncan in fourth, and Michael Esuary in fifth.

Jeff Robinson jumped to the lead and stormed to the win in the Open Wheel Modified feature. Sterling Helm, Brian Nickerson, Cy Strickland, and David Dove rounded out the top five.

Ricky Chamberlain battled with Nathen Bowen, Drew Griffith and David Dove in a four car fight to take the victory in the Stock 8 feature. Greg Sanders finished in fifth.

Aiden Fortson was the winner in the Stock 4 feature. Scott Hollars followed in second, with Elliott Brayboy in third, Randy Boshears in fourth, and Zac Cox in fifth.

Dawson Locke was the winner in the Georgia Enduros feature, with Morris Lester and Noe Zuniga rounding out the podium.

Lavonia Speedway returns to action on Friday, May 6, with the second annual Rusty Jordan Memorial. For more information, visit LavoniaSpeedway.net.