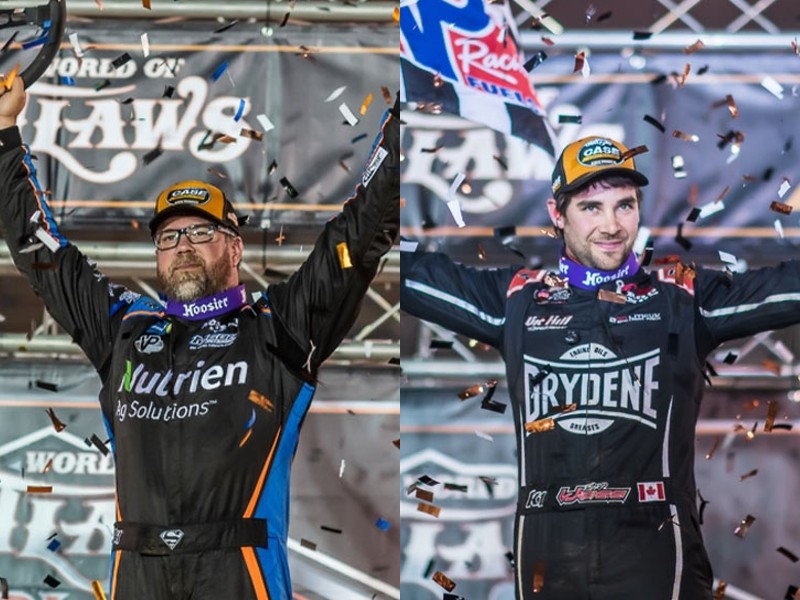 Davenport scored the victory on Friday, while Weiss closed out the weekend with the win on Saturday.

On Friday night, Davenport powered past Weiss with four laps to go, but came under fire from Kyle Larson over the final laps

Larson, who was forced to start from the rear of the field after being late to the starting grid, blasted around the top side of Bristol’s high banks from 24th to second in 27 laps, setting his sights on Davenport.

The defending NASCAR Cup Series champion continued to hammer the top with only one more car to pass and a lap to go. He swung to the outside of turn 1, but slipped up the banking as his right rear let go and he contacted the wall, ending his chances for victory.

Davenport then cruised to the victory.

It marked the third straight series win while racing with the WoO Case Late Models for the Blairsville, Georgia native, and gave him a $25,000 payday.

“The last couple of laps, I just tried to stay really wide going into the corner,” Davenport said. “I had been on the top, but obviously not as far up top as (Larson) had been. I just tried to stay a little wide in case someone was up there; I guess just to mess up their air.”

It marked Davenport’s third win in seven days and the 11th series win of his career.

“We finally got that gorilla off our back down last week in Florida, and now we’re on a roll,” Davenport said.

Weiss finished in second, with Kyle Bronson in third, Scott Bloomquist in fourth, and Chris Madden in fifth.

Scott Bloomquist, the 2004 Series champion, finished fourth in his first World of Outlaws start of 2022. The Mooresburg, TN driver struggled with his handling throughout the night.

“We’re still missing a little,” Bloomquist said. “The tire change had us off a little bit. If I overdrive, I’m a little free, and if I underdrive a little bit, I push a little. I have a little work to do for [Saturday], but I think we’re gaining on it.”

On Saturday night, Ricky Weiss bettered his finish by one position, but it didn’t’ come easily.

After starting on the pole, Weiss was bypassed for the lead by Chris Madden. But Weiss kept a cool head, retaking the lead and driving away to the victory.

“It was definitely going through my mind there what I could do to screw it up,” Weiss said. “The only thing I did different (Saturday) was search around a little bit and see if I could find anything.

“I felt like I was pretty good, and then Madden blew my doors off beneath me, and I thought, ok, I better pick it up. I was able to get back by him and then set a decent pace.”