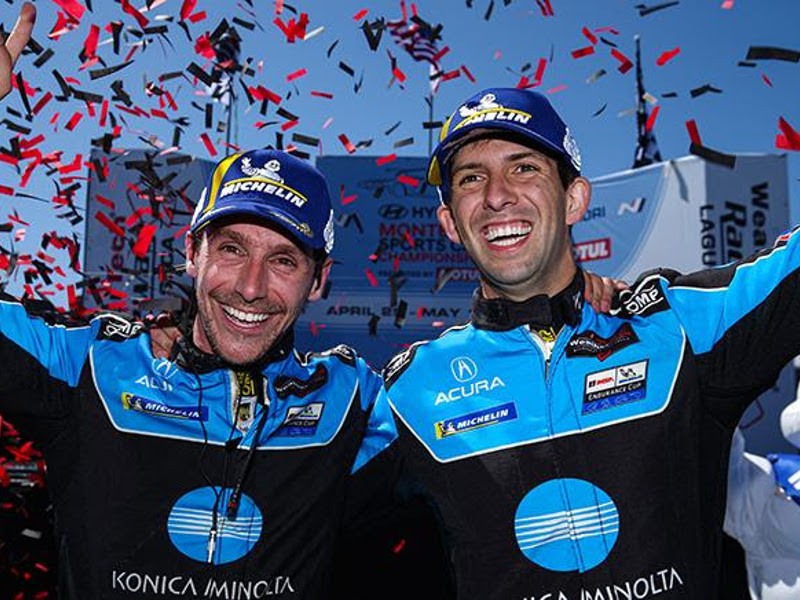 But their first race win of the 2022 IMSA WeatherTech SportsCar Championship was anything but straightforward and easy.

Albuquerque triple-stinted the majority of the two-hour, 40-minute race in the No. 10 Wayne Taylor Racing Acura ARX-05 Daytona Prototype international (DPi). He endured intense pressure from a similar Acura DPi fielded by Meyer Shank Racing with Curb-Agajanian and driven by Tom Blomqvist for more than two hours of that driving time.

The race featured a single, early full-course caution, so the result came down to which driver best navigated heavy traffic as they wound around the 2.238-mile road course on California’s Monterey Peninsula. Blomqvist actually seized the lead in the No. 60 Meyer Shank Acura for about 10 minutes, only for Albuquerque to regain it for the final time with just over an hour remaining.

Albuquerque was finally able to build a small cushion in the closing minutes and crossed the finish line 1.080 seconds ahead of a frustrated Blomqvist. The No. 31 Action Express Racing Cadillac DPi-V.R claimed third place with drivers Tristan Nunez and Pipo Derani.

Taylor sprinted to a 10-second lead to open the race before the only full-course caution of the afternoon erased the advantage he built prior to handing the car to Albuquerque.

“With me running with the ‘gentlemen’ drivers at the start, I got lucky with traffic a couple times and once you get a cushion, it’s quite easy to manage,” said Taylor, who qualified the WTR Acura on pole position Saturday with a new WeatherTech Raceway DPi track record. “Then Filipe was in against all the pro drivers in the GTs, and it didn’t work out as well for him. He was always under pressure.

“We played some strategy early which bit us and gave the No. 60 the lead,” Taylor continued. “But Filipe made it happen on the track. We didn’t want to settle for second, and he won the race.”

Albuquerque was buzzing after his two-hour-plus stint resulted in victory for the Konica Minolta-sponsored team, coming at the same track where he and Taylor claimed their most recent win last September. The No. 10 Acura led 111 of the 117 laps completed Sunday, with Albuquerque at the wheel for the final 90.

“I knew it was going to be a long stint, but the engineers said this is the best strategy to win,” he said. “I said, ‘Let’s do whatever it takes for the win.’ This was an important race for us because we know this track suits our car. So, it was very important to do pole position and win.

“We grabbed it, but it was not easy,” Albuquerque added. “We were flat out. It was a tough race, but I think that’s the beauty of endurance racing. Even if you are a couple tenths faster, traffic puts you back.”

Blomqvist thought the No. 60 Acura that he shared with Oliver Jarvis was actually faster than the No. 10.

“I had much more pace than them and we just had to bide our time,” Blomqvist said. “We did a good strategy where we stopped a lap earlier and I had a good out lap, so we were able to undercut them and managed to jump into the lead.

“Then we came across a bunch of maniacs out there,” he lamented. “I think I got the worst possible traffic at the worst time. Filipe was pretty forceful at the Corkscrew and managed to get through, but that messed up our race because there really wasn’t another opportunity to get past.”

The two Acuras and their drivers are tied for the DPi points lead, while Acura and Cadillac are now deadlocked for the manufacturer’s crown. This was Acura’s fourth straight WeatherTech Raceway DPi victory.

In the Le Mans Prototype 2 (LMP2) class, 25-year-old Swiss driver Louis Deletraz teamed with John Farano to earn a commanding victory. Five of the six LMP2 entries led laps at some point, but the No. 8 Tower Motorsport ORECA LMP2 07 was clearly the class of the field once Deletraz took over for the second half of the race.

He won by 23.211 seconds over the No. 18 Era Motorsport ORECA driven by Dwight Merriman and Ryan Dalziel.

“It was my first time at Laguna Seca, and I was just learning the track on Friday,” Deletraz said. “Straight away, I felt good, and I enjoyed it. The team did a fantastic job. I’m new to racing in the U.S. so I am learning every time, but the team gave me a good car and good strategy and we were fast.

“I had to pass a few cars, but close racing is always nice,” he added. “As a driver, it’s always nice to pass cars on the track instead of the pits, and I’m very proud of the drive today.”

The runner-up result moved Merriman and Dalziel to the top of the LMP2 driver standings by 33 points over Farano and Deletraz after two points-paying rounds. Henrik Hedman and Juan Pablo completed the LMP2 podium Sunday with a third-place run in the No. 81 DragonSpeed USA ORECA.

The longer they raced, the more they pulled away.

Mathieu Jaminet and Matt Campbell put together a dominating flag-to-flag performance Sunday to win the GTD PRO class by 31.896 seconds.

Jaminet started from the pole position and handed off the No. 9 Pfaff Motorsports Porsche 911 GT3R to Campbell with little more than an hour remaining in the two-hour, 40-minute race. The result was an easy victory and a return to the points lead in GTD PRO.

But while it looked simple, that didn’t mean it was.

“Absolutely flawless race once again, especially with the pit stops,” Campbell said. “It might have looked easy, but trying to manage a car around here is difficult at times. I think it helped on the last stint with the cars battling behind us.”

Indeed, the late drama was left for the remaining podium positions in class. Three cars – the No. 14 Vasser Sullivan Lexus RC F GT3, the No. 25 BMW M Team RLL BMW M4 GT3 and the No. 3 Corvette Racing Corvette C8.R GTD – battled for second and third during the final laps, with Ben Barnicoat prevailing in the No. 14 Lexus over Connor De Phillippi in the No. 25 BMW.

Barnicoat, who co-drove the Lexus with Jack Hawksworth, finished 1.221 seconds ahead of De Phillippi, who shared the BMW with John Edwards. Antonio Garcia finished fourth in the Corvette he co-drove with Jordan Taylor, 1.442 seconds behind De Phillippi.

“Over the years the Lexus hasn’t been the strongest car here, but we had a very good two-day test, and we knew that we’d made some good improvements to our long-run pace,” Barnicoat said. “The team worked very hard to improve that.”

Garcia and Taylor came into the race leading the drivers’ standings, but Jaminet and Campbell’s second victory of the season gave them a 50-point lead over the No. 3 Corvette duo.

“We’re back in the championship and pretty confident now,” Jaminet said. “It’s good to finish on a high for the first part of the season.”

The GTD PRO class will take the next two IMSA WeatherTech SportsCar Championship races off (Mid-Ohio on May 15 and Detroit on June 4) before returning June 26 for the Sahlen’s Six Hours of The Glen at Watkins Glen International.

Wright Porsche Carves Through Field To Win In GTD

Ryan Hardwick knew he put his team in a hole in GT Daytona (GTD) qualifying for the Hyundai Monterey Sports Car Championship. He also knew he had an ace in the hole in co-driver Jan Heylen.

Heylen drove magnificently in the No. 16 Wright Motorsports Porsche 911 GT3 R on Sunday. Once he climbed into the car with just under two hours remaining, the Belgian charged from eighth place to win the GTD portion of the race by 5.517 seconds over the No. 39 CarBahn with Peregrine Racing Lamborghini Huracán GT3.

“It was just a lot of fun,” a smiling Heylen said in victory lane. “I had a ton of fun out there.”

Heylen was especially impressive in an eight-minute span near the end, when he passed three cars to take the lead with 13 minutes to go. The No. 16 Porsche led only the final 11 laps, but it was enough to secure the second victory of the season, after Heylen, Hardwick, Zacharie Robichon and Richard Lietz won the Rolex 24 At Daytona in January.

“We had a good car all weekend, good strategy, good drive by Ryan, but I think mostly it was just understanding the track,” Heylen said. “You come here enough, understanding the tire deg, that’s the key here. I think we just did a good job of that, maybe better than some others. You’ve got to be patient here.”

The stout performance from Heylen overcame what Hardwick termed his own poor qualifying effort on Saturday, which put the No. 16 in the 10th GTD starting position.

“We’ve had a great car all weekend – the Porsche was the car to have here – and I just tried too hard in qualifying and didn’t do my best lap,” Hardwick said. “So, my focus (in the race) was to try and overtake a few cars and keep the car in a good condition for Jan because I knew he had the car to go to the front.”

The victory also put Heylen, Hardwick and the No. 16 Porsche at the front of the WeatherTech Championship GTD season standings, unofficially 31 points ahead of the No. 32 Team Korthoff Motorsports Mercedes-AMG GT3 and driver Stevan McAleer. They also closed to within 40 points of IMSA WeatherTech Sprint Cup leaders Madison Snow and Bryan Sellers in the No. 1 Paul Miller Racing BMW M4 GT3.

Jeff Westphal edged the No. 39 Lamborghini into second place Sunday at the last moment, squeezing past Bill Auberlen in the No. 96 Turner Motorsport BMW M4 GT3 by 0.037 seconds at the finish line before Westphal ran out of fuel on the cooldown lap.

“In the laps leading up to the end, I noticed Bill struggling with the rear of the car quite a bit,” said Westphal, who shared the Lambo with Robert Megennis. “He had a bobble in (Turn) 9, I aggressively attacked in (Turn) 10 and forced him to go uber-defensive into (Turn) 11, which really hurt his exit. I got underneath him on the exit, used a bit of a side draft and I was able to make it work. Really great day for the team and for Lamborghini.”

The WeatherTech Championship resumes May 13-15 with the Lexus Grand Prix at Mid-Ohio. The race will include the DPi, LMP2, Le Mans Prototype 3 (LMP3) and GT Daytona (GTD) classes.