Top drivers still looking for first win of 2022 at Dover 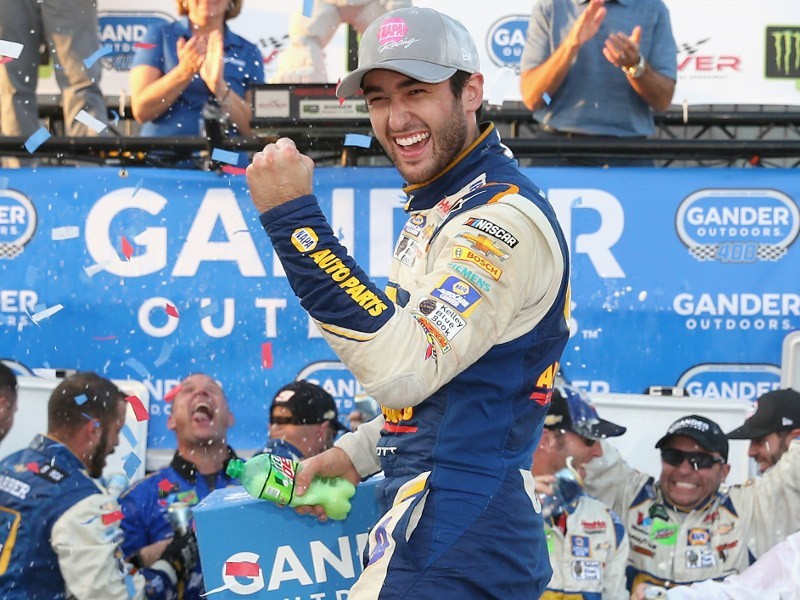 As the NASCAR Cup Series heads to Dover Motor Speedway for Sunday’s DuraMAX Drydene 400, the top drivers in the championship points standings are still looking for their first win of the 2022 season.

NASCAR Cup Series standings leader Chase Elliott is also the only member of the four-car Hendrick Motorsports team without a race trophy, but his consistency and ability to “be there” at the end has kept him atop the standings for the last three races. And Elliott is a former winner on Dover’s famed “Monster Mile” track.

Heading into the race, Elliott leads Team Penske driver Ryan Blaney by 21 points in the championship. Unlike Blaney, who has only two top-10 finishes in 11 Dover starts, Elliott has fared well on the concrete high-banks. He has eight top-five finishes – including that 2018 victory – in 11 starts.

And a win this weekend would go a long way toward solidifying Elliott’s run toward a second championship. The last time he hoisted a trophy was July 4 of last year at the Road America road course – 26 races ago.

“I want to win just as much as everyone else, if not more,” said Elliott. “I always want to win, and I always have an expectation of myself to want to go and perform.

“That expectation is the only one that matters to me, and I want to do the job to the best of my ability always, whether you have a win in the bank or not. For me, that doesn’t make me try any harder.”

Elliott’s Hendrick Motorsports team goes into Sunday’s race as an absolute favorite having finished 1-2-3-4 in the race last year – won by Elliott’s teammate Alex Bowman. The four Hendrick drivers led a remarkable 382 of the 400 laps (95.5 percent). And it marked only the third time in NASCAR history a team swept the top four finishing positions in a race. The last time it happened was November 2005 when Roush Fenway Keselowski Racing did it at the Homestead season finale.

Largely thanks to Jimmie Johnson’s record 11 victories at Dover, Hendrick is the winningest team at the track with 21 victories. Since 2013 – a span of 17 races – only three teams have won on the Monster Mile, with Hendrick’s eight trophies the most in that time, followed by Joe Gibbs Racing (five wins) and Stewart-Haas Racing (four wins).

That certainly bodes well for a Hendrick team which has all four drivers – Elliott, William Byron (third), Alex Bowman (fifth) and reigning series champion Kyle Larson (eighth) ranked among the top-10 in the series driver standings. Byron and last week’s Talladega race winner Ross Chastain are the only drivers in the series with multiple wins (two each) so far this season.

Not only is Elliott among the favorites to score a season first win at Dover – he’s joined by three other former NASCAR Cup Series champions, who are also good at this track and also looking for their first trophies of the year.

Past series champs Kevin Harvick, Kyle Busch and Martin Truex, Jr. boast the most NASCAR Cup Series wins among active drivers at Dover – all with three victories each. Harvick, driver of the No. 4 Stewart-Haas Racing Ford is the most recent winner among the trio with a trophy in 2020.

Harvick, 46, the 2014 series champion is ranked 11th in the standings with only a single top five (runner-up at Richmond) and 12 laps led right now. He’s finished sixth or better (including two wins) in the last seven Dover races.

Truex broke an uncharacteristic run of back-to-back sub-20th-place finishes with a fifth place showing at Talladega last week. He’s ranked eighth in the standings with a best finish of fourth place at Richmond earlier this month. The 2017 series champion scored his career first NASCAR Cup Series win at Dover in 2007. He answered a 2019 win there with three consecutive runner-up finishes before a 19th-place run last spring.

This will be the first test for the new Next Gen car on Dover’s concrete high-banks and while drivers aren’t sure exactly what to expect, they say they are looking forward to the Dover test.

“It’s a hard track to get right anyways but throw in a new car and limited track time, it’s going to be difficult,” Truex said. “I love going there though, so I’m really looking forward to it.”

Dover Offers Monster Of A Good Time For Xfinity Series

Following Noah Gragson’s victory in a dramatic overtime finish at the NASCAR Xfinity Series’ biggest track last weekend at Talladega Superspeedway, the series moves Dover Motor Speedway for a test on the “Monster Mile” this week.

Saturday afternoon’s A-GAME 200 at Dover presents a unique challenge to the Xfinity Series championship with only one of the series’ fulltime competitors having ever won this race previously.

Two-time Dover winner Justin Allgaier is hopeful that his track record will push him forward in the points and into an already tightly grouped trio atop the championship.

Allmendinger has top-10 finishes in every race this season topped with a victory at the Circuit of The Americas in Austin last month. The driver of the No. 16 Kaulig Racing Chevrolet has only a pair of Xfinity starts at Dover – with a best finish of fourth-place last year – and has never led a lap there.

Gragson’s Talladega victory was his second of the season. His first came at the other one-mile track, Phoenix Raceway, which gives him plenty of momentum as the series arrives in Dover.

Gragson has never won on the Monster Mile, but he does have four top-10 finishes in six starts with a best showing of fourth place in 2020. He’s led only 38 laps at Dover during that time – but neither of his other closest championship challengers – Allmendinger or Gibbs – have led even a single lap at the track.

This will be only the second Dover start for Gibbs, who will be looking to regain momentum after a tough Talladega race. Involved in an accident on the big track, Gibbs finished 35th suffering only the second DNF in 27 career Xfinity Series races to date. Gibbs’ three wins and 330 laps led in 2022 are most in the series. He finished fifth in his only Dover race last year.

Which brings us to Allgaier, who boasts a top-five finish in half of his 21 Dover starts, including wins in 2018 and 2020 and three runner-up showings. In the last 12 Dover races, he has 11 top-10 and nine top-five finishes – including the two victories. His 447 career laps led is most among Xfinity Series regulars and twice he’s led 100 or more laps in a Dover race.

It all speaks well for a potential Dover rebound to Allgaier’s 2022 season. He’s currently ranked sixth in the championship, 121-points behind Allmendinger, but has finished 22nd or worse in four of the last five races. His best finish of the year is fifth (at Daytona and Las Vegas). His last win came almost exactly a year ago – May 8 at Darlington.

“I can’t wait to get to Dover this weekend with our No. 7 team,” Allgaier said. “We’ve been really strong there the last couple of years and I feel extremely confident that we are going to pick up right where we left off when we hit the track for practice on Friday. Hopefully, we can have a solid, smooth weekend and be right where we need to be, come race time, to right for the win.

The Dover race marks the Dash 4 Cash program’s 2022 finale. Gragson, Landon Cassill, Allmendinger and Ryan Sieg are qualified to win the $100,000 bonus check this week following their work last week at Talladega. The highest finisher among them earns the bonus cash from sponsor Comcast Xfinity. Allmendinger has won two of the three Dash 4 Cash prizes to date.

WDUN will carry live MRN Radio coverage of the NASCAR race weekend from Dover Motor Speedway, beginning with Saturday's NASCAR Xfinity Series A-Game 200 at 1 pm on 102.9 FM and streaming live on AccessWDUN.  Coverage continues on Sunday with the NASCAR Cup Series DuraMAX Drydene 400 beginning at 2 pm on 102.9 FM, AM 550 and streaming live on AccessWDUN.